“Billions is still very much intact, but what’s exciting is how things are changing.” 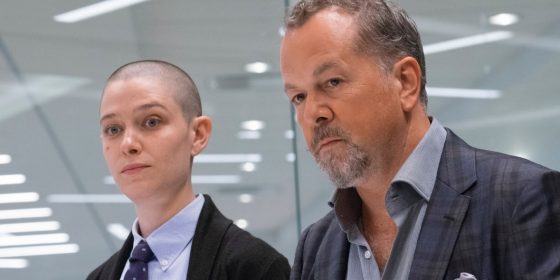 Every time a TV show returns for a new season there’s the question of whether it can sustain the momentum of its previous years. Billions crafted something special in its second season, really clarifying its vision in a way that felt exciting. Naturally, that leads to questions for season 3. Was the second season just a fluke? Can the show continue to craft something that’s unlike anything else on TV? Will the dialogue, characters, and ludicrous power plays start to lose their luster? The season 3 premiere, “Tie Goes to the Runner,” is a welcome affirmation that Billions isn’t slowing down any time soon.

The opening scene is, on its own, enough to quell any doubts about a slump for this show. Chuck, riding high on his takedown of Axe Capital and his run for governor, walks into a meeting with the Attorney General in Washington, DC. Billions doesn’t bother easing into the season, instead immediately giving us a scene of pumped-up macho dialogue. The AG, who’s interested in having Chuck lay off of his prosecution of various Wall Street types, presumably because he’s getting paid somewhere along the line, goes on a lengthy tangent about being from “horse country” and “baseball country” in West Texas. The man is a walking cliché, all Texas bluster and salt-of-the-earth metaphors that barely make any sense. He’s the type of guy who considers himself a cowboy or an outlaw despite his comfy seat at the head of the capitalist table.

It’s a stirring scene to kick off the season, largely because it immediately establishes that despite his recent win, Chuck is hardly the biggest fish in the pond. He still has plenty of people above him calling the shots, and it’s clear that the attorney general isn’t going to be amused by anyone refusing to follow his orders. Now, Chuck has to question the very strategy he’s built his career on. When he goes back to the office he tells Kate that they need to pull back on their prosecutions of corrupt businessman, something he does with a fair amount of anger and regret.

However, the consequences of last season’s events mean that everybody is having to compromise. Axe Capital’s assets have been frozen by Oliver Dake, who’s prosecuting the case along with Bryan, and that leaves Taylor, who’s running the company in Axe’s absence, with little to rile up the troops. Everybody is sitting on their hands and very, very sick of it. Thus, Taylor tells the team that they’ve booked a spot at an “ideas meeting” where the 10 best hedge fund managers in the city meet to discuss plays that could benefit everybody. Normally Axe Capital wouldn’t participate — Axe loves being the lone wolf — but with no money to play with, all they have is ideas and influence.

Of course, not every compromise or consequence is financial. At the end of last season Axe’s marriage was in tatters, and Wendy and Chuck were possibly finding their way back to each other after a lengthy feud. Not much has changed for Lara and Axe. Axe isn’t living at home — he has a swanky, gigantic, depressingly empty suite downtown that mimics his current mental state — and the two are at odds when Lara comes into Axe Capital in order to make sure that her assets are being managed properly. They’re butting heads, but by the end of the episode Lara hasn’t sworn off Axe’s influence, at least with their money. Their marriage is another story.

Chuck and Wendy initially seem to be doing better. Wendy is back to psychologically advising Axe, and she ends up back at home with Chuck at the end of the day. Later on in the episode, though, Chuck tosses and turns in the night, and Wendy talks about how they “cut their visits short,” that they didn’t invest enough time in their marriage as it tried to recover from their fight. It seems like she’s talking about a therapist, but their final scene of the episode sees them in a BDSM club, Chuck begging Wendy to tell him all the nasty details about the affair she had while they were separated. Just a kink, or is it something that suggests Chuck and Wendy haven’t healed just yet?

“Tie Goes to the Runner,” despite all of its charms, is still very much a season premiere. There’s a lot of setup, a lot of checking in with characters, and not a whole lot of action. That’s necessary, but it’s also not what makes Billions so great. With that said, what the premiere has set up is certainly compelling. It feels like the show is shifting in ways that will pay off in the long run. Most importantly, Billions is becoming about more than just bad blood between Axe and Chuck. The show is expanding, and it’s doing so in promising ways.

Taylor, of course, is at the center of that change. They were the standout of last season and seem poised to take that honor again this season. Taylor is the one with promise not just for Billions, but for Axe Capital. They’re the one steering the ship while its captain figures out how to avoid criminal charges. By the end of the episode, it’s Taylor, and not Axe, who’s walking into the “ideas meeting” with an idea about trading on smart chip technology that was thought to be impossible. They cracked it, and now they’re running with it.

Everything is changing. Todd Krakow is now the treasury secretary, and he’s trying to recruit Taylor. Ira has a tense meeting with Chuck, their whole relationship nuked by Chuck’s use of Ice Juice to take down Axe. In fact, everything around Chuck has changed. He’s the catalyst. Black Jack Foley is still backing him for governor, but Chuck Sr. wants no part of his son’s life or political ambitions. Add in the uncertain relationship with Wendy, and the fact that he’s not actually in control of the Axe Capital case, and suddenly Chuck’s win doesn’t seem so satisfying. Dake actually compares him to a man who’s committed a crime of passion: In the moment it felt great, but now it’s the next day and there’s blood everywhere.