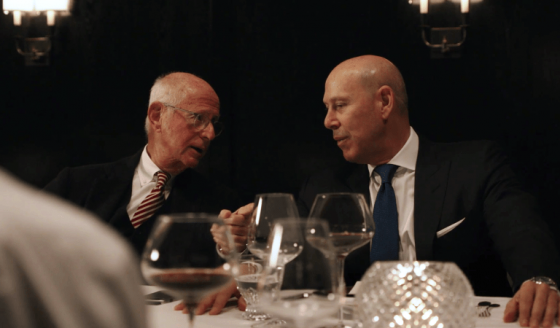 Known in the food world as a low-key excellent restaurant arbitrator, Showtime show Billions premiered its third season on Sunday night and highlighted three well-regarded New York City restaurants. Wo Hop, Veselka, and Del Posto all made the cut this go-round.

Billions chronicles the life of hedge fund titan Bobby Axelrod (played by Damian Lewis), who a U.S. attorney (Paul Giamatti) is trying to take down. Axelrod’s rich antics take him to many restaurants around NYC, and various outlets, from Eater to Esquire to Thrillist, have praised the dining choices. Past locations have included Momofuku Ko and Ssäm Bar, Katz’s, Sushi Nakazawa, Keens, Crif Dogs, Peking Duck House, Peter Luger, and more.

With Season 3 starting, it’s clear that tradition will continue. All three restaurants featured are food lover destinations: Wo Hop is known as a late night Chinatown must, and longtime East Village Ukrainian diner Veselka is an NYC essential. (This isn’t Veselka’s first turn in the limelight; it also has an upcoming cameo in Ocean’s 8.) The show has gone to Mario Batali restaurants before — Babbo was in a prior season — and the Del Posto scene was shot last fall. Since then, the Chelsea fine dining Italian restaurant took a reputation hit when allegations of Batali’s rampant sexual misconduct surfaced.

Read the rest of the original article at NY Eater