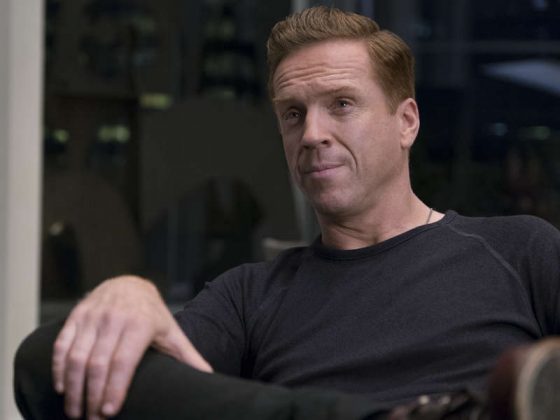 My Billions naïveté—I binged the first two seasons just this year as aggressively as Wags snorts painkillers, and it went by in a blur—got the better of me, because I assumed we reached the summit of the show’s absurdity with last week’s episode. I mean, how do you top two thespians in Paul Giamatti and Jeffrey DeMunn snogging at the front door of a lavish brownstone? Where does Billions go from here?

But I will never doubt Billions again. This week’s episode, “Flaw in the Death Star,” not only has the pettiest, most bonkers feud outside of Axe and Chuck’s ceaseless dick-swinging, but a totally unexpected coupling, and a ridiculous amount of imaginary flashbacks about, quote, a “good doctor.” This week’s superlatives are an all-timer—let’s get started.

I don’t mean to disparage Connerty—the Robin Hood of the Bronx who wants to imprison the rich and buy street hot dogs from the middle-class—but I think getting aroused by the thought of taking Axe down is a little too much. And yet, he freely admits that “sometimes,” when he’s having sex with his flight attendant girlfriend McKayla, he is thinking of such things.

“I might be able to tell the times that you do,” she replies, with the right amount of concern. It’s probably not that hard [tries not to imagine Connerty shouting “GUILTY, YOOR HONAH” mid-climax] to know when that does happen.

Two things. One, I’m genuinely surprised Spyros didn’t purchase a Lamborghini—the unofficial luxury sports car for millionaires with low self-esteem—but maybe he hasn’t made enough money yet. Second, Spyros owning and wearing a Porsche racing jacket while he drives the car through Manhattan is the least surprising part of this episode.

There is one thing on Axe’s mind this episode, and that is his “good doctor” (no relation to Freddie Highmore), Dr. Gilbert. Gilbert’s the one who assured Axe that his tainting of Ice Juice’s IPO with bacteria last season wouldn’t be fatal to the people who bravely sacrificed their bowels for the cause, and he was the last person who had the sample of the bacteria. Axe asked him to destroy the evidence, but never actually saw that happen.

He’s imagining myriad scenarios of what Dr. Gilbert did with the utmost clarity. For a moment, I thought he swallowed the Limitless pill. Needless to say, all these hypotheticals—there are a lot of them!—are moot, because for what feels like the first time, Axe can’t get an accurate read on someone. But his process—if you can call it that; he might have powers, Damian Lewis did once call Billions a “superhero show”—was truly unforgettable. 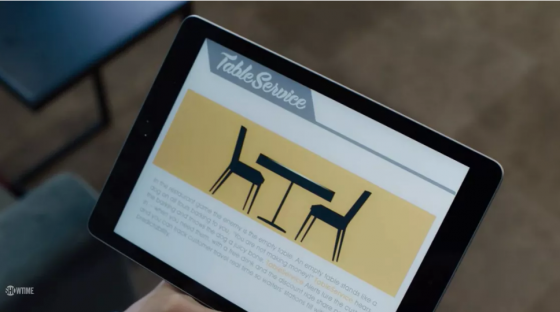 This sounds like something out of HBO’s Silicon Valley, specifically from Jian-Yang. 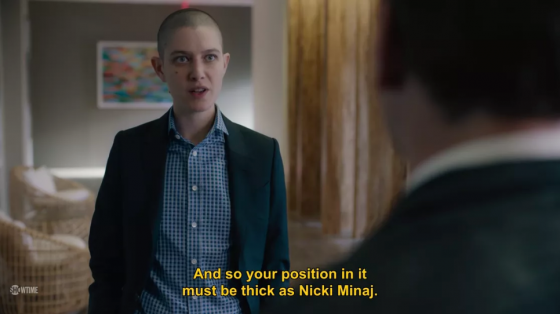 Taylor is really not a fan of Table Service, sorry Oscar!

There is no winner in this episode’s Dollar Bill-Spyros feud; only losers. In one corner, you have the repugnant, cheap AF, vest-loving money guy whose best plays are also Axe Capital’s most criminal—and in the other corner, you have Spyros. (I hate to admit this, but Spyros made a really excellent latte.)

Spyros won’t approve Dollar Bill’s short play against a pharmaceutical company—and for good reason; it’s under shady pretenses. But Spyros also said, “You think because the cat’s away, the Bill will play?” so he’s terrible and also wrong. And then the verbal punches are thrown:

It is worth watching the entire exchange, even if it means forking over money for a Showtime subscription. They go to Wendy’s office for what’s essentially couples therapy and Dollar Bill brags about having never needed therapy despite having two families. We need an entire Ryan Murphy Feud season of this. 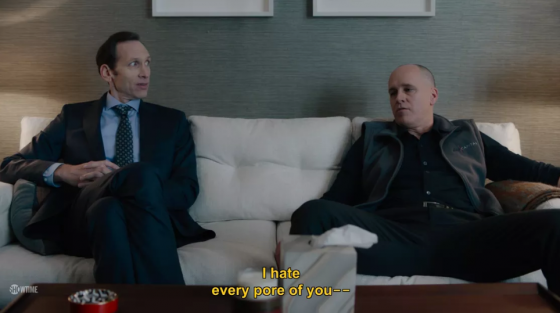 Dollar Bill eventually has to concede on the pharma short play—Axe also insists that his shadiest dealings are run through Victor going forward as to not call attention to himself—and is also forced to publicly apologize to Spyros in front of the entire company. Acknowledging Spyros is a “human man” in the apology is a nice touch. But hey, feud’s over, right?

OH MY GOD I FEEL SO ALIVE. SPYROS, RETIRE BITCH. 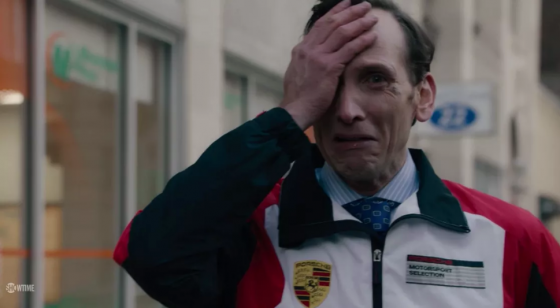 Most Unnecessary Proof of Loyalty

(This was an amazing Dollar Bill episode.)

Best Memory of the “Old Times”

When we were introduced to Oscar last episode, his deep Middle Earth reference that didn’t register with Axe made it apparent he was a giant dork. He doubled down on that this week, when he and Taylor both attended a Netrunner tournament—which is basically a cyberpunk fantasy card game, or, in other words, exceptionally nerdy shit. (What happened to a good Yu-Gi-Oh! duel?)

Anyways, the chemistry went from nonexistent to palpable in a matter of minutes; next thing you knew, Oscar was taking Taylor home and they were hooking up!

Good for Taylor! They deserve to have some fun; though because of this Billions, I still don’t fully trust Oscar, because when have relationships on this show been healthy and fulfilling? Connerty might have the healthiest current relationship of anyone and he thinks about sending rich people to jail while he’s having sex! 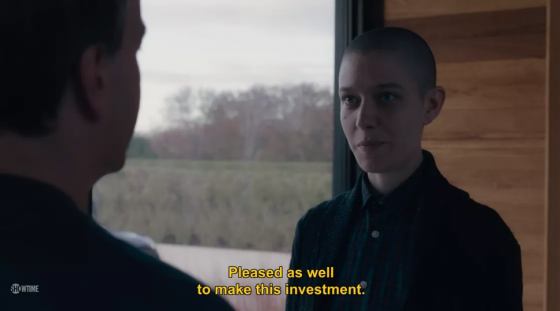 Remember Lawrence Boyd, the man trapped in a David Lynch movie hallway during his prison sentence last season? Well, Chuck meets with him again—in a Lynchian storage room filled with boxes that say “BOYD,” no less. 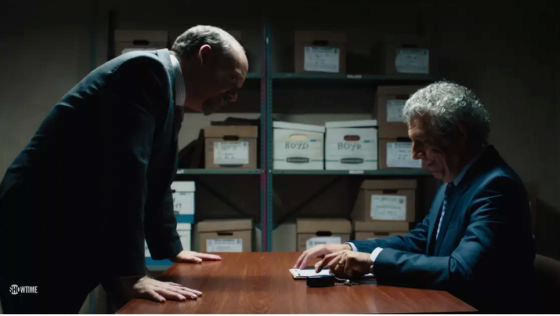