There Is No ‘Flaw In The Death Star’ 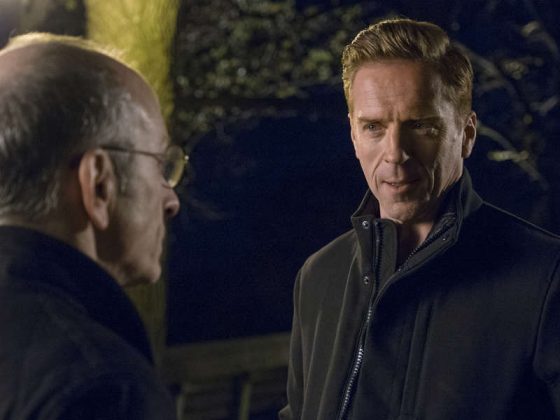 The latest episode of Billions is fast-paced, packed with intriguing plot lines and this week there’s a storyline that show creators Brian Koppelman and David Levien kept tightly under wraps. If you haven’t watched, there are spoilers.

In this episode entitled “Flaw In The Death Star”Axe (Damian Lewis) and Chuck (Paul Giamatti) are at it again, this time fighting for the loyalty of the same witness: the doctor. Axe may have had his favor at one point in time, but by the end of this episode, Chuck is in the lead and Axe knows it. Chuck also keeps himself busy trading favors with his co-conspirator, Lawrence Boyd (Eric Bogosian). As if he doesn’t have enough irons in the fire, Chuck needs to watch out for Connerty (Toby Leonard Moore) as he’s become increasingly obsessed in his search for the truth.

As Connerty gets closer, he approaches Kate Sacker (Condola Rashad) claiming to know Chuck has done something that will take the whole office down. He can’t quite put his finger on it, but he knows it has to do with the fact Boyd is no longer in prison. When Sacker confronts Chuck asking why Boyd is, in fact, a free man, Chuck admits he secured Boyd’s release because he was instrumental in bringing Axe to justice. Connerty asks the judge to unseal his order re-sentencing Boyd for time served, but Sacker argues to keep the order sealed. Connerty’s request is denied. Dollar Bill (Kelly AuCoin) plans a big short position on a pharmaceutical company stock, but not everyone at Axe Cap approves.

The focal point of the episode, however, is the romance between Taylor Mason (Asia Kate Dillon) and Oscar Langstraat (Mike Birbiglia), which was beautifully written and acted. Dillon’s Taylor is the first gender non-binary character on a mainstream television series.

“There’s likely to be an inherent intrigue around this relationship,” says Dillon, who also identifies as gender non-binary. We spoke about the responsibility of portraying Taylor and the gratitude Dillon has for Koppelman and Levien, as well as Showtime, for the opportunity to play such a pivotal role.

Before the second season of Billions came out last year, Showtime gave Dillon a choice: to really shine a spotlight on the fact Dillon identifies as gender non-binary, or not. “They said if I didn’t want to be out in the public eye, they wouldn’t do it. I felt respected and empowered. But, I know that visibility and representation save lives.”

The character was written before Koppelman and Levien knew about, or met, Dillon. “Taylor was always written as a person that had been assigned female at birth and identified as gender non-binary; a person whose gender identity falls outside the boxes of man or woman,” Dillon explains. Since Taylor doesn’t identify as a man or a woman and exists outside the traditional gender binary, there isn’t a use of the pronouns he or she or hisor her. Instead, the pronouns they, them and their are used.

This season, Taylor takes on the position as Chief Investment Officer at Axe Capital in Axe’s (Damian Lewis) stead. “We thought it would be a fascinating collision to include a person that is part of a culture that is not normally walking the halls of Axe Capital, that has skills that are very valuable to Axe, and seeing him become interested in Taylor on an intellectual level, despite the outer package not being what he’s accustomed to. We deepened and continued to grow Taylor’s character for this season,” Koppelman said recently.

A few years before being cast on Billions, Dillon removed all pronouns on social media. “I just used my name. When I came across they, them andtheir, it just felt right. I always felt like my gender identification was not boy/girl or man/woman.” As to when Dillon first identified as gender non-binary, Dillon says it’s not really possible to put a specific age to it. “This is a process I was going through before I had language to put to it. Had a word been available, had there been an option such as gender non-binary, I’d have picked it.”