The Family We Choose 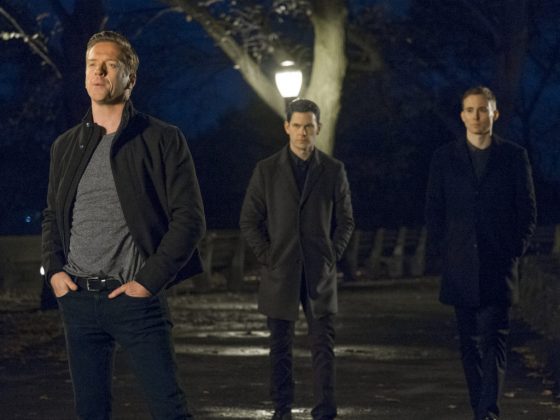 This week on “Billions,” romance is in the air. Who’da thunk it, right? Sex, sexuality, the rewards and compromises of long-term relationships, even the eroticized thrill of spectacular professional success — these themes are never in short supply on this show. But the pangs of infatuation that make your eyes widen, your heart quicken, and (with any luck) your clothes melt away to the tune of Echo and the Bunnymen? That’s … unexpected.

Even more unexpected? The young lovers involved. The casting of comedian Mike Birbiglia added an uncharacteristically mellow presence to this high-strung, hard-charging show. If you predicted that this addition was a prelude to an affair between Birbiglia’s Silicon Valley “venture philanthropist” character, Oscar Langstraat, and Bobby Axelrod’s handpicked successor, the tightly wound gender-nonbinary genius Taylor Mason, congratulations: Your powers of prognostication outstrip even those of Axe himself. Yet from the moment these two very different visionaries make a nerd-love connection in defense of a supposed “Star Wars” plot hole, it makes sense, retrospectively, that they would hook up. It just feels right. (Granted, I’m slightly biased in that I agree with their reasoning — “What material could withstand the heat expended from that mammoth sphere?” “Plus, it was fortified with gun turrets!” — but only slightly.)

Predicated on a trip to San Francisco designed to further the connections between Oscar and Axe Capital, the story line is successful mainly because of how exciting it feels to see Taylor, well, excited by something. Asia Kate Dillon’s portrayal of this blue-eyed brainiac is rooted in a Spock-like blend of ironclad logic and an outsider’s insight into the prevailing culture. To see the flush of a crush on Taylor’s face, melting that resolve and reserve, is a beautiful thing. The subsequent sex scene between the two characters is sweet, hot and groundbreaking in equal measure. You’d be a fool to ignore any one of those three indissoluble elements.

An even odder, and far unhappier, couple dominates the action back in New York. It’s a battle of pig versus prig at Axe Cap, as the gleefully macho and amoral Dollar Bill Stearn clashes with the company’s compliance officer, Ari Spyros — Chuck Rhoades’s one-time frenemy at the Securities and Exchange Commission, now working for the full-on enemy — over the kind of insider trading he used to be able to get away with as a matter of course. A “this firm ain’t big enough for the both of us” battle ensues that sends Wendy in search of a stiff drink — not least because she recognizes its similarities with the war between Chuck and Bobby.

Axe and his lieutenant Wags eventually set Spyros straight as to the nature of his role at the company: He’s there not to stop them from cheating, but to help them push up against the limit without tipping over. They secure his loyalty with dinner for three at Daniel, chef Daniel Boulud’s Michelin-starred restaurant on the Upper East Side (and only for three — Axe buys out the whole restaurant); a pledge to treat him like family; and a forced public apology from Dollar Bill.

But greed means never wanting to say you’re sorry, and sure enough, Bill retaliates by repeatedly ramming Spyros’s prized Porsche with his S.U.V. It’s a welcome showcase for the comedic talents of actors Stephen Kunken and Kelly AuCoin as Spyros and Dollar Bill, both of whom are delightfully insufferable. (The awkward way they shake hands on their truce alone is a scream.) It’s also proof that “Billions” has developed a “Sopranos”-like knack for creating self-contained side plots for its supporting players that flesh out the show’s world while enhancing our appreciation for its core themes.

As all this is happening, Bryan Connerty finds himself in the unenviable position of becoming the Spyros of the federal prosecutors’ offices. A conversation with his girlfriend, a flight attendant on the corporate jet that once belonged to the disgraced banking titan Lawrence Boyd (played by a returning Eric Bogosian), gives Bryan the bright idea of using Boyd as a back door into a collusion case against Chuck for his role in the Ice Juice case. Bryan deduces that Boyd, who was sprung from prison the day the Juice got cut loose, was the messenger Rhoades used to tip off Axe about his and his father’s investment in the stock, thus luring Axe into the trap that took him down.

But when Connerty reaches out to his friend (and ex-girlfriend) Kate Sacker for help, she opts to use Boyd for her own ends instead. In exchange for his testimony against other executives at his former company, Kate and Chuck offer Boyd his confiscated yacht and passport, which he uses to fly the coop as soon as the deal is done. Kate and her colleague Karl Allard (the avuncular actor Allan Havey, best known as the superlatively square ad man turned cartoonist Lou Avery on “Mad Men”) even use an old notepad to forge backdated evidence to hide Chuck’s involvement in Boyd’s release. Bryan knows he’s been played, but that and $2.75 will buy him a subway ride.

Bobby Axelrod faces a similar dilemma. He and his inseparable, grim-visaged security gurus (played with straight-faced hilarity by Tom Lipinski and Brian Wiles) have been struggling to stop Dr. Gilbert, the oncologist Axe employed to test the potency of the poison used to spike Ice Juice, from making a deal to testify.