From the West Coast to the East Coast 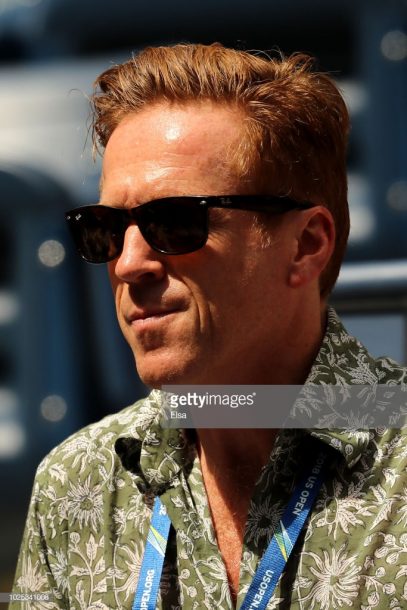 Our Englishman is back on the East Coast from filming Once Upon a Time…in Hollywood in Los Angeles! He, along with Vogue Editor-in-Chief Anna Wintour and Bee Shaffer (daughter of Wintour), attended the match of Roger Federer of Switzerland and sat in Federer’s players box at Arthur Ashe Stadium on day four of the U.S. Open.

The tournament was held at the USTA Billie Jean King National Tennis Center Complex, Thursday, August 30, 2018 in the Flushing Meadows neighborhood of the Queens borough of New York City.

Here is the order of play:

Perhaps Damian is also in attendance to lend support to Maria Sharapova, who helped Bobby Axelrod work on his backhand shot in Billions season 3, episode 10 here.

Before the tournament began Damian hit the Blue Carpet for a fun interview by playing a match game – tennis player version. He was asked which Shakespearean character does Roger Federer, Serena Williams, Venice Williams and Rafael Nadal most closely align with. Find out his answers below and for the full video click here.

During the broadcast, Damian’s hit television show Billions on Showtime got a shoutout from John McEnroe:

@briankoppelman "I love Billions. It's a great show" — John McEnroe, when Damien Lewis appeared on tv sitting in the stands at the 2018 US Open.

And of course, Damian tweeted out his thanks to Roger Federer:

Thanks @rogerfederer for inviting me to your player's box yesterday. Loved your mum and dad. Eccentric game against a wayward Benoit Paire. Roger had to concentrate hard to get the job done but he's the best so guess what…..he did.