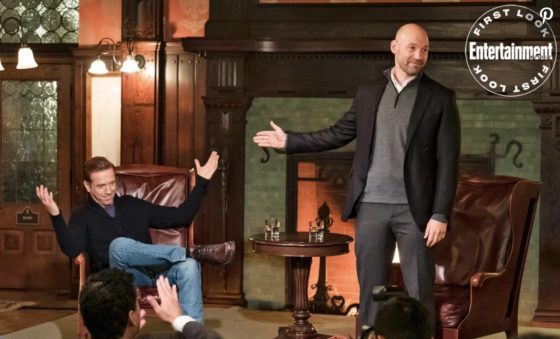 Billions has made two big acquisitions for season 5.

EW has an exclusive first look at Julianna Margulies (The Good Wife) and Corey Stoll (House of Cards) in the upcoming installment of Showtime’s hit drama. Invest your time in the new teaser here, and the images here.

Series creators Brian Koppelman and David Levien tell EW they’d been trying to enlist the two actors since Billions launched in 2016, but the timing never worked out. Or, as Stoll says with a laugh, “Frankly, I was holding out for something a bit more exciting in terms of the role.” Either way, Koppelman and Levien’s persistence paid off.

“Julianna is one of the smartest actresses working,” Koppelman says. “The way in which she can make any kind of dialogue sound like her own seamlessly fits into our world.” Having previously mastered medical and legal jargon on ER and The Good Wife, Margulies jokes, “I’m just really grateful that I don’t have to do any of the financial dialogue.”

As for Stoll, Levien says they’d been hell-bent on working with him since he filled in at a table read on one of their past films. “We were able to write a character for him that is smart, aggressive, and charismatic, all the things that he’s built to play,” he says.

That super-rich role for Stoll is small-town business titan Michael Prince, who comes into Axe’s (Damian Lewis) orbit, causing sparks to fly. “From our very first scene, we’re sparring,” Stoll says of Prince and Axe’s dynamic. “He has that same competitive streak as Axe, but it’s tempered with this drive to do good. There’s a lot of conflict between Prince and other characters, but stronger than that is the fight within himself to reconcile being a capitalist and a good person.”

Unfortunately, the Billions team doesn’t want to reveal too much about Margulies’ Catherine Brant, an Ivy League sociology professor and best-selling author. “She’s a conduit for Chuck Rhoades [Paul Giamatti] finding another side of himself,” Margulies teases. “She comes from a place of nonjudgment and isn’t deterred by his behavior, which he finds quite enlightening.”

Read the rest of the original article at EW