On Stage Together Next Year? 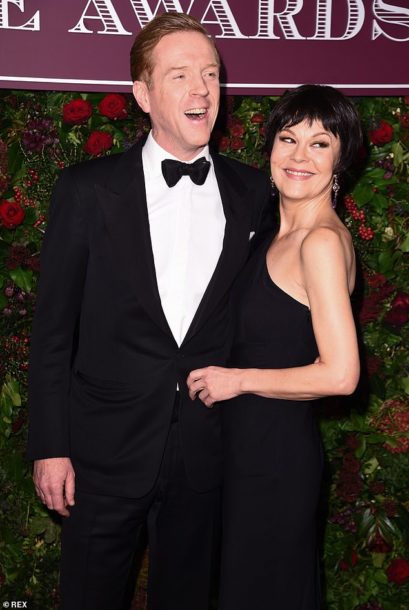 Helen McCrory and Damian Lewis have been toying with the idea of making their first West End appearance together — hopefully next year, if their respective upended commitments will permit.

The couple fell in love when both were cast in the play Five Gold Rings at the off-West End Almeida Theatre back in 2003.

‘Damian and I would love to do something on stage together,’ McCrory told me. ‘We’ve been in long discussions.’

Tantalisingly, she added: ‘Rights are being bought’ to a 20th-century classic (which could be a comedy) that she declined to name until contracts are signed.

Things such as his roles in Homeland, Wolf Hall and Billions.

And her stellar cast of characters: the glamorous but lethal Aunt Polly in Peaky Blinders; Narcissa Malfoy in Harry Potter; and now Sonia Woodley, the QC who represented Charles Ingram — aka the ‘Coughing Major’ — in Quiz.

The TV mini-series, sublimely written and directed by James Graham and Stephen Frears, respectively, will be broadcast on ITV for three consecutive nights from April 13. The cast is pretty awesome, too.

In addition to McCrory, Matthew Macfadyen plays Ingram, Sian Clifford is his wife Diana and Michael Sheen tackles the role of Who Wants To Be A Millionaire? host Christ Tarrant.

Quiz is a sharply observed dissection of the murkiness behind game shows and how, as McCrory puts it, they often exploit the vulnerabilities of contestants.

‘There’s a responsibility towards those people,’ she told me.

McCrory stressed that what writer Graham has her say in the courtroom scenes is based on Woodley’s arguments when defending Ingram, but is not word for word.

‘I needed to play her as James Graham’s Sonia Woodley,’ she explained of her astute portrayal of the lawyer.

But she did meet Woodley briefly on set.