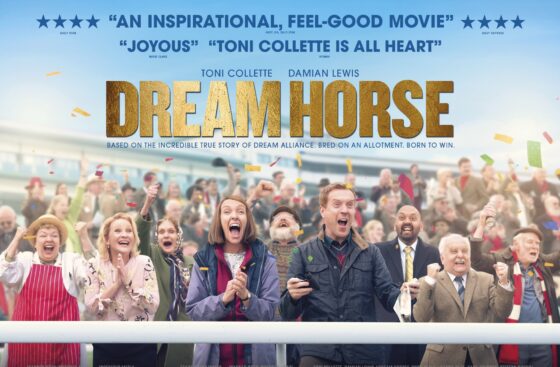 The hard-luck residents of a Welsh mining town find new hope in this satisfyingly sweet true story about a racehorse that beat the odds.

A charmingly guileless crowd-pleaser about a lovable group of working-class stiffs and red-faced retirees in a former South Wales mining village who find new reason to get out of bed in the morning when they pool their resources and invest in breeding a thoroughbred, Euros Lyn’s “Dream Horse” is more than a little hackneyed for something based on such an amazing true story. And yet, the Rocky-like theatrics that dominate the home stretch — already familiar to anyone who remembers Louise Osmond’s equally winsome 2015 documentary on the subject, “Dark Horse” — are perhaps the least compelling aspect of a light matinee that can fray around the edges as it strains to thread the needle between “The Full Monty” and “Seabiscuit.” On the contrary, “Dream Horse” hits its stride off the track, where the paint-by-numbers drama of winning and losing takes a backseat to a more nuanced tale about the need to get back in the race.

The movie refers to it as hwyl, a Celtic term that loosely translates to “a feeling of emotional motivation and energy.” It’s joie de vivre. An animating force. What Iggy Pop would call a lust for life. Alas — by any name, and in any language — it’s sorely missing from the industrial village of Cefn Fforest. A downtrodden gully pockmarked by slag heaps and old mine heads that don’t seem inactive so much as forgotten, the place is defined by the dormant sense of purpose that’s seeped into the people who live there.

That’s especially true of Jan Vokes (the impeccable Toni Collette, mixing loud eyebrows with quiet desperation), an animal-loving bartender and co-op cashier who once raised pigeons with her dad before life hardened for them both. These days Jan is an empty-nester who only keeps a few stray ducks in her kitchen so that she has something to care for, but the love they show her in exchange for a few breadcrumbs every morning is more than she gets from her toothless husband Brian (Owen Teale), whose idea of romance is critiquing videos of alpaca castrations on TV (there’s an art to them, you know). There’s a kindness to Brian, but his dental situation suggests a complete surrender to the dull rhythms of his twilight years.

But a little hope can go a long way, and that’s exactly what Jan gets when she overhears a tax advisor from out of town blathering on about his glory days in a successful racehorse syndicate. Maybe it should be a red flag that a big city type from Cardiff needs to come all this way just to find people who might be impressed by his achievement — casting “Billions” star Damian Lewis as Howard Davies lends the soft-hearted character a valuable edge — but Jan is electrified by his enthusiasm.

Besides, it’s not about the money. More accurately, it’s not about making money, even though everything hinges on the fact that these people don’t have very much of it. The first thing that Howard says at the initial syndicate meeting (staged around a pool table that sits under a pair of coin-operated lights) is that no one should expect to make a profit, let alone get rich. Less than one percent of racehorses ever pay out, but for €10/week these blue-collar people will get to believe in something bigger than themselves. There’s always an endearing village alcoholic in movies like this, and the one in “Dream Horse” also doubles as the resident truth-teller: “Do it for the hwyl,” he says. The next thing you know, a rusty old truck that reads “ORSES” is bumping through Cefn Fforest with a budget-rate mare in the back.

All manner of rustic cuteness ensues, mercifully little of which comes off as cheap or patronizing to the people who live in South Wales and hosted this on-location shoot. Neil McKay’s script doesn’t take many chances with the form, but it’s also light on lazy bumpkin stereotypes and the easy punchlines that come with them (a soft touch starts with Collette’s lilt of an accent and emanates out from there). For all of its wry moments of humor, the film doesn’t laugh at its characters so much as it delights in their newfound zeal. That even holds true during the small handful of goofy scenes that underline how satisfying it is for members of the syndicate to leapfrog up the social classes and compete against rich lords who own their horses outright. The folks of Cefn Fforest don’t “belong” at these fancy racetracks, but everyone with legitimate reason to hope for a better tomorrow is on similar enough footing.

To that end, “Dream Horse” is never better than when it watches Howard idly doodle a horse on his tax notes like a little kid, or soaks in the simple delight on Jan’s face as she lays eyes on her new foal for the first time and finds new purpose in an animal that she’ll come to see as something between a sports team and a child (the foal’s mother dies during childbirth, and Jan naturally does what what she can to fill those horseshoes). The syndicate votes to name the horse Dream Alliance because they all pitched in to buy it on a wing and a prayer, but Jan is more compelled by her personal bond with the young thoroughbred than she is by his ability to bring the town together.

In what has to be one of the most touching monologues ever delivered to a horse on camera — and there’s plenty of competition for that particular crown — Jan confesses to Dream Alliance that watching him race returns her to herself. That it liberates her from living in reference to other people as just someone else’s something. That it gives her permission to want things from her life again.

What those things are is never much detailed or dwelled upon, but it’s rare and refreshing to see an inspirational story that’s actually about people being inspired. There are a handful of big horse races (Dream Alliance turns out to be something of a natural) that lead to a crushing setback and then a triumphant return and all of that jazz, but Lyn reliably prizes his characters’ excitement over our own in a way that allows us to invest in the dream alliance itself, and not just the horse that bears its name.

Sweetness can’t excuse the film’s lack of depth, nor does it save the grand finale from the feeling of an anticlimax; as soon as Dream Alliance lends the syndicate a new sense of purpose, their investment has already paid off as much as it ever will. And yet “Dream Horse” is still a sure thing because of the bet it places on these people. “We can’t stop ourselves from dreaming of bigger things,” one character says. That could be a hopeless statement of resignation, but this movie — against all odds — runs it into a rallying cry.

Read the rest of the original article at Indiewire