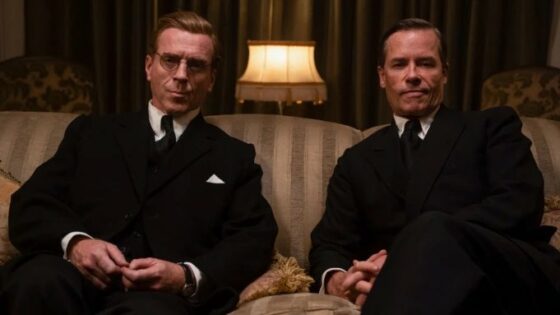 Variety can exclusively reveal the first look at Damian Lewis and Guy Pearce in “A Spy Among Friends,” a limited series for BritBox U.K. and Spectrum.

“A Spy Among Friends” is based on the New York Times best-selling book written by Ben Macintyre. It is produced in collaboration with Sony Pictures Television, ITV Studios and Veritas Entertainment Group. Lewis also serves as executive producer through his production company, Ginger Biscuit Entertainment. The series has begun production in London and will also shoot in Romania.

The show dramatizes the true story of Nicholas Elliott (Lewis) and Kim Philby (Pearce) — two spies and lifelong friends, one of whom was betraying the other all along, at the height of the Cold War.

It is directed by BAFTA winner Nick Murphy (“Save Me”) and is produced by BAFTA winner Chrissy Skinns (“Elizabeth is Missing”). Bob Bookman, Alan Gasmer and Peter Jaysen are executive producers for Veritas Entertainment Group.

The six-part series will debut exclusively on ITV and BBC-owned streamer BritBox in the U.K. and Spectrum’s on-demand platform in the U.S. in the fall of 2022.

Other cast members include Anna Maxwell Martin (“Motherland,” “Line of Duty”), Stephen Kunken (“Billions,” “The Handmaid’s Tale”) and Adrian Edmondson (“Back to Life,” “The Pact”).

Kevin Lygo, BritBox Originals creative chief and ITV director of TV, said: “‘A Spy Among Friends’ is a brand-defining original commission starring world class British talent. We are really looking forward to sharing it with our subscribers.”

Read the rest of the original article at Variety.
View more photos in our Gallery here