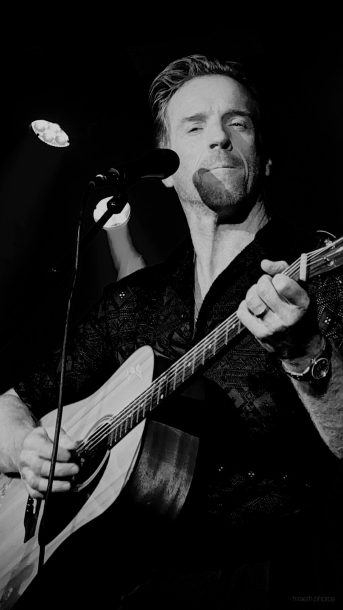 Not many aspiring musicians get to pack a fancy London club to the rafters with hooting fans at their very first gig, but Damian Lewis did arrive at Omeara with a head start in the fame stakes. The Homeland, Billions and Wolf Hall star had busked around London and France in the embryonic stages of his acting career, more recently giving a few low-key private performances for friends. But during lockdown he began writing songs in earnest in collaboration with the east London-based jazz-pop band Kansas Smitty’s. This was a preview of his debut album, set for release early next year.

The 51-year-old actor made his trad-leaning tastes plain with a respectful cover of Neil Young’s radiant midlife love ballad Harvest Moon, which wafted along on heart-twanging pedal steel guitar and woozy honky-tonk piano. He earned hipster connoisseur points with his husky-voiced solo piano rendition of Little Trip To Heaven (On The Wings Of Your Love), from the first Tom Waits album, Closing Time.

Only on a handful of numbers did Lewis seem to step outside self-conscious performance mode and stop coming across like an actor playing a musician. That said, he closed on a high with a superb folk-rock track that began as a gently tumbling waltz before building to a crashing, emotionally raw blast. This was the best song of the night, sounding like a lost Jeff Buckley classic in places. More of this passion and swagger could have really lifted this show.

Of course there is a long and ignoble history of actors changing lanes to try out their musical skills in public, only to be rightly laughed off stage. Lewis is no fool; he knows this all too well, which may explain why he peppered this set with self-effacing jokes and humble expressions of gratitude. In fairness, he did not disgrace himself.

On a scale of thespian tunesmiths, from the risibly awful Laurence Fox at the bottom to genius all-rounders like Janelle Monae at the top, he fell somewhere in the middle, slightly to the left of Hugh Laurie, just a few degrees from Kevin Bacon. Room for improvement, sure, but this was a perfectly respectable debut.

Damian Lewis plays at the Wilderness Festival, Oxfordshire, this weekend.