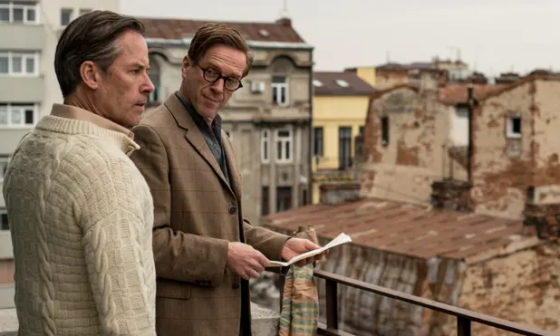 The King’s Speech star Guy Pearce appears as the defected officer, while Wolf Hall’s Damian plays Nicholas Elliott, his close friend of several years who for a long time, was none the wiser regarding his pal’s treachery.

Ahead of the launch of A Spy Among Friends, Metro.co.uk spoke to Damian and the show’s writer Alex Cary, with the pair having previously worked together on acclaimed American espionage drama Homeland.

Damian, 51, explained that there was one scene in particular that he shared with Guy, 55, which was a ‘grandstand moment’ between their characters – but in the end, it was decided it would be more effective for the exchange to be dropped.

‘There was a fabulous scene right at the end of the series, which is this big sort of grandstand moment between the two characters,’ said the actor, who’s also a producer on the series.

Making light of the omission of the scene, Damian quipped: ‘Guy and I both gave Bafta-worthy performances and it’s been cut in its entirety, which is very sad.’

He then continued: ‘Serious answer – this was a beautifully written scene by Alex, which was three or four pages long.

‘We realised we could tell much more articulately, the poignancy of the loss of friendship and the betrayal, actually with an unspoken moment, which was fleeting, and we didn’t need this three or four page scene which we’d you know, learnt and acted our little socks off. It was redundant. You have to take those hard decisions in the edit, and it is better without it.’

Alex, 59, exalted the ‘acting masterclass’ that Damian and Guy gave in the cut scene.

‘It was a testament to the visual power to the directing of the show, to be honest,’ the executive producer outlined.

‘That was a tough decision, because it was sort of an acting masterclass, and I was pretty proud of the writing. But it had already been done visually. That was also part of the design of the thing. We just sort of realised we’d told the same story twice.’

A Spy Among Friends will be streaming on ITVX from Thursday December 8.