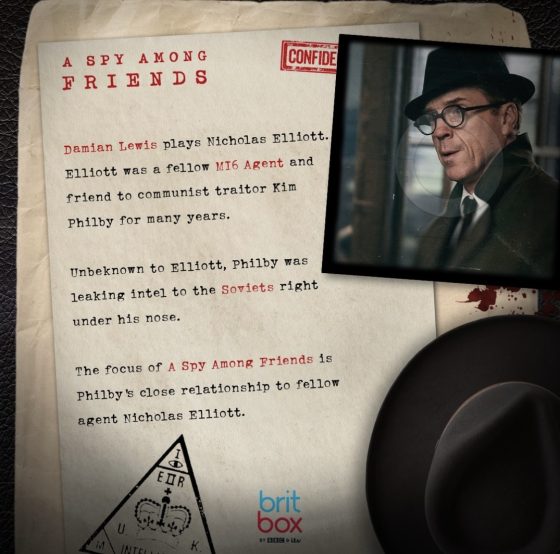 Much of the show’s early episodes revolves around three interrogations. The first takes place in Beirut, where Philby (Guy Pearce) was living when MI6 finally blew his cover as a mole. With the agency hoping to keep this information to itself, it allows Philby’s longtime colleague and confidant Nicholas Elliott (Damian Lewis) to go and confront him off the record. But this being the world of elite espionage, there’s always someone listening.

So when Philby manages to flee on a Russian boat days later, Elliott is brought in for questioning by (fictional) MI5 investigator Lily Thomas (Anna Maxwell Martin), who had eavesdropped on the Lebanese rendezvous. Suspecting that personal loyalties may have superseded professional duties, Lily begins to probe into every aspect of their friendship. At the same time, Philby finds himself in choppy waters with the Russians, who fear that this prime KGB asset may have been turned by an old comrade of a different kind.

Each of these conversations leads to flashback sequences that tease out the story of this kinship between two close yet closed-off men. But the elliptical exchanges are themselves the prevailing source of tension and intrigue here, as they leave it to us to assess what is revealed and what is unsaid, what is collusion and what may be a trap.

For all the intricate plotting and fertile ambiguity, the show doesn’t lose sight of the more basic, universal tale it tells about the pain of betrayal. Lewis lowers his character’s patrician façade to show glimpses of a spy’s wounded pride and a friend’s hurt. Pearce meanwhile balances Philby’s haughtiness at having duped his “sentimental, arrogant” colleagues, with snatches of affection and nostalgia.

Offsetting the plumminess of the two leads is Maxwell Martin’s flinty Geordie, who rails against the classist, self-preserving institution that failed to look beyond Philby’s public-school charm. Between the boys’ club mentality in the halls of power and the looming Russian threat, you could almost forget the period setting.

Read the rest of the original article at Financial Times