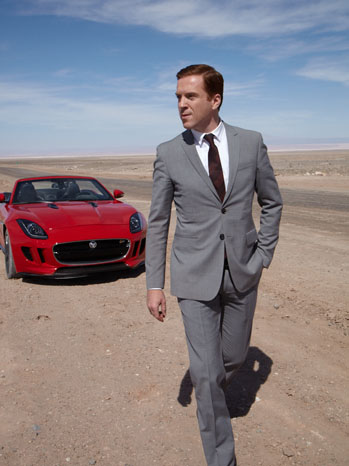 The Emmy winner tells THR about his Sundance London collaboration with the automaker and his decision to put a humorous spin on the Bond-esque hero: “There’s not a lot of comedy in Homeland.”

The kind of TV affection that Damian Lewis has earned since Homeland premiered tends to come with a high-profile endorsement deal — preferably for an automaker.

Many of the of Emmy and Golden Globe winner’s contemporaries are partnered with some of the big ones. Dexter star Michael C. Hall narrates Dodge ads, Mad Men‘s Jon Hamm is the voice of Mercedes-Benz and co-star John Slattery can frequently be seen behind the wheel of a Lincoln.

But Lewis strays from the pack in his elaborate production for Jaguar. He doesn’t provide a voice over, and you won’t see 30 second spots airing during ad breaks for SportsCenter. Lewis’ Jaguar commercial is a 12-minute movie produced by Ridley Scott’s advertising company.

Desire, being screened as a part Sundance London’s 2013 programming, premieres in its official venue, YouTube, on Wednesday.

“It sort of fell into my lap,” the London-born actor tells The Hollywood Reporter. “I’ve never done anything for the online market before, and I just thought it was cool to work with Ridley Scott and [director] Adam Smith. I thought the script had a kind of nod to the Americana that you find in the Coen brothers’ movies.”

END_OF_DOCUMENT_TOKEN_TO_BE_REPLACED

The Emmy winner tells THR about his Sundance London collaboration with the automaker and his decision to put a humorous spin on the Bond-esque hero: “There’s not a lot of comedy in ‘Homeland.'”

END_OF_DOCUMENT_TOKEN_TO_BE_REPLACED 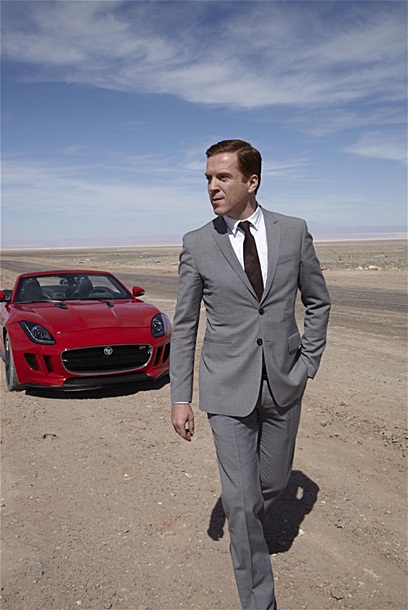 Damian Lewis was last in a desert almost a decade ago. The trip came in the wake of both his acting breakthrough in Band of Brothers, and the death of his mother in a car crash in India.

“The worst thing about that period, though, was losing my Band of Brothers penknife,” he says. This is something of a Lewis trait – making light of something heavy. “I took myself off on my own to Egypt and Jordan with a backpack. And I befriended a Bedouin in the Wadi Rum, who took me camping there. And we got caught in a sandstorm. He was a little fellow called Suleiman. I only realised after I’d left him the next day that he’d nabbed my Band of Brothers penknife. It was very frustrating.” Was this a special memento from the Second World War series, I ask, dedicated to their leading man and perhaps engraved by producers Steven Spielberg and Tom Hanks?

“No, it was just a really cool little Swiss Army knife. But yeah,” the Old Etonian continues, “I went off to the Middle East for a month, and I remember infuriating the locals in Luxor playing backgammon. They played it incredibly passionately and incredibly quickly in Egypt – it’s an extraordinary experience. You just heard the constant rattle of dice and chk-chk-chk of the counters. And I used to sit there, really slowly pondering my moves. And one afternoon I had this whole café gathered behind their fella – this wizened old guy with a beard – and they were all just shouting at me, cursing at me, for playing so slowly. Oh, it was great though,” he smiles wistfully. “I played a lot of very stoned backgammon there.”

We’re in a remote Chilean town situated in the highest, driest desert in the world, and Lewis – clad entirely in Burberry – is sitting in a blood-red sports car, impatiently honking at a children’s marching band as he tries to inch his way through them. Someone, or something, is on his tail.

Among the film crew bustling beside him is stunt co-ordinator Daniel Hirst, fresh from working with Tom Cruise on the sci-fi epic All You Need is Kill, and here to help Lewis with action sequences, including one where he smoothly disarms a gangster. Which, given that the character the 42 year-old is playing is supposed to be a well-spoken English chap who delivers luxury sports cars for a living, is not a skill we’d expect to be high on his CV.

I ask Hirst: was Lewis “fight-ready” after two seasons playing a battle-scarred former US marine in Homeland? “Yeah, he was very easy to teach,” the no-nonsense former British military officer shoots back. “When he went into the first move from the dialogue, even though I hadn’t had time to give him a brief, Damian had the step-to-one-side and control-the-weapon routine pretty straight up. So I think he’s probably done that before.”

In the popular show Homeland he takes on the role of an USMC Sergeant called Nicholas Brody.

But in his latest project Damian Lewis transforms into Sydney Clark, a delivery driver, who shares similar qualities to British spy James Bond.

Helping Jaguar unveil their new F-Type sports car, Lewis, 42, offered his acting skills to a short feature film called Desire which is set to give 007 a run for his money.

In the trailer for the 12 minute mini-movie, which was shot in South America, Damian cuts a dapper figure as he cracks on with his mission to deliver the candy red vehicle.

Despite being only one minute and 21 seconds long, the teaser proves to be explosive as Clark (Lewis) finds himself in various testing situations.

The short sequence begins with the words: ‘His job was simple, deliver a car, but in the desert, nothing is simple.’

Desire tells the story of delivery driver Clark (Lewis) who is taking the car to a wealthy client but runs into trouble after a chance encounter with a mysterious young woman in the middle of the desert.

Speaking about his chance to work with the luxury British car-maker Jaguar in the mini-movie, Damian admitted he was instantly ‘intrigued’.

Lewis said: ‘When Jaguar approached me about the F-TYPE Desire film I was really intrigued. I then got to read the script and decided it was definitely a project I wanted to be a part of.

‘Working with the director Adam Smith from Ridley Scott Associates, it promises to be an adventure.’

He added: ‘Jaguar cars have played some iconic roles in film for many years and I’m looking forward to being the first to drive the F-TYPE in film.’

END_OF_DOCUMENT_TOKEN_TO_BE_REPLACED

The 12-minute short film promoting the new Jaguar F-TYPE has been entitled Desire and takes place in the Chilean desert.

It tells the story of Clark (Lewis), who delivers cars for a living, running into trouble after a chance encounter with a mysterious, young woman (actress Shannyn Sossamon) in the middle of a lawless desert.

The film has been directed by Adam Smith and will be premiered free online in March.

Damian spoke about Desire at the US Debut event for new F-TYPE Jaguar in November last year.