Paul Giamatti and Damian Lewis as ‘The Odd Couple’? The ‘Billions’ costars have a laugh about that and more 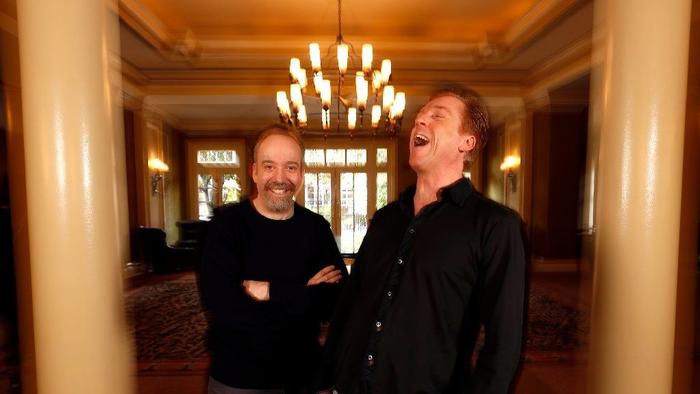 Paul Giamatti, left, and Damian Lewis star in the second season of Showtime’s, “Billions.” Giamatti and Lewis were photographed at the Langham Hotel in Pasadena on Jan. 8.  – Source: Genaro Molina / Los Angeles Times

Paul Giamatti and Damian Lewis are Serious Actors. They’ve played heroes and villains, presidents, soldiers and spies, and have been justly acclaimed for doing so. (Both have an Emmy to prove it: Lewis for “Homeland,” Giamatti for “John Adams.”)

But right now, in a hotel suite in Pasadena, the Serious Actors, who likely have stories to trade about appearing in “Hamlet,” are giggling. The lanky Brit and the bearded New Englander are a textbook example of getting on like a house on fire. Unfortunately, this camaraderie actually presents a problem for their work together on the Showtime drama “Billions,” in which they play tremendously powerful and spectacularly damaged men locked in combat.

Lewis is Bobby “Axe” Axelrod, a charismatic, brilliant and, naturally, ruthless hedge fund king. Giamatti is the dogged, brilliant and, naturally, ruthless U.S. Attorney Chuck Rhoades. In the first season, Rhoades pursued the crooked Axelrod, bending more than a few rules himself. In a second 12-episode season of tense tête-à-têtes, which kicked off Sunday, it appears that the tables have turned.

“We get on far too well,” says Lewis, seated next to Giamatti. “It’s a miracle the scenes work at all.”

Read the rest of the original article at the LA Times