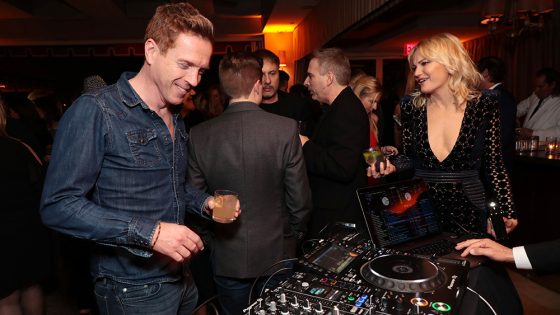 Damian Lewis and Malin Akerman hung around the DJ table at the Showtime Golden Globes Party at the Sunset Tower in Los Angeles, CA Saturday night. We know Damian loves to dance, sing, play piano and anything musically related, and if this photo is any indication, we just may see a DJ Damian in our future. Well, we can speculate.

According to The Hollywood Reporter, Showtime CEO David Nevins exclaimed, “Party your asses off!”  The cast of Billions did not need to be told twice. Asia Kate Dillon, wearing a Billions T-shirt, danced by the bar.  Damian and Malin Akerman carved out a little dance floor to get down to Cheryl Lynn’s “Got to Be Real.”

Showtime CEO David Nevins and Gary Levine, president of programming, were popular throughout the night, and rightfully so, as they celebrated their Golden Globe nominees including William H. Macy, Kyle MacLachlan, Frankie Shaw, and Liev Schreiber. Nevins gave a birthday toast to Julie Chen, who was on hand with husband CBS Corp. CEO Leslie Moonves, who were making the rounds before heading out to a birthday dinner. Also on the scene were the cast of “Billions,” including stars Damian Lewis, Paul Giamatti and Malin Akerman, as well as Stephen Colbert, Lena Waithe, Paula Malcomson, and Jason Mitchell.