Preview of the First Five Episodes of Season Three 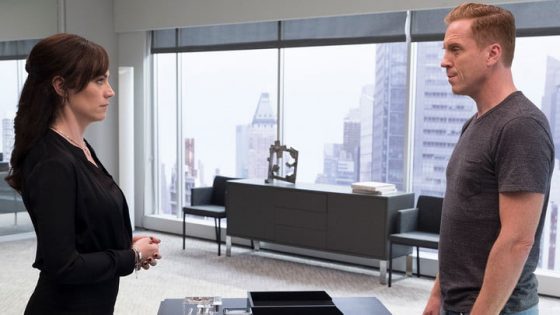 On The Lox’s 1998 song Money, Power, & Respect, Lil’ Kim rapped that those three words are what you need in life. It’s now 20 years later, and the third season of Showtime’s hit drama Billions shows why that can be the worst advice.

Over the course of Billions‘ first two seasons, Charles “Chuck” Rhoades Jr (Paul Giamatti), the U.S. Attorney for the Southern District of New York, has been on a mission to put billionaire Robert “Bobby” Axelrod (Damian Lewis), the hedge fund manager of Axe Capital, behind bars for the nefarious ways Axelrod built his fortune. It’s not easy for Chuck to pin down a man who is every bit his intellectual equal, and up to now the show has largely revolved around a cat-and-mouse game, with Rhoades and Axelrod alternating between the hunted and the hunter. By the end of the second season, Axelrod is finally arrested, thanks to a legally questionable ploy Chuck uses that involves betraying the people he loves.

We were able to preview the first five episodes of season 3 ahead of the season premiere on March 25. The new season picks up following the events of the season 2 finale, which exploded the Billions status quo and left characters trying to reassemble their lives amid the wreckage. No matter how Billions plays out, though, the show centers around the entertaining dynamic of its two lead actors.

As Chuck has been enforcing the law for the past two seasons, while Axelrod has been circumventing it, Chuck’s moral indiscretions have been depicted as being done in the best interest of the law. In season 3, he’s attacked by everyone close to him that he used to get Axelrod arrested, and we get to see the megalomaniac that’s been hiding under those expensive suits in full form. This new season will test the audience’s support of Chuck, and could lead them to view him in the same light as his adversary.

Chuck’s journey toward the dark side doesn’t mean Axelrod has finally seen the light, of course. The brilliant hedge fund manager has to relinquish something he compares to breathing in the new season, and while his world may be shattering, his impregnable arrogance is intact. He thinks his legal troubles are more challenging than what Kennedy faced during the Cuban Missile Crisis, and he says that with a straight face. We also get a rare look into one of his biggest fears, and it terrifies him so much he physically walks away from the thought.

In season 3, Rhoades and Axelrod’s relationship exists on a proverbial seesaw, separate but always with the other in sight. Chuck’s wife, Wendy, acts as the fulcrum, to the detriment of her own sanity. It is through her that we find out in one of the first five episodes of the new season that Axelrod and Chuck used to each be reverential of the other’s intelligence, while revealing parallels between Chuck and Axe that were not extensively explored in previous seasons.

Children of the damned

Both Chuck and Axelrod are fathers of preteen children we only ever hear about or see when both men’s indomitable personalities need to be stripped to its core, and the unintended consequences of their power struggle needs to be manifested. Season 3 proves the two men have other “children” who have been hiding in plain sight — their employees.

The people who take the advice of these two titans as fact, and their praise as life-affirming, are more impressionable than any actual child on Billions.

Throughout the first five episodes we watch both FBI agent Oliver Dake (Christopher Denham) and Axe Capital human computer Taylor Mason (Asia Kate Dillon) slowly, and begrudgingly, adopt qualities of their predecessors they have openly derided. Dake, who is introduced into the Billions world as the consummate professional who can’t stand even a whiff of impropriety, has to bend the law. Taylor struggles with profiting off of a death that affects them personally, whereas Axelrod literally built his empire from the attacks of September 11.

With Axelrod out of the office and Chuck off the case, those domineering shadows that once loomed over everything that happened on Billions are significantly reduced in the first five episodes, allowing dimmer stars to shine.

Instead of Axe Capital employee Mafee (Dan Soder) only appearing on-screen to be the bumbling idiot of the office who provides comic relief, he gets his own subplot where we find out how someone so ostensibly goofy could keep a job with a demanding boss like Axe. We also get a more humanized look into Taylor’s life now that they effectively are running things.

The Billions world also expands in season 3 with a new character who quickly becomes the bane of Chuck’s existence, right next to Axelrod. The Shawshank Redemption’s Clancy Brown plays new Attorney General Waylon “Jock” Jeffcoat, and he delivers some of the most stern moments in the early going of the new season. Jock is a staunch traditionalist who gets his news from Breitbart and yearns for the days when people had to walk outside to use the bathroom. Brown was a great casting choice to play Jock, and he holds his own with Giamatti in every scene the two share. His instant appeal is also a testament to the show’s brilliant writing.

On the write path

Giamatti and Lewis are the driving forces of Billions, but the series’ writing team give Billions its identity. For season 3, the words that give life to these characters are as vital as ever to the show’s continued excellence.

Profound questions of character dynamics are baked inside stories of Middle Eastern food customs shared over a dinner table. Heartfelt father-and-son moments don’t happen over playing catch and reminiscing about the good times. That sort of love is reserved for perjury and brothels. The disintegration of one such relationship is presented by re-creating the most iconic kiss from The Godfather Part II, with the same ominous tone of finality as the classic film. Pop culture references such as these are hallmarks of the show’s first two seasons, but at times are almost unwatchable in season 3.

Read the rest of the original article at Digital Trends