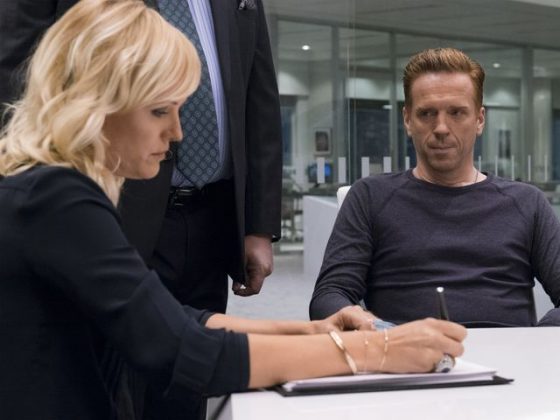 In a time ripe with women empowerment movements, strong female characters are perhaps more engaging than ever. Akerman stars as one such complex and powerful woman in the hit drama Billions. Set in the world of New York high finance, the show revolves around power politics as U.S. attorney Chuck Rhoades (Paul Giamatti) and ambitious hedge-fund king Bobby “Axe” Axelrod (Damian Lewis) use their wits and influence to outmaneuver each other. Akerman portrays Lara, Axe’s spouse who is anything but a trophy wife and acts as an equal partner in their relationship. Lara rose from humble beginnings to become a billionaire’s wife, and she isn’t afraid to do whatever she needs to do in order to protect her family or get what she wants.

TV DRAMA: What is it like to act with Damian?
AKERMAN: Oh, I love him! He’s a charming Brit; very intelligent. We have so much fun together! He’s a talented actor. I look up to him and his body of work, and he brings so many different nuances that you just have to be present with him and react to whatever he is giving. I’ve learned so much by working with him. I’m so happy that we get along so well because we play husband and wife. He’s a lovely, lovely human being—thank God.

TV DRAMA: How did you become part of Billions?
AKERMAN: I was actively searching for something that was not comedy. I found myself watching Breaking Bad and House of Cards and I thought, Wow, these are the shows I’m drawn to, wouldn’t it be nice to be a part of one of them? My agent sent me the script for Billions. I loved it. It had amazing, strong female characters. So I had a Skype meeting over Christmas break with [series co-creators] Brian [Koppelman] and David [Levien]. They said, We love you, but we don’t know your work outside of comedy—audition! I did that and then long story short I got the job; it was great. It was nice to find a script that was so well written and compelling for women.

TV DRAMA: What appealed to you about Lara?
AKERMAN: In the pilot, she has this great moment with one of the women who lost her husband on 9/11 and it ends with Lara threatening her. That really took me for a spin and I thought, Wow, this is quite a character. She’s tough and collected and smart. Truly, just that speech she had brought me in. I had many more questions as to how she became who she is and where she was going, but I just love that she’s strong and unafraid. I could see after speaking to Brian and David that she is an equal partner to her husband, Axe. They have mutual respect, which is so important. I wanted to make sure she wasn’t going to be a trophy wife; that this really was a partnership, otherwise it isn’t as interesting to play her. [I wanted to] be on television as a strong character.

TV DRAMA: How did you prepare to step into the role of Lara?
AKERMAN: The main thing was to figure out where she departs from. At the core, it’s all about family, so when she lashes out, it’s because someone has offended her family. She’s so protective of them, and she also represents the nurturer as the mother. She has gone from humble beginnings to navigating this high-society world. I was trying to draw parallels to my own life and see if I could bring something to it. There were similarities in our upbringings. I grew up from humble beginnings and then came into the world of Hollywood and had to navigate that whole new system. But Lara definitely is a survivor, and she’s not going to let anyone walk all over her. It’s a big learning curve, being able to adapt to new worlds. How do you go from humble beginnings into this world? What makes her different from all the other women who were there, who’ve been handed the money, who have grown up as trust-fund kids? She has an edge, and that came from understanding the need to be somehow grounded and not lose her past.

TV DRAMA: I find the partnership between Axe and Lara particularly compelling—that a guy like him wouldn’t have a trophy wife and that he would seek her advice and consider her a partner.
AKERMAN: And they ground each other. It’s interesting because in the second season there is a scene where they are in the closet and he is going back and forth about whether or not to pull his investment from a town and its casino, and I love that she comes in and says, Fuck ’em, go do it, and this is how we’re going to cover it.

That’s the moment we go, Of course, that’s why they are together. She comes out as the good guy all the time, and she feels like she’s the sensible one and grounded one and she puts family first, but in that moment, you realize this is why they are meant for each other; they have this part of them that is all about winning. That’s why they go well together. It’s an interesting partnership because when he goes weak, she goes strong; when he’s stronger, she’s weaker. They have this balance and this dance that really works for them.