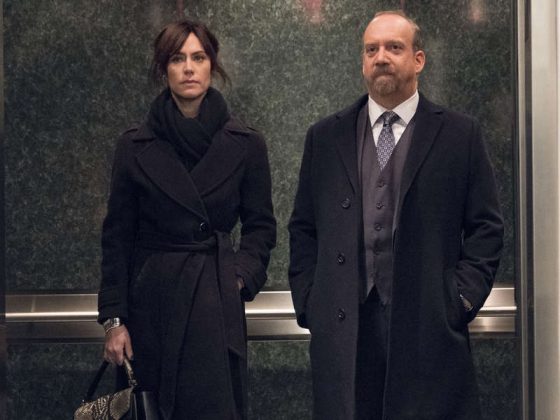 Last week, Billions was renewed by Showtime for a fourth season. The show’s a big ratings hit, and this third season has lived up to the billing with even more food porn, cheeky pop culture references, unsettling, Oedipal kissing between Emmy-nominated actors, and, of course, epic feuding between Axe and Chuck. The conflict at the center of this show has changed quite a bit since its premiere: By the halfway mark of the first season, the feud between Axe and Chuck was no longer direct; Chuck had to recuse himself from the investigation, and since then the main characters have mostly lobbed threats at each other through back channels. Once in a while, Damian Lewis and Paul Giamatti find themselves in the same room and shout at one another (it’s great). But no matter how the feud has been carried out—in person or by proxy—Billions has been dynamic, scathing, and preposterously entertaining—like Littlefinger and Varys duking it out in King’s Landing, except atop a skyscraper in FiDi.

But what would happen if Chuck and Axe were thrown on the same team, by virtue of having no other options? This week’s episode, “The Third Ortolan,” sets up this enticing possibility, but not before a preposterous dining ritual, a bunch of George Clinton quotes in court, and more despicable antics from Spyros. Let’s go through the superlatives.

After last week’s (admittedly unexpected) hookup, Taylor and “venture philanthropist” Oscar Langstraat (Mike Birbiglia) seem to be going strong. Oscar sends flowers to Taylor, which itself is a normal and non-nerdy thing to do. Unfortunately, the flowers were clustered according to the Fibonacci sequence. 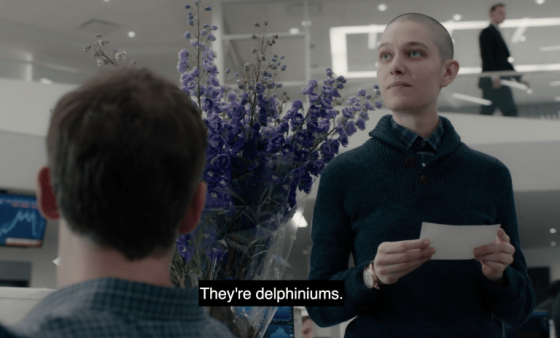 If Ben Kim is geeking out about the flowers’ significance, you know it’s a nerdy gift. 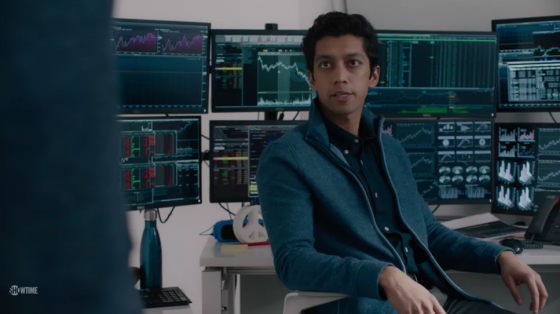 Holy crap. This is one of the “quants” that Taylor hired to work on the company’s algorithm, and he looks absolutely incredible. The popped collar is a flex, and if you told me this was a deleted scene from the Matrix reboot, I’d believe it in a heartbeat.

In his latest bid to permanently put Axe behind bars, Chuck gets his hands on the bacteria that Axe used to contaminate some Ice Juice last season (turns out, Dr. Gilbert was no good doctor). The goal now is to plant that bacteria somewhere that’d make Axe liable. Naturally, Chuck decides his best course of action is to pay a Congolese spy (??) $100,000 to infiltrate Axe’s ridiculously lavish New York City penthouse.

Even for a guy who spent $27 million of his blind trust to freak the fuck out of Axe, this plan is a bit ridiculous—because Axe is that paranoid, and his penthouse is practically a fortress guarded by at least one avocado toast connoisseur.

Something I noticed immediately about Chuck when I first began Billions is his affinity for food—judging people’s food choices, and luxuriating in his own meals when the opportunity presents itself. Sometimes, he lets out pleasurable moans after a particularly delectable bite. (I like to think these moans aren’t written into the script and Giamatti is just really enjoying the food).

Anyway, this week Chuck meets with Black Jack Foley over pig’s ears, and after talking about how he feels a little bad about eating pigs, he rips apart the fried ears, takes a bite, and gives a brief moan of satisfaction. It’s a performance of the highest quality.

Connerty is about to present Axe’s case to Judge DeGiulio, and is understandably nervous because they haven’t leveraged enough evidence to give Axe any trouble. “Not even Evel Knievel could jump the gap between what I know and what I can prove,” he tells Oliver Dake, to which Dake responds, “I suggest you do what Mr. Knievel always did: Rev her high, pray for mercy, try to put her down on the ramp, and hope you are one of the elect.”

It’s not last season’s “I’M LIKE A GODDAMN OCTOPUS!” rant, but this was the most satisfying Dakian moment of Season 3. I miss the old Dake, the one who wasn’t subdued by Chuck and threatened everyone while definitely never skipping Sunday mass.

DeGiulio presides over Axe’s case, and just so it’s clear he’s not playing favorites, he shades the entire courtroom. (Note: This isn’t a complaint, it was thrilling.)

Then when Axe gets a little too cocky, he gets what I’m calling “DeGiulio’d” 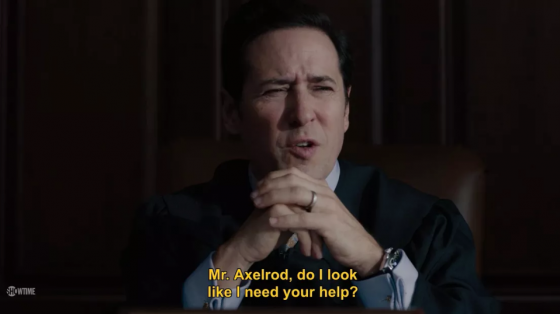 Somehow, that wasn’t even the best part. The best part was when DeGiulio quoted George Clinton—again, this is a judge!!—with “Free your mind and your ass will follow,” putting a legal spin on the funkadelic singers’ vibes.

This award can be handed down to Spyros in every episode he appears in, but “The Third Ortolan” was an all-timer for him, even by his slimy standards. First off, look at the way this bastard poses while sipping a cortado. 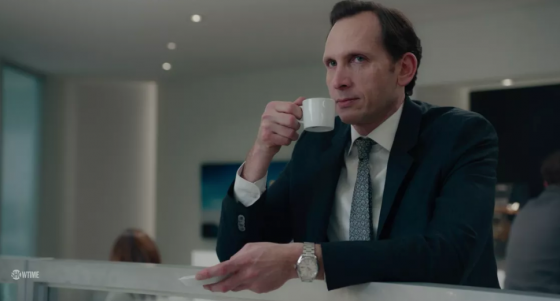 Later in the episode, when Chuck approaches him on his run about conspiring against Axe, he comments that he’s “just about at my lactate threshold” and that it “really clears the mind, optimizes my performance at the office.” Instead of refusing Chuck’s offer like a normal person, Spyros responds with, “I’m not some cuckoo bird, Chuck. I’m a golden eagle [makes very bad eagle squawk impression].”

Then, when Chuck threatens to bring Spyros’s old rape case to the fore, things get a bit too real. “Say it loud enough,” he tells Chuck, “they might even make me president.”

The cherry on the Spyros’s shit sundae is the fact that he rats out Wendy to Connerty for shorting Ice Juice right before the company’s stock tanks. And even worse, he does this by, quote, going “full Le Carre.” 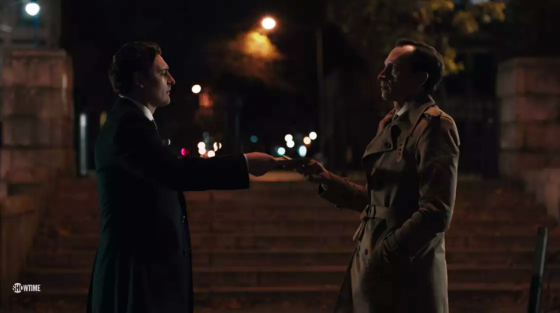 I have seen many John Le Carre adaptations, and I can assure you that no spy has dressed up like they need to be 50 feet away from elementary schools at all times.

Spyros tells Axe about his plan against Wendy before revealing he already went through with it. Given Axe’s loyalty to Wendy, this response—after Spyros made an awful 4×100 relay metaphor about passing batons—was perfection:

Naturally, when Chuck approaches Connerty in the street about taking the heat off him, he can’t help but lead with an incredulous, extremely judgmental “Poke?” comment about Connerty’s choice of lunch.

I don’t disagree, Chuck—he could have at least gotten sushi—but aren’t you trying to kiss up to him right now? Maybe lay off the poke slander.

Have you ever eaten ortolan? The bird that gives this episode its name comes from a controversial French dish, for which a tiny songbird is captured, tortured, force fed until it’s up to four times its original size, and drowned in Armagnac brandy. It’s about as as shocking as the way people are supposed to eat the meal: 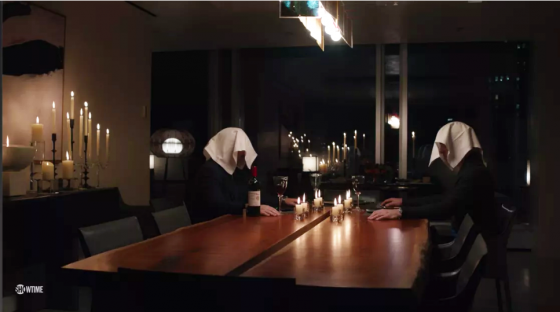 The napkin is, according to the French, a way to shield yourself from God while you feast on the decadent meal, but it looks more like a twisted pagan ritual. You’re supposed to eat only one serving; two would just be too gluttonous. Of course, Wags wants to know if it’s OK to have thirds.

Billions, expect a subtweet from PETA.