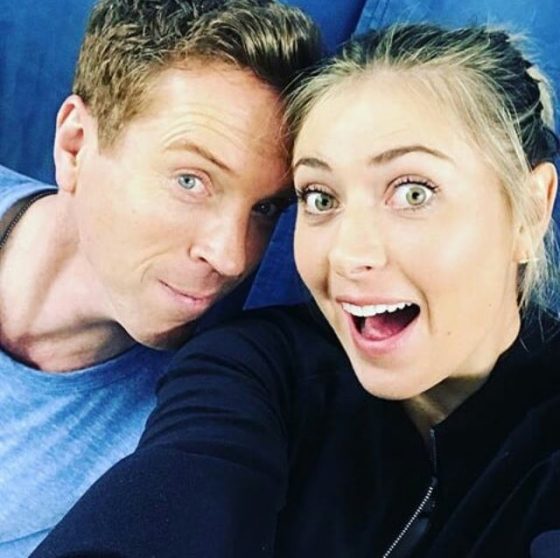 Here is the best, worst, and most from the 10th episode of Season 3

Three seasons into Billions, it’s clear that Axe and Chuck constantly need to sate their inflated egos by challenging someone and, ultimately, brutally crushing them (sorry, Connerty!). But even these accomplished dick swingers seem to be approaching obstacles that may be too high to hurdle, with Chuck hoping to topple Attorney General Jock Jeffcoat and Axe agreeing to invest billions of dollars for an intimidating Russian oligarch. 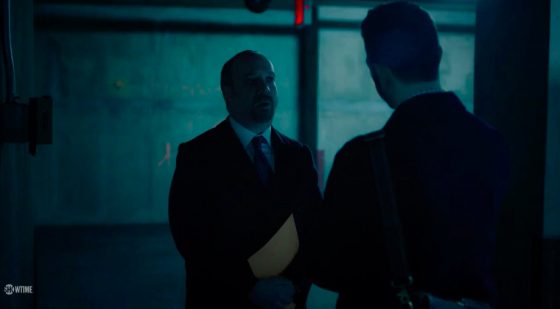 We saw this creepy parking garage when Chuck met with Oliver Dake in this season’s fourth episode. Chuck really needs to workshop his secret meeting spots with people—walking through a parking garage with a manila folder (!!) just screams, “I’m doing something potentially incriminating right now and really hope I don’t get caught!”

(What he is doing, by the way, is simultaneously helping “Buffalo” Bob Sweeney win the Buffalo mayoral race by indicting his opponent, and asking the reporter he met up with for some dirt on Jeffcoat. Progress!)

Wait, what’s the “Texas style” equivalent of a moat and drawbridge—a 12-gauge shotgun and a six-pack of Budweiser?

Oh don’t mind Axe, he’s just blowing off some steam with a game of tennis and—WAIT IS THAT MARIA SHARAPOVA?!

Should’ve known from the signature grunting! (No, but seriously, she’s still grunting here.)

The weirdest part of this scene might be seeing Axe hold his own in a rally—and if you think Sharapova was going easy on him, she admits she could never do that because he’s “way too smart to believe [he could beat her] anyway.” Get you a billionaire hedge fund manager that can also rally with a former world no. 1!

Most Intimidating Quote From a Children’s Participation Dance 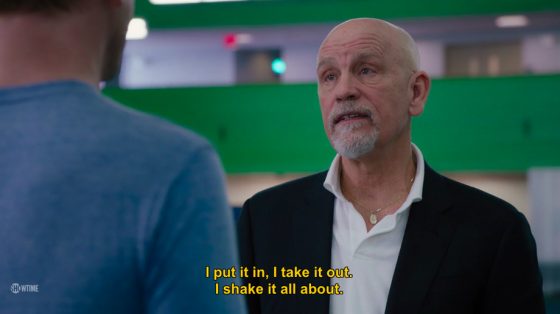 Note: Everything sounds more terrifying with a Russian accent, even the goddamn hokey pokey! [cries] That’s what it’s all about.

Fact: Spyros cannot enter a room without throwing out a cringe-inducing pop culture reference. He busts into Axe’s office to let him know Grigor Andolov—a.k.a., Russian John Malkovich—has pulled nearly half of his capital from Axe Cap, and that they are now at “DEFCON 6.”

Two problems. One, Axe is already aware that Grigor pulled some of his capital. Second, there are only five DEFCONs, and DEFCON 1 is the most severe, so “DEFCON 6” doesn’t even make sense.

Don’t let the door hit you on the way out, Spyros!

Jock Jeffcoat invites himself and his wife over to Chuck’s house for dinner, and Wendy asks what his wife’s name is, leading to this:

Holy shit. I love it when Billions refuses to demonstrate a modicum of subtlety, which is all of the time.

Ben Kim had a good episode last week: He finally stood up for himself when Dollar Bill was being vaguely racist. Good for Ben Kim! Unfortunately, as he confides to Wendy in “Redemption,” the moment has made him, quote, “more timid, somehow.”

Case in point: He thinks he has a good play to get Axe some quick money, and first suggests it to Mafee at the urinal. This piques the interest of Wags, as well as Taylor, who is also in the bathroom. But being surrounded by all his superiors gives Ben “pee fright,” so the dude stops peeing and fails to pitch his idea coherently. To be fair, I don’t know if I’d be able to pee and pitch an idea worth millions of dollars when three people are simultaneously glaring at me.

Wendy suggests that Ben should do something wild that his introverted self would never consider doing to break out of his perceived funk—keep that in mind as we move along.

Surprise! Axe is one hour late to his own kid’s birthday party after taking a meeting to raise more cash after Grigor pulled out a big chunk of his money. (In Axe’s defense, Gordo was playing FIFA, a perfect video game, so he was having a great time without him.)

Best of all, however, was Axe treating his buddy Raul Gomez, head of the police pension fund, to some Ivan Ramen prepared by Ivan Orkin himself. 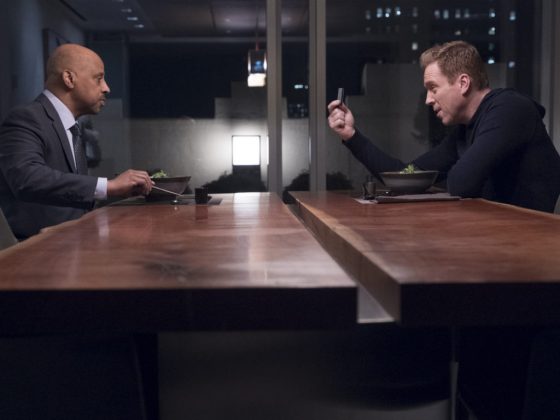 Honestly, I’d be so easy to coerce—if Axe bought me a five-piece meal from Popeyes with extra biscuits I’d let him do whatever the hell he wants with my money.

The Chuck Pat—recently tainted by the morally reprehensible choices of one Chuck Rhoades, and performed with eloquence by the great American actor Paul Giamatti—is back, baby! The FBI tracks down someone for Chuck who might know how Jock Jeffcoat and his brother gained considerable wealth in Texas through nefarious means. Good job, FBI guy: Here is a Chuck Pat.

The agent’s soul was nourished; his skin cleared by the firm, yet gentle grasp of a wise sage. The Chuck Pat and its remedial properties are mercifully restored.

Moment of the Season

All you need to know is that Ben Kim is heeding Wendy’s advice to do something gutsy, and the music he blasts from his phone is Nelly’s hit classic, “Hot in Herre.” Enjoy.

The good news: Ben Kim got his mojo back and finally got to pitch his idea, which is solid! The bad news: The people he was grinding on in the elevator were going to give Axe Cap money, and no longer will, probably because they didn’t enjoy the strip tease. Still chalking this up as a win for Ben Kim!