Damian Lewis is Exceptional as Ford 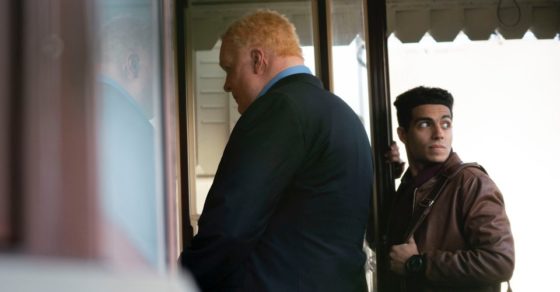 In May of 2013, a video surfaced that appeared to show Toronto’s former mayor, Rob Ford, smoking crack. It was hardly the first time his name had come up in relation to controversy, but it was the rock big enough to cause a ripple effect throughout his administration. But, rather than focusing on Ford’s bombastic personality and fall from grace, writer-director Ricky Tollman’s debut feature centers on those in smaller positions working in a variety of industries around him. Whether they’re eager to break this monumental story or to try and keep it contained, the effort exuded by each party far outweighs Ford’s cataclysmic nature, even if his presence looms heavily over the narrative. Run This Town falls short of its storytelling aspirations but finds success in Ben Platt and Mena Massoud, who lead with lively, enthralling energy.

Run This Town‘s narrative is mainly focused on Kamal (Massoud), a political aide to Ford, and Bram (Platt), a recently-graduated journalism major with a hunger to break his first big story. The two live entirely different lives, but share one common goal of climbing the respective ladders at their institutions. When the video of Ford becomes known to Bram, he jumps at the opportunity to use this as his ticket to leave his current position as a listicle writer. Kamal, on the other hand, is struggling to contain the story while still maintaining his legitimacy in his field. In the end, the true focus of Tollman’s story is how tirelessly these two characters worked to prove themselves, which Massoud and Platt play up in equally electric performances.

What helps bring these wonderful performances to life is Tollman’s snappy script, which is reminiscent of Aaron Sorkin’s fast-paced and exceptionally witty style. However, his feature doesn’t quite hit its stride with these two characters until its final act. The first half of the film introduces the viewer to a number of different characters, some of which are memorable and others that should’ve been left on the cutting room floor. When it comes to the former, Damian Lewis and Jennifer Ehle are exceptional as the disgraced Ford and Bram’s clever editor Judith, respectively (especially Lewis, even if the fat suit he’s wearing is less-than-convincing). But the true standout of the supporting cast is Nina Dobrev as Ashley, an assistant to Ford, whose captivating performance deserved far more time on screen than was given. Her interactions with Kamal are incredibly fun to watch play out, and it would have been great to see more of that.

The entire cast blends incredibly well together to make for a strong foundation in Tollman’s feature, but choppy editing – combined with uneven storytelling – is where Run This Town meets its unfortunate downfall. There are plenty of times when the film’s editing is all over the place, with design trumping over cohesiveness. Occasionally, this even makes the film a little difficult to watch. Despite this, Run This Town still finds a way to remain thrilling and keep the audience invested, mainly through its superb casting. It takes a while to reach this point, as the movie’s first act sets some ambitious standards that it can’t quite reach, but when it hits its mark, it hits it hard.

Eventually, Run This Town finds its stride, but the length in which it takes to get there is the greatest fault in Tollman’s film. There’s no doubt that he’s passionate about filmmaking and politics, as that charisma and fervor radiate through each scene and within his Sorkin-esque script, but the uneven pacing and high standards for this story set the bar a little too high for what the end result winded up being. Thankfully, both Platt and Massoud shine in their respective roles.