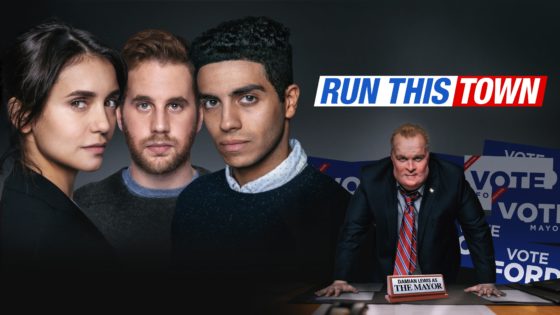 Run This Town is set to air on the cable television network Showtime on Saturday, August 22, 2020 at 8:00 p.m. Central Standard time. Be sure to check your local listings and set your DVRs!

Fact or Fiction? A Comparison. 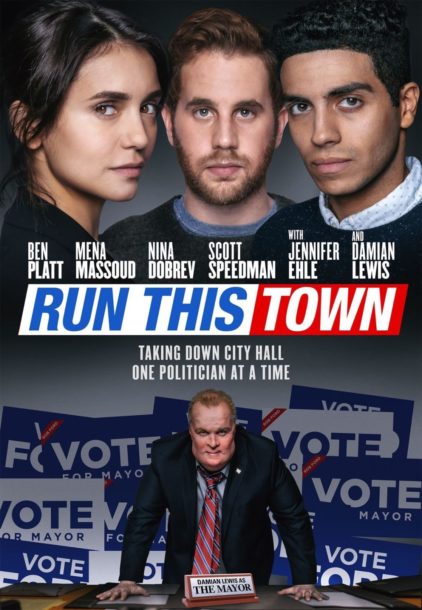 It’s been 10 years since Rob Ford rode his gravy train all the way into the mayor’s office. From the start, his reign was mired in scandals and stupors, but things reached international-talk-show-punchline levels with rumours of a video that showed him smoking crack. This regrettable slice of city lore is the basis of Run This Town, a new movie out Friday starring Damian Lewis (Homeland) as Ford, and co-starring Nina Dobrev and Mena Massoud. The drama centres around the hunt for the elusive video, and for those of us who lived through Crackgate, the story will feel familiar…sort of. Real-life events are the inspiration, but like a certain erstwhile mayor, writer and director Ricky Tollman has taken more than a few liberties with the truth. Here’s our (very spoilery) analysis of truths and post-truths in the film.

The protagonist
Real life: The most significant deviation from actual events is the movie’s gender-swapped protagonist. In March 2013, Toronto Star reporter Robyn Doolittle received an anonymous call from a source with access to the crack-smoking Ford video. She viewed the footage in an Etobicoke parking lot a month later.

Run This Town: In the movie, the hungry young reporter chasing the crack video is 20-something journalism grad Bram Shriver (Ben Platt). Doolittle tweeted about the surprising gender swap when the movie was first announced: “I’m glad they’re rewriting the fact that it was a female reporter who investigated Rob Ford. Why have a woman be a lead character when a man could do it? Ammaright?” In response, Tollman said that his movie tells a different story: one that uses the Ford crack scandal to explore millennial entitlement and male privilege. It was, per Tollman, inspired by his own brother’s post–journalism school experience.

The paper
Real life: The Star was the paper at the centre of the Crackgate scandal, though the video was ultimately scooped by Gawker, which published a written account of the video in May 2013.

Run This Town: Bram works at a fictional paper called the Record, reporting to an extremely cranky mid-level editor named David (Scott Speedman). In the film, the Star and the Globe also exist. When the story finally comes out, it’s on an unnamed website—a stand-in for Gawker. It’s unclear what purpose the Record serves as a plot device, since Bram could have just as easily worked at one of the real papers. Maybe because it’s because most real newsroom editors don’t look like Scott Speedman.

The mayor
Real life: Ford was famously scruffy and unkempt—it was part of his Average Joe persona, but also down to his penchant for after-hours (and during-hours) debauchery. And while he grew up posh in Etobicoke, his accent was curiously blue-collar Ontario.

Run This Town: Hunky Brit Damian Lewis is totally unrecognizable in a fat suit and extensive prosthetics. The result captures Ford’s signature dishevelment. Playing the mayor in party-mode is where Lewis does his best work. A scene where he hosts an after-party at his office will probably feel familiar to anyone who worked at City Hall during the Ford administration. As for the accent, Lewis worked with a voice coach to pull off a convincing hoser-lite, but at times it sounds more East Coast than outskirts of Toronto.

END_OF_DOCUMENT_TOKEN_TO_BE_REPLACED 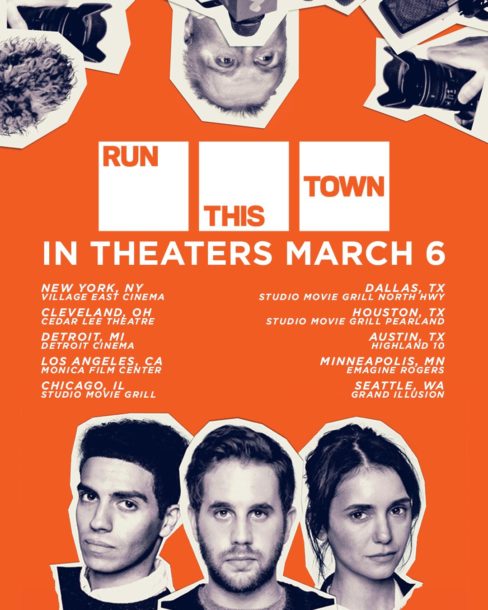 Damian’s new film Run This Town opens in select theaters across the US on Friday, March 6, 2020, in the following states: New York, Ohio, Michigan, California, Illinois, Texas, Minneapolis, and Washington. You can also view the movie digitally on iTunes for $12.99, Video OnDemand (VOD), and other usual digital suspects. If you search for it on an array of digital or VOD providers you normally use, even your local cable provider with VOD access, you’ll likely find it! For example, Contour with Cox Communications and Spectrum. All you lucky Canadians can see the film at your local movie theatre, so be sure to check showtimes!

Or as Director Ricky Tollman told us,

“BUT if people can catch it in the theater, where the sound is loud, the popcorn’s warm, and the room is dark, they’re in for a treat. Especially because the score by @AdrianYounge and @AliShaheed is THUMPING.”

Smart, ambitious and impressive, “Run This Town” is the best kind of feature directing debut, a film that entertains and makes you look forward to what will come next.

Written and directed by Ricky Tollman and inspired by a real-life scandal that enveloped Toronto’s then-Mayor Rob Ford half a dozen years ago, “Run This Town” does several things well.

It delivers a savvy portrait of millennials — eager to get ahead in a world they never made while coping with multiple pressures — by presenting two individuals who end up working two sides of the same situation.

Mena Massoud (“Aladdin”) plays Kamal Arafa, a special assistant to Ford, who is — truly — a larger-than-life mayor (that’s Damian Lewis under a ton of makeup).

Kamal’s job is spinning Ford’s periodic bad behavior, and when he hears about a tape that shows the mayor smoking crack, he swings into action.

Bram Shriver (Ben Platt, Tony winner for “Dear Evan Hansen”) is an aspiring journalist stuck doing “best of” lists. Eager to prove himself to his acerbic bosses (Jennifer Ehle and Scott Speedman, both excellent), he too gets wind of the tape and goes after it.

Intent on telling these individual stories (as well as that of another Ford assistant played by Nina Dobrev), “Run This Town” also finds time for generational commentary and an examination of how both politics and journalism operate.

Read the rest of the original article at Los Angeles Times

What Happens When the Mayor Smokes Crack? 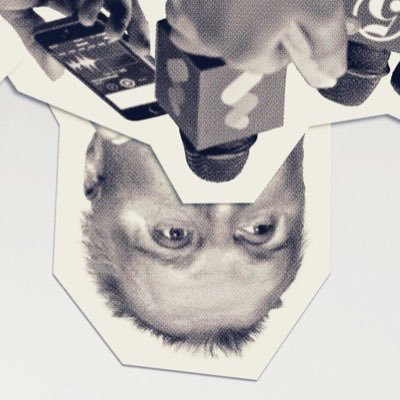 “Run This Town,” a jagged, snappy procedural that splits its time between a downsizing newspaper and a dysfunctional city government, is a fictionalized account of an actual scandal. In 2013, The Toronto Star and Gawker both said their reporters had watched a video that appeared to show Toronto’s mayor, Rob Ford, smoking crack. Six months later, he admitted to having used the drug, but did not resign.

Bram (Ben Platt), a young journalist who writes listicles for a Toronto news outlet, is clearly out of his depth when he meets a potential source who wants to sell him the video. The movie, which ends with Bram delivering a self-righteous, mostly unmotivated defense of his generation’s work ethic, takes a weirdly sympathetic attitude toward his stumbles.

The film is much sharper at city hall, where the two other major characters work. Kamal (Mena Massoud), the special assistant to the mayor, gleefully demonstrates his reporter-stonewalling strategies to Ashley (Nina Dobrev), a new press aide. She eagerly runs interference for the mayor until he shows up at work drunk and grabs her lewdly. Damian Lewis plays Ford, whose name is not changed, in a surprisingly effective feat of prosthetics.

Making energetic use of split screens, the writer-director Ricky Tollman shows a gift for staccato cutting and clipped dialogue, as in a spirited discussion of terminology at city hall. 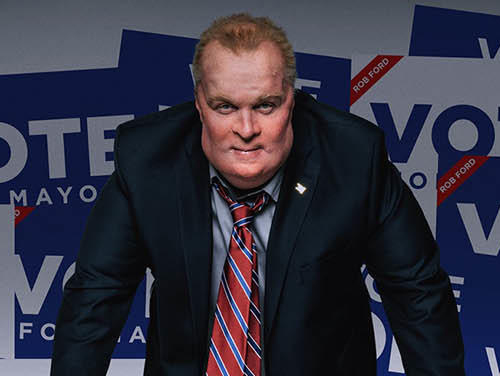 END_OF_DOCUMENT_TOKEN_TO_BE_REPLACED

“Damian Did Such a Great Job”

In case you missed it, Nina Dobrev and Mena Massoud were answering questions live today about Run This Town, which is out in select theaters this Friday, March 6, and well as Video On Demand same day.  About 25 minutes into this video, Nina talks about the scene she filmed with Damian in Run This Town.

ICYMI we were LIVE with the stars of #RunThisTownMovie and found out from @NinaDobrev and @menamassoud what it was like shooting in their hometown, working together, fun fan encounters and, yes, @drake. https://t.co/J7qtbQwKUp