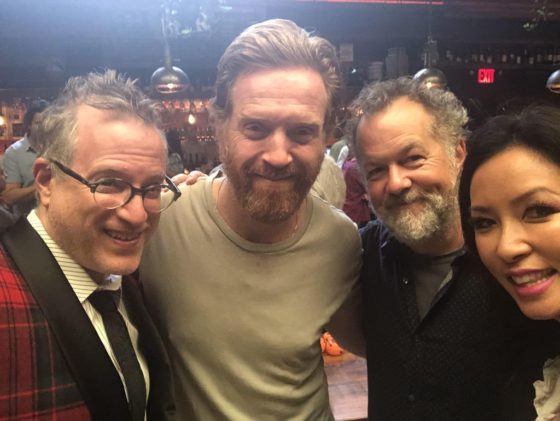 From left: Ben Mezrich, Damian Lewis (Axe), David Costabile (Wags), and Tonya Mezrich at a party for the “Billions” cast and crew. Photo by: Tonya Mezrich

“Billions” marks Mezrich’s first venture into television. For decades, his successful writing career centered on nonfiction books including “Bringing Down the House” (adapted into the 2008 movie “21″) and 2009’s “Accidental Billionaires” (adapted into 2010′s “The Social Network”). Mezrich is also the writer behind “The Mechanic,” a novella currently being serialized by the Boston Globe (the final chapter appears Sunday). The Globe chatted with Mezrich by phone Friday about making “Billions” and his future in TV.

Q. How did you get involved with “Billions”?

A. I met [“Billions” co-creator] Brian Koppelman over Twitter. He reached out to me because of my book “Bitcoin Billionaires,” which he was interested in for the movie world. And he said, “Would you be interested in joining the writers’ room?” I’d never written in TV before. But I know the types of people they have on the show. People like the character Axe are people that I write about normally. Also, my knowledge of crypto and Bitcoin and that sort of thing informed the season. It was a blast.

Q. Tell me about the writers’ room.

A. It’s about six or seven people, laughing, joking around, writing. Once or twice a week, they have guests come in who are real people like billionaires and famous lawyers. It’s almost like a college seminar in a way. 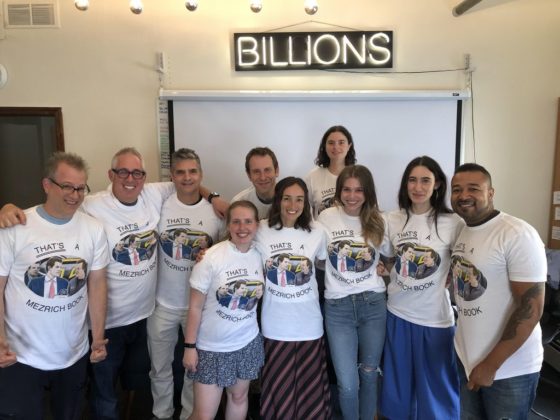 Q. Usually you write alone, right? Is this a new experience for you?

A. Normally, I don’t even wear pants. I filed my first book when I was 24, so I’ve never actually had a real job. I didn’t even know if I had to raise my hand to go to the bathroom. We eat at a communal table for lunch. I’ve worked on movies before, but television is just so much more collaborative. I really wanted to learn it because this is the golden age of television in a way. And “Billions” was like learning at the feet of the masters.

Q. What goes into writing an episode?

A. We spent nine weeks in this room plotting out the entire season, finding the major story line. Once you’ve figured out who’s doing what episode, you put out a big stack of notecards and write down all the scenes. And then there are questions about how costly it would be to film. Basically after that, you write a draft, and the whole room reads it and critiques it. A lot of the dialogue — Brian and David [Levien] make it better, because they know these characters so well. They’ve been writing Axe for five years. But there’s some big themes that they really just let me put my voice into. I think when you watch the episode, if you’ve read my books, you’ll know which parts are mine.

Q. What’s the best part of the process?

A. It’s amazing watching Damian [Lewis] say the lines that you wrote. As a book author, you write a book and you never watch anybody read it. I also really enjoyed sitting in a room with these writers. That’s something I miss being the kind of writer I am. I’m alone six months out of the year. This whole lockdown is very normal to me, because this is how I normally live.

Read the rest of the original article at The Boston Globe