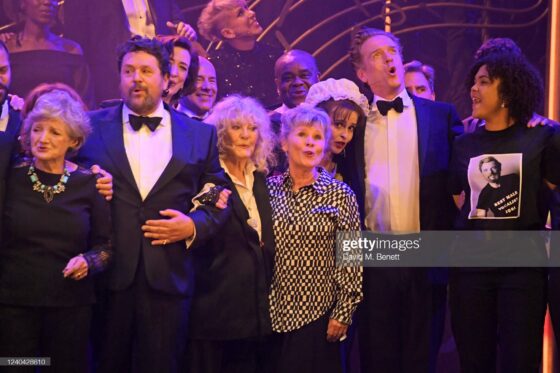 Old Friends, the live performance screened concurrently to an overspill audience in the Prince Edward Theatre, offered conclusive evidence of that fact. The evening, aptly subtitled “A Celebration”, was to raise funds for the Stephen Sondheim Foundation, generating new musical theatre talent for the future.

We first heard Daniel Evans, the Tony-nominated Seurat from Sunday in the Park With George, intoning that show’s famous paean to art, following which were close to 40 numbers, performed by those whom you might expect to hear doing certain songs as well as some surprising pairings of singer and song: Janie Dee’s tongue-twisting “The Boy From …. “ a comic master class all its own. Perched above the stage were the conductor Alfonso Casado Trigo and an orchestra numbering 29 in all, as per the programme.

The comedian Rob Brydon isn’t known for his Sondheim credentials but led from the front exuberantly on both “Comedy Tonight” and “The Little Things You Do Together”, partnering on the latter with Haydn Gwynne. She, in turn, reappeared toward the end of the first act with a roof-raising “The Ladies Who Lunch”, a song she has sung in a concert version of Company before.

At one point, a caped figure in red with her back to the audience scampered into view. Turning round, this mysterious figure was revealed to be none other than Bernadette Peters, the original Witch from Into the Woods on hand as the star American import of the night, the rest of a stellar cast consisting of homegrown UK talent. It wasn’t a stretch to find Peters on top of that show’s “Children Will Listen”, the shiveringly moving song she introduced back in the day.

But co-directors Maria Friedman and Matthew Bourne, with a hefty assist one assumes from Mackintosh, gave Peters two of the songs that belong to Little Red Riding Hood: “I Know Things Now” and “Hello Little Girl”, the latter here sung opposite a full-voiced Damian Lewis, who played the Wolf in the 1998 Donmar Warehouse revival. Both songs met with roars of approval at the perpetual youthfulness of a Broadway legend now, the programme reminds us, in her seventh decade and one of the busiest performers of the night.

Peters returned after the interval to “bump it with a trumpet”, or so the Sondheim lyric puts it, alongside Bonnie Langford and Anna-Jane Casey on “You Gotta Get A Gimmick”. That was followed soon after by an especially rending and desolate “Losing My Mind” from Follies, on which Peters hit some challenging high notes dead-on and brought the audience to its feet.

The first of multiple standing ovations went earlier on to Judi Dench, now 87, returning to her signature song, “Send in the Clowns,” from A Little Night Music, a show she performed at the National Theatre almost 30 years ago. The lyrics tell of a heartsick woman fretting about “losing my timing this late in my career” – not a fate remotely shared by Dench herself.

Very much present was Michael Ball, a onetime Sweeney who partnered the ebullient Mrs Lovett of co-director Friedman on “A Little Priest” and who fielded two songs – “Loving You” from Passion and “Could I Leave You” from Follies – written for female characters but here in the service of Ball’s forceful baritone.

Ball’s onetime Mrs Lovett in the 2012 West End revival of Sweeney Todd, Imelda Staunton, made her entrance late on to jolt the audience to its feet once again with “Everything’s Coming Up Roses” from Gypsy – that show, like West Side Story, given its due at the concert even though Sondheim wrote only the lyrics for those two titles and not the music. (The West Side Story sequence made clever use of the set for Les Miserables, the Sondheim Theatre’s regular tenant which, Mackintosh reminded us, would be back on view from the next night.)

Other emotional highlights included any and all appearances of Julia McKenzie, arguably this country’s premier interpreter of Sondheim, now 81 and stepping foot on a stage, Mackintosh pointed out, for the first time in 24 years. Given snippets of music rather than full numbers, McKenzie led a mournful pictorial tribute to Sondheim to the tune of “Not A Day Goes By” as photos of the composer through the years were projected high above the stage: Peters picked up the song where McKenzie left it.

Petula Clark, 89 and an ongoing West End presence in Mackintosh’s production of Mary Poppins, proffered a near-definitive “I’m Still Here” from Follies, in which she seemed to have lived every syllable of that anthemic showstopper. “Look it up,” she wisecracked at one point, referring to the song’s famously puzzling reference to “Beebe’s Bathysphere”.

Read the rest of the original article at London Theatre