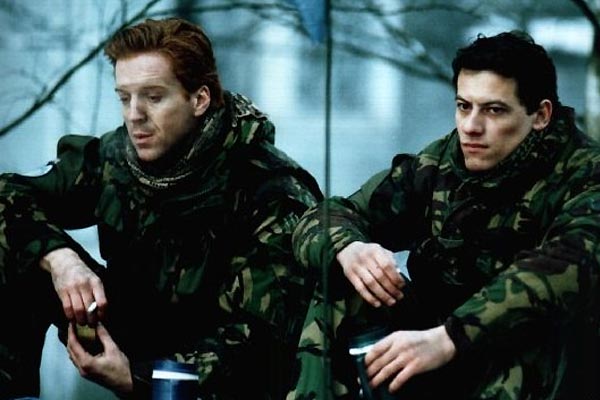 END_OF_DOCUMENT_TOKEN_TO_BE_REPLACED

LONDON— “A HIT, A VERY PALPABLE HIT!” cries the courtier Osric during the climactic duel of “Hamlet.” And in the Broadway production now at the Belasco Theater, those hits are palpable indeed.

Productions of “Hamlet” are often distinguished by verse speaking or physical design. Jonathan Kent’s current staging, imported from the Almeida Theater Company in London, offers an additional virtue in the face-off between Hamlet (played by Ralph Fiennes) and Laertes (Damian Lewis). Beginning on a white rectangular fencing mat, the fight soon spills beyond it, weaving among the chairs of Claudius’s dismayed court as the two combatants become increasingly fevered.

END_OF_DOCUMENT_TOKEN_TO_BE_REPLACED

Claim to fame: The New York Times hailed him as “The new Ralph Fiennes? The next Hugh Grant?”

Distinctive features: Six foot three. Flaming red hair. “I wasn’t aware of my hair until critics started talking about it as part of the performance,” says Lewis good-humouredly. “Maybe there’s a whole play going on on top of my head.”

END_OF_DOCUMENT_TOKEN_TO_BE_REPLACED

Who Will Be The New Ralph Fiennes, The Next Hugh Grant?

LONDON— NOT LONG AGO, DANIEL Day Lewis and Kenneth Branagh were the British names on everyone’s lips when it came to actors; more recently, Hugh Grant and Ralph Fiennes have dominated Hollywood’s imagination. Which raises the inevitable question: Who among current British actors are poised to become the next Hugh Grant and the next Ralph Fiennes?

END_OF_DOCUMENT_TOKEN_TO_BE_REPLACED

Hamlet in the Park – Theatre

This most excellent canopy the air, look you . . . It makes a difference to when you can see the firmament Hamlet is talking about, and here is one of the gains of watching Hamlet in the Open Air Theatre in Regent’s Park. With the sky above he counts himself king of infinite space; amid the theatre he might be bounded in a nutshell. END_OF_DOCUMENT_TOKEN_TO_BE_REPLACED

There are some actors who approach the role of Hamlet via a rigorous apprenticeship in parts that have more than a smack of the Prince of Denmark: Konstantin in The Seagull, say, or Oswald in Ghosts. One such is Simon Russell Beale who is to play Hamlet, at long last, for Sam Mendes. At the opposite extreme are those actors who find themselves pitched in at the deep end early in their careers and prove that they can swim with precocious bravura.

At the Open Air Theatre, Regent’s Park, there is now an egregious example of this latter type in Damian Lewis, who tackles the role in Tim Piggott-Smith’s otherwise patchy production. Lewis has all the stage presence and captivating instincts of a Michael Sheen. Long-limbed, in a black bum-freezer jacket, he reminds you a little of a Dickensian hero.