Anna Wintour waited patiently at the bar to give Damian Lewis a hug just as he arrived Monday night at Cipriani in lower Manhattan for the season two premiere of “Billions.” 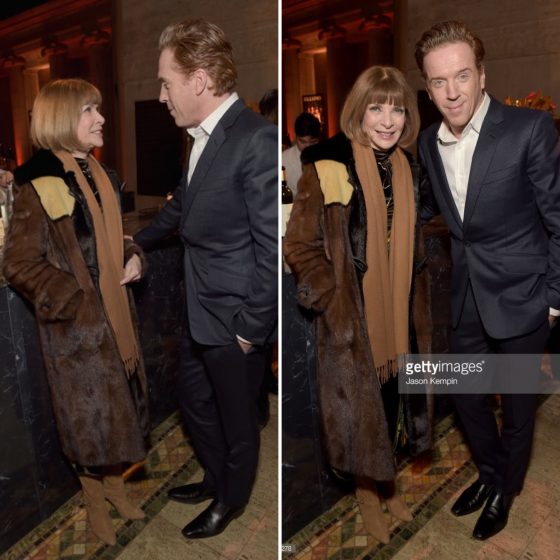 The Vogue editor-in-chief was among the high net worth guests who turned out to toast the Wall Street-themed drama’s Feb. 19 return on Showtime. Knicks coach Phil Jackson and New England Patriots owner Robert Kraft also made the rounds at the screening and party, appropriately held at the venue across the street from Wall Street’s iconic charging bull sculpture.

Showtime CEO David Nevins gave a shout-out to co-creators and showrunners Brian Koppelman and David Levien for their deft touch in delivering the “Billions” mix of sudsy drama and heady commentary on the 1% and their discontents. The show’s already large ensemble cast — anchored by Lewis, Paul Giamatti, Maggie Siff and Malin Akerman — has been enhanced this year with such notable additions as Eric Bogosian, Christopher Denham, James Wolk and Asia Kate Dillon. It took Koppelman and Levien a few minutes to call out all of the actors assembled for the screening — and to give a little good-natured ribbing to Giamatti for missing the event.

Koppelman and Levien promise that the investment viewers made in season one last year will continue to pay off in season two, as the battle between Lewis’ hedge fund king Bobby Axelrod and Giamatti’s crusading federal prosecutor Chuck Rhoades only intensifies, and draws in more colorful characters (including a comedic turn by a certain outspoken billionaire with a TV show of his own). The response to the sneak peek of episode one that Showtime unleashed last week for free online has been gratifying, Koppelman said.