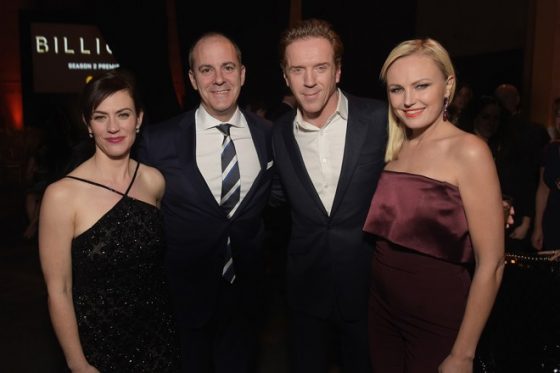 Billions, the Showtime series about a billionaire hedge-funder and a hard-charging U.S. Attorney, held its second season premiere in a perfectly apt venue—the ornate Cipriani in the Financial District, opposite the famous bull statue.

Malin Akerman admitted that getting to play a billionaire’s wife has one delicious perk.“It’s quite exciting to wear these beautiful clothes,” she explained. “I’m a shoe and purse person, so they come in with these beautiful shoes and bags and we get to borrow them, so I feel pretty fabulous.”

Akerman said her favorite item so far has been a pair of blue suede Balenciaga boots.And as for personal purchases, The Heartbreak Kid actress explained that since she became a mom four years ago to son Sebastian, she doesn’t splurge on pricey items like she used to.

“I did buy a pair of Yves Saint Laurent little boots with fringe because they’re switching designers and I just felt like I wanted to invest in something that I’ll wear a lot,” she confessed. “They’re very expensive and there was a bit of guilty feelings as a mom, but I thought, you know what? I work hard, so every now and then I can give myself something.”

Costar Maggie Siff copped to having conflicted feelings about the obscenely wealthy like the hedge-funders in the series, “but I am very interested in telling their story and investigating what that is and what drives that profit motive.”

Read the rest of the article at Vogue