Billions Season 2: Where It Left Off and Where It’s Headed 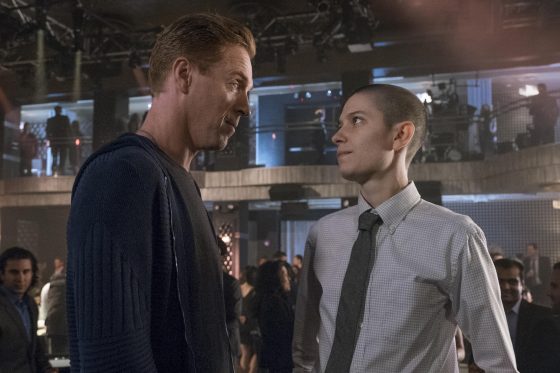 Showtime’s Billions came onto the scene last year as a reaction to the topsy-turvy world of power finance that spun out of control into one of the worst monetary disasters the United States ever saw. Wrists were slapped and we recovered, sort of, but the high-wire act of hedge funds continues to threaten to topple over on the middle and lower classes at any moment while the money bags pile up precariously.

But Billions‘ Wall Street backdrop is really just a setting for what the show is actually about: a pair of grade-A A-holes going after each other until one cries “uncle” or is dead — preferably both, in their eyes. And Wall Street is also just an avenue for some incredible acting. Damian Lewis plays Bobby “Axe” Axelrod, an arrogant CEO of a hedge-fund management company who dabbles in less-than-legal ways to get an edge and make an extra billion. Paul Giamatti plays Chuck Rhoades, a curmudgeonly U.S. Attorney who gets off on crushing finance playboys (and S&M play, as we learned early on in the series).

These two titans battled in Season 1 like Godzilla and Rodan, leaving reputations in ruins and turning relationships into rubble as they stopped at nothing to take each other down. Ostensibly, Chuck is supposed to be the “good” guy taking down the criminal, but in the world of Billions, winners and losers aren’t made through their moral choices, they’re made by their tenacity and willingness to lose everything just to be the “winner.” In either case, the real winner of Season 1 was Maggie Siff‘s Wendy Rhoades — Billions‘ best character — who ended up leaving both of these men behind.

Season 1 had its moments, but rarely succeeded in being something other than an elaborate pissing contest full of heavy-handed metaphors, schoolyard taunts crafted by Ivy League graduates with oversized sex drives and Showtime’s typical style of pushing the macho envelope — Sex! Drugs! Rock ‘n’ Roll (via a Metallica cameo)! — until it’s shredded to pieces. The cautionary message of Billions was the dangers of power on both sides of the law, but it got buried beneath showmanship. Who knows, maybe that was the actual message.