He May be the Liege, the Nagusi, the Sahabi, but Bobby Axelrod is Lonely 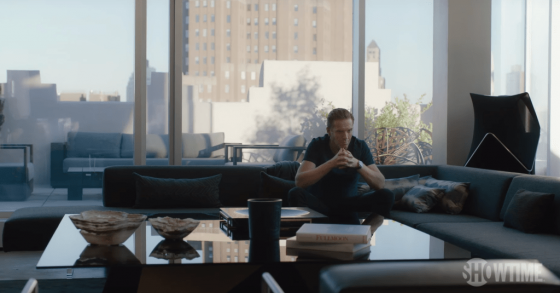 Season 3 picks up a few weeks after the man with nothing to lose put the cuffs on the man with unlimited resources.

Axe is indicted, the government has frozen his assets, and he and Lara are separated. While Chuck has gained his marriage back, he is not doing great, either. He has thrown his dad and his best friend under the bus to get Axe, lost his entire trust fund along the way and is now trying to figure out the the new administration in DC.

“Tie goes to the runner.”

Well, at least in the new AG Waylon “Jock” Jeffcoat’s world. We meet him and his Lucchese boots in the opening scene with “I was born in San Antone” playing in the background. Jeffcoat is from West Texas: He breeds horses, loves baseball, and believes “tie goes to the runner” when the big business is concerned. Jeffcoat gives Chuck the good news that he is keeping his job, at least for now, along with a list of high-profile cases his office should slow down on. 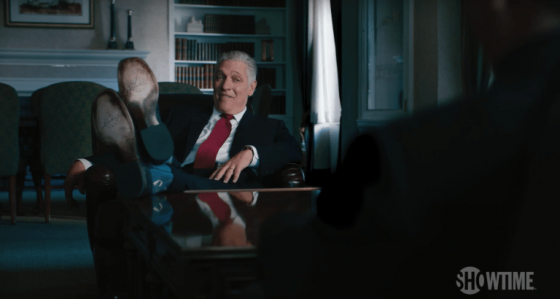 At the ballroom reception to celebrate the “new sheriff in town” Chuck finds the words to compliment Dake for freezing Axe’s assets in the world of wrestling: Ivan Koloff’s Bear Hug and Iron Sheik’s Camel Clutch. YIKES! But Dake is not as impressed with Chuck as the latter is impressed with him. Chuck has committed a crime of passion and his DNA is now all over the crime scene: “Wendy’s short” requires a private conversation.

It turns out Dake may not be the Calvinist he seems to be after all. He is willing to keep Wendy’s name out of the case should Chuck do him a favor that he will name later. The challenge for Dake is to come up with compelling arguments to keep Bryan away from Ice Juice transactions ( “I have forensic financial analysts combing through that right now”) and the identity of the initial tipster (“My tipster is not exactly Blue horseshoe loves Anacott Steel“).  I do not think it will take long for Bryan, who lived and breathed Chuck’s ways for two seasons, to find his former lord’s fingerprints in the case.

Axe Capital employees are completely in the dark as the boss, whose funds are as frozen as Otzi in the goddamn Alps, is nowhere to be seen at the new Axe Capital HQ in midtown Manhattan. Besides, a platinum-invite “Ideas Dinner” is around the corner and the new CIO needs the nervous portfolio managers and traders to keep calm and find an idea bright enough to prove Axe Capital is still the sharpest shop in town. As Taylor guarantees bonuses to motivate the employees, Wags shows he knows his Top Gun:

“Your ego just wrote a check that your body cannot cash.”

But where the fuck is Axe?