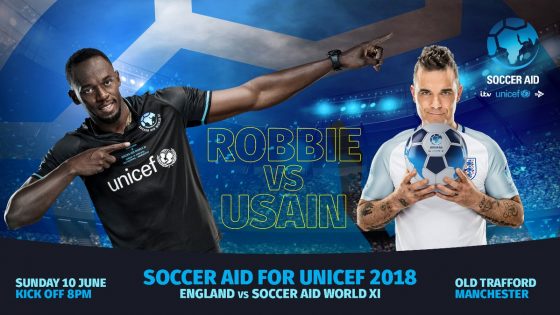 Today it was announced that Damian will return for Soccer Aid 2018, joining Team Robbie playing for England.  Damian played in the very first Soccer Aid back in 2006 and has gone on to make several subsequent appearances in the match, mainly as a central midfielder.

Homeland and @SHO_Billions star @lewis_damian returns for England on 10th June. Will he get on the scoresheet after hitting the bar last time out? For tickets and info 👉 https://t.co/hcEjAVYT3F #SoccerAid #TeamRobbie #Unicef #ITV #STV pic.twitter.com/N9K1fZABJ0

Here are the details:

What: Soccer Aid for Unicef
Who: England vs Soccer Aid World XI
When: Sunday June 10, 2018
Where: Old Trafford, Manchester
Time: Kick off at 8:00 pm (BST)
How: Purchase tickets here or call 0161 444 2018
Broadcast: ITV and STV
Presenters: Kirsty Gallacher and Dermot O’Leary
Referee: Mark Clattenburg
Teams: England Team Captain Robbie Williams vs. Soccer Aid World XI  Team Captain Usain Bolt
Why: Soccer Aid brings stars, football legends and all of us together to raise money so that more children around the world can grow up healthy, happy and safe. The football match was started by Robbie Williams and Jonathan Wilkes in 2006. Over the last 10 years, the £24 million raised by Soccer Aid has enabled Unicef to help more children than any other humanitarian organization. Unicef provides life-saving food, vaccines, clean water and protection from violence to millions of children around the world.

And guess what former Homeland co-star joins Damian on the field?

Where else would you see @lewis_damian and @DavidHarewood on the same team?! David joins #TeamRobbie alongside his former Homeland co-star Damian Lewis! Buy your tickets: https://t.co/ihLTUR4Ruq #socceraid #unicef #ITV #STV pic.twitter.com/8sU1FaRqaB

It's @robbiewilliams' England Vs @usainbolt’s Soccer Aid World XI at Old Trafford on Sunday 10th June. Two teams. One goal. A game like no other! Tickets available at https://t.co/hcEjAVYT3F or you can call 0161 444 2018 #SoccerAid #TeamRobbie #TeamUsain pic.twitter.com/mwF6AhJRpJ