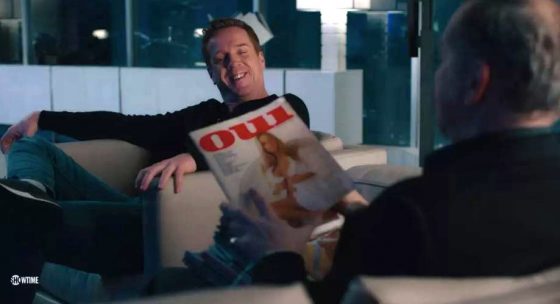 Here is the best, worst, and most from the 11th episode of Season 3

We’ve reached the most important time of the year for Axe Cap employees: compensation reviews. That means two things: The employees have to plead their case to Axe for why they deserve a hefty bonus, and they also have to pray that Axe is in a giving mood. [Narrator voice] He is not in a giving mood.

But that’s not the only drama stirring in the penultimate episode of Billions’ third season, “Kompenso,” as Chuck orchestrates a clever plan to take down Attorney General Jock Jeffcoat, and runs into his old buddy Ira at a very delectable restaurant owned by an apparently very delectable man. There’s some great stuff to run through in this week’s superlatives, so let’s not waste another minute.

For a second there I thought I accidentally switched to the Food Network, but nope: That is the Salt Bae. “I can’t believe you brought me here, thank you,” Sacker tells Chuck, and I would like to extend that same gratitude to Billions.

The way Sacker looks at Salt Bae is, well, like the way Salt Bae looks at a pristine slab of meat that needs seasoning. If there’s any justice in the Billions-verse, we will have a romantic subplot between Sacker and Salt Bae posthaste.

Axe has a tradition on Axe Cap comp day, which is to find the old boss who once shorted him on a bonus by $50,000 and essentially throw the money back in his face by offering to pay for his breakfast. “Just think,” Axe says. “If I’d stayed, you maybe could’ve owned this hotel.”

The level of petty it requires to do this every year is inspiring, honestly. It’s like the Wall Street equivalent of Draymond Green memorizing the name of every player taken before him in the NBA draft.

Former hedge fund manager Pete Decker is back, and he’s founded a high-concept gym called “Sci-Fit Gym.” People are working out with VR headsets attached to their faces, and look absolutely ridiculous doing it.

This is some Black Mirror shit. I’m sure Silicon Valley will give Sci-Fit Gym a huge round of funding for an expansion.

As someone who’s traveled to India … he’s right.

This one goes to Axe, who lowballs Taylor in their comp review, despite the fact that Taylor kept the company afloat when Axe was nearly thrown in jail—and most recently, destroyed their relationship with the very sweet Oscar (Mike Birbiglia!) so Axe could nab another great investment.

Billions is a show that loves analogies, so let’s do a sports one: Don’t lowball your best player! “Axe is going to regret treating Taylor like crap,” I immediately wrote down in my notes after this moment. Let’s keep that in mind as we move along.

The Axe Cap employees we see chatting with Axe act as you would expect: Ben Kim is nervous (duh), and Mafee is thrown off by Axe making an Undertaker reference. (I mean, Mafee does wear his WWE-heavy heart on his sleeve.)

The best and most surprising chat, however, is between Axe and Bonnie, the newest member of the team who’s established herself as someone who doesn’t take shit from anyone and who finds the sexual energy of the Joseph Gordon-Levitt vehicle Don Jon really fucking hot. Despite the fact that she’s new, she wants half a million from Axe. “I didn’t say I deserve half a million, but you rarely get what you don’t ask for so I’m fucking asking—otherwise, why are we doing this?” she says. Hell yes.

“Oh, this is going to be fun,” Axe replies. We don’t know what Bonnie’s bonus ended up being, but I think Axe developed a begrudging respect for her and perhaps rewarded her. Can we please get a mini Bonnie arc in Season 4? I’m obsessed with her.

Praise be! The Chuck Pats are back in full force, and in “Kompenso,” Chuck Rhoades delivered his most compassionate Chuck Pat of the season to Ira. Yes, Ice Juice Ira!

They ran into each other at the Salt Bae restaurant, and were beginning to reconcile their friendship. Ira, unfortunately, is having some issues with his new wife Taiga—yes that is her name!!—who said that she’s taking a sizable chunk of his money to open a SoulCycle Meets Yoga studio, when really she’s using it in an affair with another man. Chuck genuinely sympathizes with his friend, so he gives him a brief, but soothing Chuck Pat.

There are many ways to appreciate the brilliance of Emmy-winner Paul Giamatti, but the subtle changes he imbues in his Chuck Pats over the course of three seasons needs to be examined by the next generation of actors. I’d happily do a Chuck Pats 101 lecture at NYU Tisch’s School of the Arts—NYU slide into my DMs.

Spyros doesn’t have a comp meeting scheduled, which he assumes was some kind of oversight on Axe’s part. In the span of 30 seconds, Spyros compares Axe Cap without his maneuvering as “dirtier than the porta-potty outside a third-rate donkey show,” refers to himself as the Greek Freak—”You can’t call yourself that,” Wags accurately retorts—and paraphrases a Godfather quote because he wants to wet his proverbial beak.

You can imagine how Axe felt about this. It’s beautiful.

In anticipation of taking down Jock Jeffcoat, Chuck gets a cowboy hat. 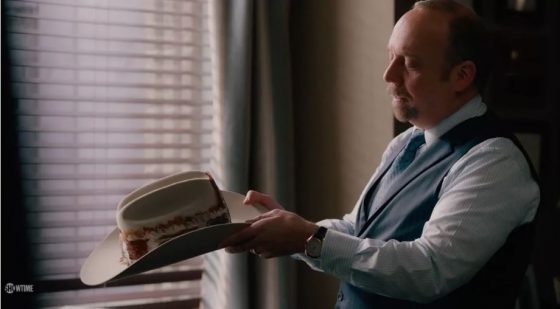 Is it bad that my first thought when imagining Chuck with the hat on was, “He’s probably going to wear that when Wendy paddles him?” Also, much like Brendan Fraser in Trust, I never considered Paul Giamatti in a cowboy hat, but now that it’s been introduced, I’m definitely digging it.

Axe sets up a meeting with the man Taiga is having an affair with—and wait, is Saturday Night Live cast member Alex Moffat?! 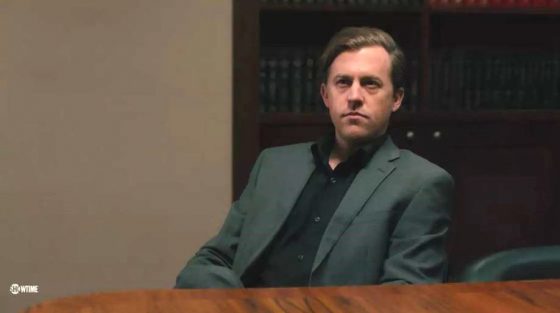 What a stroke of genius casting the man who once played “Guy Who Just Bought a Boat” as a character on Billions. Unfortunately, his character has a name, so Billions isn’t literally incorporating actual SNL comedians into the show. But boy, does Axe scare the shit out of him when he threatens to build a federal case against him. A federal case, to quote Chuck, is the “worst fucking thing there is.” It’d probably result in a full sentence without parole—the worst kind of sentence, because at least with parole, Axe points out, he could be at home spending his time “trying to convince the pizza delivery girl to give you a blowjob.”

Chuck decides to meet with Taiga next, though he needs a discreet location so he asks his dad if they can do it at his house—which, Chuck Sr. assumes, means Chuck is having an affair with another woman. “I’ve always said monogamy is a form of socialism,” he says before Chuck can explain the real reason he’s meeting with this woman, which is just incredible.

Anyways, Chuck wants Taiga to sign a postnuptial agreement, divorce Ira, and be on her way—but Chuck Sr. storms in with some marital advice that, as someone who’s never been married, I can only assume is not the best.

Oh, and Chuck Sr. wasn’t finished, because he wants Taiga to take the “lime test.” “You stick your finger in lime juice, put it up inside, and if it stings, get yourself cleaned out,” he says. “Do not bring the clap home to your husband. It’s uncivil.”

Remember how Axe visited his mom at the end of last week’s episode? Turns out, part of the reason he was visiting was to pick up an old stack of Oui Magazine—which is basically French Playboy—and gift them to Wags, who grew up on these things.

In the time Oliver Dake spent offscreen, he was apparently auditioning for a Fantastic Beasts sequel. 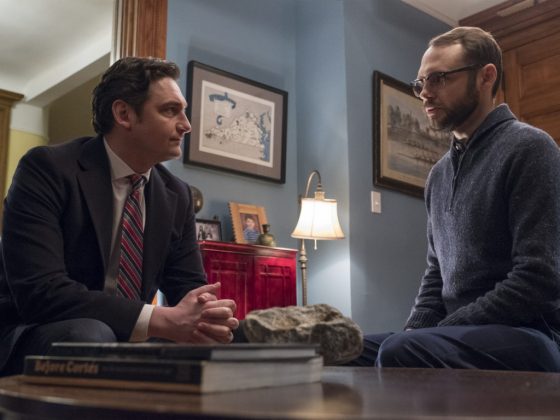