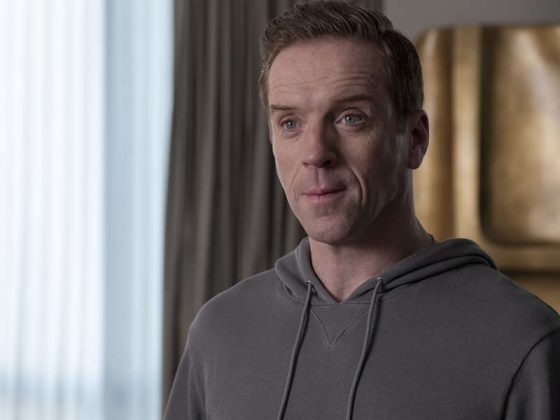 If I’m reading into the title of tonight’s Billions episode correctly, Axe is the only one of the four main characters who best understands that they are all playing an “Infinite Game.” While Chuck, Wendy, and Taylor each end the episode in pieces, Axe looks the happiest he’s been in months.

But that’s not even the genius of this episode, which was written by co-showrunners Brian Koppelman and David Levien. Its brilliance is in the way Axe callously crushes Taylor and Douglas while also making me cry tears of joy by sending local pizzeria owner Bruno (Arthur J. Nascarella) off to his dream retirement in Florida. With all the sociopathic behavior exhibited and discussed in “Infinite Game,” Axe’s is hidden in plain sight, making him look like the hero on the surface — and that’s pretty darn scary if you think about it.

For the other characters, whose emotional baggage is already well documented, their visible turmoil is a more organic progression. It’s reductive to say Chuck needs serious therapy, because, like Troy said earlier in the season, his problems are so embedded in his psyche that I understand why Wendy is out of options. Chuck’s disturbing “Pancake Eater” story may allow us to have more sympathy for him — it further confirms that Charles Senior is a monster who abused his wife and son through intimidation — but the real tragedy of this anecdote is that there was never any hope for Chuck and Wendy because Chuck’s damaged past already decided his future. Now, Wendy is selling their Brooklyn Heights home and ostensibly committing to the dissolution of her marriage. The painful irony of this development is accentuated via the placement of a freshly baked apple pie in the Rhoades family kitchen as a way of creating “the sensory impression of a perfect home” to prospective buyers — just as Ellen Rhoades attempted week after week with her homemade Sunday breakfasts, to no avail.

I’ve been over the Rhoades marriage for quite some time already, which is why the Taylor-Wendy friendship is the far more interesting “breakup” in “Infinite Game.” Taylor eventually gets hip to Wendy’s phony BFF act, but not in enough time to avoid betraying their father, which was Axe and Wendy’s plan all along. In this week’s sabotage subplot, Axe pays off an Industry and Security bureaucrat (Chelcie Ross, a.k.a. “Connie Hilton” to Mad Men fans) with enough money and adult-film actresses to ensure that the Mason aerospace project never gets off the ground (apologies for the pun). With their investors — including the New York Firefighters’ Fund—threatening to walk, Taylor sacrifices Douglas’ work.

Once Taylor — and Mafee — deduce how Wendy played them, Mafee storms into Axe Cap to ream out his former performance coach, calling her a “garbage person” before being removed by security (though I would’ve liked to watch Mafee and Dollar Bill go at it Rumble in the Jungle–Thrilla in Manila–Zaire! style). It isn’t the most professional form of emotional release, but Mafee gets an “Attaboy” here for one reason: That kind of visceral response to Wendy’s Machiavellian behavior was necessary to allow what’s left of her conscience to start fighting back. I sure noticed the remorse bubbling up behind Wendy’s eyes after Mafee is escorted out. Later, she halts her nighttime run when she’s overcome with sobs, which likely have more to do with the garbage person she’s become than her broken marriage.

Yes, Wendy is a horrible human being, and everything she predicted about Taylor and Douglas’s destruction proved true. However, I do think the Taylor-Douglas implosion was a foregone conclusion even without Wendy in the mix. The father-child falling out mirrors Charles Senior and Chuck’s relationship (which is about to get even uglier now that Bryan Connerty and the FBI are listening in on their phone calls): No business partnership is going to fix what was irrevocably damaged years ago. It’s the age-old story of children so desperately wanting the love of a parent, and the lengths to which they will go to achieve that goal, despite that parent being a toxic presence in their lives.

It’s no coincidence that Taylor references the Turtles’ “Happy Together” in one scene, because, as they explain, it’s actually not a song about a loving relationship but the fantasy of one. Taylor has “imagined” and hungered for a positive bond with their father, and thought this aerospace project would solve their problems. So much so that they ignored all rational thought when it came to keeping Mason Capital alive and almost lost their business as a result.

Now, the business is safe, but there’s nothing to celebrate: Douglas is so self-centered that he can’t see that Taylor choosing their company over his fragile ego was the right move. The future of their relationship is at best uncertain, at worst over. The most devastating part of this story line is the final truth bomb Douglas drops on Taylor: Even if they “win” this infinite game, “it won’t feel like it,” because, like everything on Billions, all successes come at huge costs. This is exactly what Axe — and Wendy, through her intricate mind manipulation — wanted to happen: For the person Taylor loves the most to tell them that they will never truly be able to revel in their accomplishments.

My heart hurts for Taylor because I don’t think of the characters on Billionsas having anything close to a soul — you don’t win the infinite game with emotion. However, much as Taylor tries to push their emotions down into the recesses of their body, their soul is hanging on for dear life. Taylor wants success and love (notice how much time and energy they spent preparing an apartment for not just Douglas, but their mother as well). But between Douglas’s behavior and the cutthroat world they live in, maintaining that soul is proving impossible. Taylor may have grown “colder,” but that last shot of them curled in the fetal position, the camera cutting to black just as their quivering mouth gives in to falling tears, proves that they’re still the most human of anyone in the Billions universe.

Stay with us, Taylor’s soul.