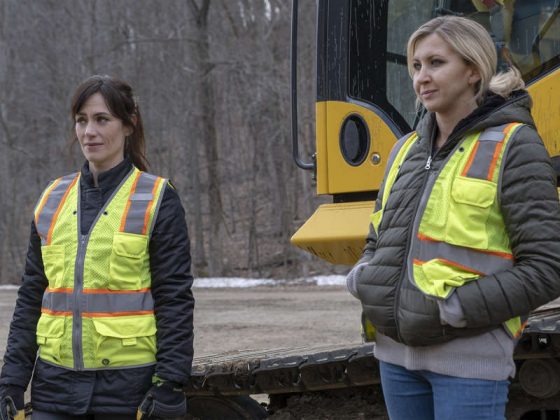 That chain, and this episode, is called “Extreme Sandbox.” The concept is simple: Give people the keys to actual heavy machinery and let them dig holes and smash cars on a closed course to their hearts’ content.

If the concept sounds familiar, perhaps you watched it secure funding for expansion on an episode of the entrepreneurship reality competition series “Shark Tank.” One of the sharks who backed the idea was the real-life billionaire Mark Cuban. Sure enough, he makes a cameo appearance here, playing himself, to greet the fictional billionaire Rebecca when she arrives on site.

“Something about the directness of the metaphor,” Rebecca says to Wendy as they prepare to mount up and dig in, “is going to feel absurd for a minute. I need you to fight that off and own the fact that you’re moving the [expletive] earth.”

She concludes, “Because that’s what you are, and what you do in the actual world.”

And in the meantime, marvel at the rest of this masterly episode, which takes place outside the Extreme Sandbox’s confines. When the schemes that Bobby and Chuck laid in place to destroy their enemies come to fruition, there are no safety precautions. For the people they destroy — while inflicting considerable damage on themselves in the process — the wreckage they leave behind is very, very real.

Of the two erstwhile allies, Chuck makes a more satisfyingly cathartic go of things. As some viewers might have suspected, “the idiot who stands to lose the most” in his and his father’s real-estate scheme was Chuck’s former protégé turned arch enemy, Bryan Connerty, and his Texan overlord, Attorney General Jock Jeffcoat.

The Rhoadeses knew that the two federal attorneys’ zeal to destroy Chuck would leave them wide open for retaliation. More important, from a poetic-justice perspective, they knew using that zeal against Bryan and Jock would be the juiciest way to get it done.

So from a very early stage, Chuck and Charles discussed bribing officials all the way up to Treasury Secretary Todd Krakow, part of a sting operation designed to catch Connerty and Jeffcoat breaking the law in pursuit of the Rhoadeses’ wholly imaginary lawbreaking.

Ignoring the warnings of his underling Kate Sacker, whom Chuck brought on board to help deliver the coup de grace, Bryan gets busted listening to a sealed tape recording in which Chuck and Charles hilariously make fun of him with the absolute certainty that he’s listening in. He’s in the process of clumsily resealing the tape that predicted his demise when the arrest is made. Surveillance photos of his break-in at Charles’s house seal the deal.

Read the rest of the article at New York Times