Damian Makes His First Documentary Spy Wars With His Brother 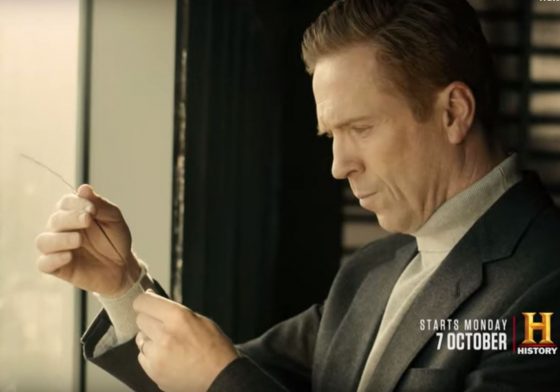 Few British actors have set foot inside Central Intelligence Agency headquarters in Langley, Virginia, but as the star of the American spy thriller, Homeland, Damian Lewis was granted unprecedented access as part of his research.

While he jokes that his meeting with the director of the CIA, John Brennan, is “classified”, the story demonstrates his ability to get under the skin of characters through keen observation of the tiniest details. He describes the “incredibly poker-faced field operatives who had revealed only the smallest increments of expression and emotion, until Brennan walked in and the temperature in the room rose instantaneously.”

It’s an experience that stood him in good stead for his latest project, Damian Lewis: Spy Wars, which also marks his first foray into factual television.

The eight-part series – the first to come out of Lewis’ newly-launched Rookery Productions – airs on History from Monday in the UK and showcases the true stories and remarkable characters behind some of the most important international spy operations of recent years.

“I’ve done a lot of research over my career for Homeland and a movie I made, Our Kind of Traitor, and have read my John le Carre like everyone else. I enjoy the genre and thought it was an opportunity to look behind these popular stories and find out something a bit more intimate and personal about the people themselves, their decisions and the ramifications on global politics,” he says.

Does he think actors and spies are at opposite ends of the spectrum, given an actor craves the limelight and a spy is someone who wants to tuck themselves away? “No, I’d disagree entirely. Actors are often very introverted and often find public situations and public contact difficult. I don’t!” he says, emphatically.

He and his wife, actor Helen McCrory, are known for enjoying a party and while he’s far from from the alpha-male Bobby Axelrod in Billions, he comes across as equally poised, stylish and above all, self-assured.

Lewis fronts the thriller-esque mix of testimony, dramatic reconstruction and archive, which centres on heroic, corrupt or downright egocentric individuals. They range from the former KGB agent, Oleg Gordievsky, who is credited with pulling the world back from nuclear annihilation, to the incredible spy swap story involving Russian illegals masquerading as Americans – a story which ends on British soil with the attempted novichok poisoning of former double agent Sergei Skripal in Salisbury last year.

It was something of a departure for Lewis, who left behind the glamour of the Billions set in New York – where he films for three weeks out of every month, for five months – to shoot in the spit and sawdust of an abandoned warehouse in London. Unlike some stars who are parachuted in to head up a subject they have little knowledge about, Lewis found “the journalistic aspect fun”. Highly driven, he typically gets up between 5 and 6 a.m. or works until midnight on last-minute scripts.

Lewis worked closely with the co-producers of the series, Alaska TV and his input was extensive from the outset; he was involved in everything from discussing which stories to follow, script-editing and choosing music and his suit and Bond-like rollneck, to the overall presenting style which he was adamant would not be a stiff ‘News at 10’ approach. “You know, a journalist walking towards camera with his thumb and forefinger together, talking about what’s going on in the building behind me.”

What was less alien to Lewis was getting to grips with the spies. Whether it’s Nicholas Brody in Homeland, Bobby Axelrod in Billions, Henry VIII in Wolf Hall, or Major Richard Winters in the HBO classic, Band of Brothers, Lewis is an actor who strives to understand the psychology of the roles he’s playing.

“Everyone agreed quite quickly that we’ve got to get into the minds of these people. What’s the personal, emotional and psychological disintegration that can happen in you? And what motivates you? There’s an acronym that all the intelligence agencies use which is MICE: Money, Ideology, Coercion and Ego. If you think you can identify an individual which is vulnerable for any one of those reasons, you target them.”

The series is incredibly timely. It may be decades since the fall of the Soviet Union but the Salisbury attacks story is ongoing and the whistleblower at the centre of the impeachment inquiry against President Donald Trump is a CIA officer, with Trump himself discussing the “spies and treason” of the past with staff.

One of the executive producers on the series is Damian’s brother, Gareth, who thought the ‘real Homeland’ idea would appeal and knew of Damian’s passion for Ben Macintyre’s spy thrillers which he had read for Radio 4 listeners.

“What fascinated Damian was the pressure these people were under – similar to characters he’s played, like Brody – where they are deceiving everyone in their sphere, including the people they love, and often themselves. It’s that complexity of character that we both love and that’s at the heart of the series.”

Not everyone would want to work with family members – although Lewis met McCrory, when they co-starred in the play Five Gold Rings at London’s Almeida Theatre – but the brothers have always got on. They indulged in make-believe as kids, riding around on their Grifter bikes solving mysteries, and loved watching TV, especially the US cop series CHIPS where they would adopt the personae Poncherello and Baker from the California Highway.

Naturally, they had their fights too, which Damian remembers as “ferocious.” It was he who delivered the hardest punch, but back then, he says, Gareth was the actor who knew how to get him into trouble with his mother. Evidence of the bossy old brother remains when you see them together, with Damian clearly loving robust debate and poking fun at, interrupting or challenging Gareth.

They both attended Eton, where Gareth describes Damian as “a golden boy” and while they were in different houses and rarely saw each other, Damian has admitted he was, and still is, protective of his younger sibling.

Do public school boys make good spies, following the tradition of the great Kim Philby? As Lewis’ friend Macintyre has said: “There is no deceiver more effective than a public-school-educated Brit. He could be standing next to you in the bus queue, having a Force 12 nervous breakdown, and you’d never be any the wiser.”

Is there something about the psyche of the British, or perhaps more specifically, the culture of boarding school, that naturally leads into a job in ‘certain parts of the foreign office’? There are parallels, admits Lewis: “If you’re sent away from home at the age of eight, and you are asked to cope emotionally with a new situation, I think there is a natural and instinctive compartmentalizing of one’s emotional life… a mild sociopathy…and that’s very helpful to a covert life in espionage.”

Whether, or to what extent he compartmentalized, he would nevertheless return home to a tight-knit family involving noisy Sunday lunches with a “strong, loud, intelligent, opinionated family”, he says.

The challenge of his latest project was not taking direction from family, but the difficulties of bringing spycraft to life in an entertaining way.

“Spycraft that has worked over the past 40 or 50 years is incredibly lo-fi. There are exotic words like ‘dead drop’ and brush past’ but it literally means you walking into a supermarket with the same Sainsbury’s carrier bag as me, and us leaving with each other’s bags.”

His next project is a very different beast entirely – Dream Horse – based on a true story about a Welsh ex-mining community putting together a syndicate and buying a “working-class horse” for £300 – and winning major races. “It’s sort of Billy Elliott or Brassed Off meets Seabiscuit. It’ll make you laugh, it’ll make you cry.”

What’s next for Rookery Productions is undecided as the business is “percolating in the background” so for now,

Read the rest of the original article at iNews