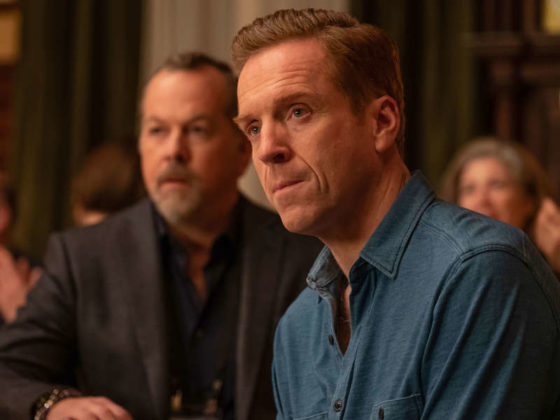 Who is more abhorrent? The guy who imperiously proclaims to be a “monster,” the guy who hides his monstrous qualities behind a façade of bogus humility, or the guy claiming to keep his monster at bay with a code? This is a question that pops up on Billions regularly, making an episode like “The Chris Rock Test” a whole lot of fun — because the answer is, as always, they’re all equally repugnant.

In one corner, we have Chuck Rhoades, holding firm to his pledge to change himself for the better. On the surface, he’s following through on his promise, starting off the episode in therapy. (The brutal reality of COVID-19 once again weaseling its way into our TV escape; Chuck’s therapist is played by the late Mark Blum.) During the session, Chuck is asked to name a wisdom avatar, and his choice speaks volumes. He’s been reading Dexter Morgan novels lately, so Chuck selects Harry Morgan, father and conscience of the literary serial killer, as his source of guidance. (A Showtime drama referencing the basis for another Showtime drama? Who would’ve thunk it?)

But after Governor Bob Sweeney (Matt Servitto) unceremoniously relieves Chuck of his jurisdiction over Axe’s cryptomining case — punishment for Chuck not throwing the book at the billionaire — the New York State attorney general is even more fired up in his mission to put Axe behind bars.

“A move like this really awakens my dark passenger,” Chuck scowls to Kate, referring to Dexter Morgan’s inner demon. And just as Dexter developed a code to control this dark passenger — killing, but for what he deemed “the right reasons” — Chuck intends to do the same, in the name of justice. He then nearly out-Chucks himself with his pledge to “purge the world of villainy,” including himself, tasking Kate with holding him to his own code.

No one is getting murdered on Chuck’s watch — at least not in this episode — but this week’s self-serving scheme involves the AG engaging in some insanely underhanded play: “helping” his longtime ally, Judge Adam DeGiulio (Rob Morrow), do damage control on a recently unearthed “torture memo” he wrote years ago. Said damage control results in the destruction of DeGiulio’s Supreme Court aspirations and a new gig as solicitor general.

Should it come as a surprise that the entire DeGiulio scandal was the brainchild of Chuck Rhoades? It certainly doesn’t to Kate, who not only cracks her boss’s ruse to the letter, but calls him on leaking the torture memo in the first place: As soon as Chuck was stripped of his New York criminal jurisdiction regarding the cryptomining case, he decided to bring Axe to justice via the Supreme Court instead. Since he’ll need a prosecutor in his pocket for that, who better than his old pal for the job?

Over in another corner, at upstate New York’s majestic Mohonk Mountain House, we have Bobby Axelrod, in attendance at Mike Prince’s financial conference and ready to plot with Wags and Taylor by his side. If you recall from last week’s episode, after Axe and Wags emerged from their ayahuasca-fueled vision quest, Axe bade their shaman farewell with this telltale line: “Until we see each other and move your knowledge into the world.” Turns out that shaman is the key to a big medical ayahuasca deal Axe has planned, making it the only reason for an Axe Cap presence at the Mike. That’s right, the Mike. How humble can someone like Mike Prince be if he’s named a conference after himself?

This question is explored during a public fireside chat. Axe and Mike engage in the predictable dick-swinging contest over who had the more hardscrabble rise to the top, with Axe astutely pointing out some uncomfortable truths: (1) He’s a “carnivorous fucking monster,” and (2) Mike may like to hide behind his nice-guy exterior, but he’s just as much of a monster.

While we wait patiently for Mike to inevitably unleash his evil side, there is a fascinating Wags subplot percolating. Normally, Wags can do his usual hard sell with his eyes closed, especially when it’s at a strip club. But if the club’s main attraction is his daughter, Mandi, then all bets are off. As a testament to David Costabile’s brilliant acting, we don’t need to see Mandi — or even what happens next. All we need to see is Costabile’s face crumble, and his rigid, numb body in need of a hug the morning after as he laments to Axe, “I failed the Chris Rock test.”

He did, but he also passed the Billions test, which seems to be that you can’t be a character on this show unless you’re a neglectful parent. The only character who has ever demonstrated anything that resembles good parenting is Malin Akerman’s Lara Axelrod, and she’s not around anymore. So, I rest my case.

That night at the Mike conference farewell dinner, Axe and Wags have plenty to celebrate: Wags eventually closed the medical ayahuasca deal with an FDA employee, and Axe secured necessary clinical trials with a hospital CEO — the selling point in both cases being their shaman, Bram Longriver (Henri Binje). Naturally, just as they get up to leave, Mike introduces his “friend and key partner in a breakthrough health initiative.” Yep, he stole Axe’s shaman.

Oh, it is on between these two, but the next Axe vs. Mike bout will have to wait as Axe sketches out his next move with Wags. It’s so unbelievably bonkers that it makes perfect sense for Billions: Axe wants to become his own bank. And he’s doing it for the most sensible reason he’s come up with yet, so he can die in his own bed rather than a prison cell.

As for Taylor, they’re continuing to fight a losing battle to maintain their soul. While at the Mike, they endure numerous awkward run-ins with their ex, venture philanthropist Oscar Langstraat (Mike Birbiglia), whom they screwed over back in season three. Taylor’s vulnerability is then compounded by the news that Wendy has poached Mase Cap’s investor relations guru (and Taylor’s girlfriend), Lauren Turner (Jade Eshete).

So when Chuck summons Taylor for a darkness-on-the-edge-of-the-East River meetup, they’re well-positioned to take his portentous advice. Chuck knows that Taylor sold him out to Axe, and warns them that someday, Axe will turn on them. When that day comes, they will need Chuck’s help.

First, Chuck sells himself to Taylor as an ally, insisting that even though he’s no different than Axe (good for you for acknowledging it, Chucky!), he is in control of his monster (eh, jury’s out on that one). Second, he recommends that Taylor embrace their own monster, because it’s the only way to defeat Axe at his own game.

In the words of Billy Joel, “You may be right,” Chuck.