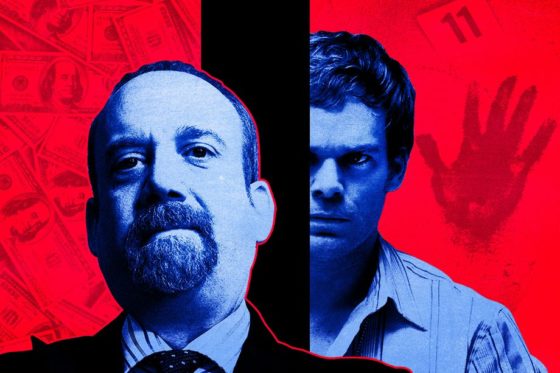 Ever since HBO’s Succession came into our lives, it’s seemed to exist in a symbiotic relationship with Showtime’s Billions. I can’t recommend one without the other. Both series aim to derive a lot of drama, comedy, and pathos from the misery inherent to succeeding the world of finance, power brokers, and the justice system. Billions might glamorize the 1-percent lifestyle a bit more than its HBO counterpart, but they both underscore that being rich is a soul-draining enterprise. And sometimes these shows do the same things on screen—like watching characters indulge in some ortolan.

In the second episode of Billions’ fifth season, we have another sort-of shared event. Just as Succession Season 2 did a riff on real-life conferences/pseudo-retreats for the wealthy, like Davos, “The Chris Rock Test” provided its own equivalent, an event hosted by Bobby Axelrod’s newest foe, the performatively woke billionaire Mike Prince. (The conference appears to be named after Mike, because humility is overrated.) Somehow, that wasn’t the most absurd thing that happened in the episode—you’ll find out why soon enough. Let’s not waste another minute and dive into this week’s Billions superlatives.

Here is the best, worst, and most from the second episode of Season 5

For what it’s worth, I’m sure he has a better flying record than Harrison Ford.

Biggest Failure to Read the Room

In the latest move of their shadow war, Axe has put his weight behind Manhattan District Attorney Mary Ann Gramm—using Chuck Rhoades’s willingness to go easy on some cohorts in last week’s crypto-mining fiasco against him. As a result, New York Governor “Buffalo” Bob Sweeney has decided that Gramm will preside over criminal referrals in the state, rather than Chuck. And this DA is pulling no punches.

“[New York state] elected you so they could feel good about their sex lives, and think of themselves as liberal and fair,” Gramm tells Chuck. “The people of Manhattan, however, elected me to punish predators—not slug shots of Dubonnet with them.” Chuck laughs and says “You sip Dubonnet,” falling into a completely avoidable trap for rich Yalies.

Chuck, buddy, now is not the time to show off your impressive knowledge of fancy aperitifs. Anyway, more on this Axe-Chuck proxy war development later.

As actor Kelly AuCoin told me ahead of the fifth season, what Dollar Bill finds attractive about fellow Axe Cap trader Bonnie is that she is, quote, “a female me.” Unfortunately for Dollar Bill, that isn’t always a good thing.

Right now, the Dollar Bill–Bonnie affair is in a rut—and it all comes down to Dollar Bill going through a slump at work. “I can’t get it up to fuck a non-earner,” Bonnie tells Wendy, the kind of statement so ridiculous it can only come out of the mouth of a character on Billions. One of Dollar Bill’s biggest issues, you see, is that he’s starting to feel like a trading dinosaur: the finance world is evolving, and Taylor Mason Capital “quants” are sucking up a lot of the dough through their algorithmic approach to, uh, the market’s money or whatever. (I don’t stonks.)

In a moment of desperation, Dollar Bill tries getting one of the quants—someone who, per my notes, has “serious incel energy”—to work their algorithm into his portfolio, but it backfires because Bill wants the gains to be bigger than the formula allows. “Let me translate for you: A man can manage two wives, but you try to keep four wives going, you can’t keep everyone satisfied,” Mafee says, trying to explain the problem to the man he fought in a boxing ring not too long ago. “Too many variables, not enough Bill; the whole thing crumbles.”

It’s been a rough start to the season for Dollar Bill. Even when Bonnie offers him a sympathy bone session in the minivan, he asks for a rain check because he wants “some alone time.” It’s weird—and frankly disturbing—to see Dollar Bill this sad and vulnerable. I hope our guy gets his mojo back; for his sake, for Bonnie’s, and especially for the two families he’s supporting.

Most Overt Showtime Sponcon

Even though his pledge to change and become a better person will not save his marriage to Wendy, Chuck is still working toward self-improvement—going so far as to meet with a therapist. (The therapist is played by the late actor Mark Blum, who died due to complications from coronavirus in March. Seeing Blum, who also appeared on Succession as the cheery former head of Waystar Royco’s cruise lines division, was a lovely and unexpected surprise.) Blum’s therapist asks Chuck to come up with a “wise person” for their session, and Chuck brings up the novel Darkly Dreaming Dexter, the inspiration for the series Dexter.

If it’s any consolation, Chuck isn’t looking up to a serial killer, just a serial killer’s strict moral code. Dexter Morgan adheres to a set of rules taught to him by his father Harry that guide his “dark passenger.” And while I can appreciate what Billions is trying to go for here, it does not appear coincidental that one Showtime show basically turns into sponcon for another. What’s next, Wags is caught smoking a bowl while watching Desus & Mero?

It would be one thing if “The Chris Rock Test” had just one scene in which Dexteris brought up, but Chuck just keeps the free Showtime publicity going—mentioning having to satiate his own “dark passenger” several times. I’m with Sacker on this one: 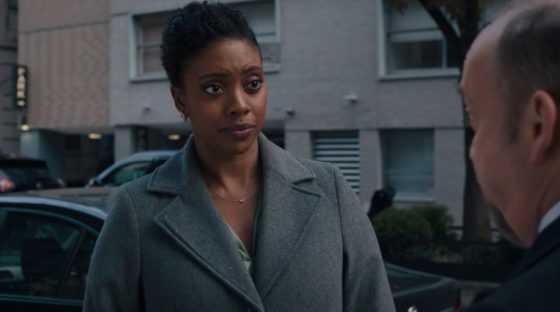 One of my favorite side characters on the deep Billions bench is Judge Adam DeGiulio (played by Rob Morrow), Chuck’s friend who strikes a perfect balance between sleaze and charm. This week, DeGiulio has his eyes set on a future seat in the Supreme Court—protect RBG?—but he’s run into a bit of a snag. A senator has found a memo that DeGiulio coauthored, in which he endorsed the use of torture—er, sorry, “enhanced interrogation.”

It would’ve been a lot easier to just sit in a conference room and watch The Report. This is precisely why Billions should be protected like the precious piece of art that it is.

Axe, Wags, and Taylor are in attendance at Mike Prince’s conference this year—looking for angles to make some more money, as always. But Mike is also excited by their presence because he can finally have a “fireside chat” with Axe to discuss a topic near and dear to his heart: Is it time for a new capitalism?

It’s a spirited exchange; Damian Lewis and Corey Stoll bring their A game and lay out their characters’ respective philosophies. Mike believes that he can be both a billionaire and a positive force for change—in his mind, being a capitalist and a good person aren’t mutually exclusive. Mike also irks Axe by poking holes in his self-made myth, pointing out that the “roads were paved” for him because he was born a straight white male in America. It is hilariously uncomfortable to see someone try to make Axe check his own privilege. 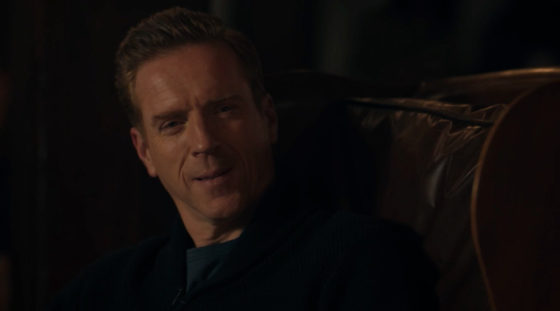 Axe has a more cynical view in mind. “I don’t pretend I’m an ordinary guy that got lucky,” he says, something that Mike feels about himself. “I am a monster: a carnivorous fucking monster. It was success or oblivion for me. Just as it was for you, whether you want to admit it here or not.” The debate simmers down after this, with Mike deflecting by comparing himself to a cuddly Monsters, Inc.monster and inviting Axe to help him with earthquake relief supplies the following morning.

Axe’s willingness to see the ugliness in himself isn’t exactly a great quality, but this theme should run throughout the season as he’s feuding with Mike. If I were to guess where things are headed, I feel confident that Axe is going to be proved right—exposing Mike as just as much of an opportunistic monster as he is, or at least driving him to a breaking point. Watch this space.

A good parenting tip: Don’t do what anybody does on Billions. The Rhoadeses and Axe either ignore their kids until they’re nearly hospitalized from getting too drunk at their grandpa’s wedding to his Native American mistress (I get it, Kevin Rhoades), or they’re shipped off to boarding school. Terrible as they are as parents, though, Wags might have them beat.

While trying to woo a Big Pharma guy at a strip club outside Mike’s conference, Wags gets thrown by “Brandi”—a performer who is actually named Mandy, and is his daughter. You hate to see it; our man has failed the Chris Rock Test.

Come to think of it, Billions has rarely addressed Wags’ personal life. How many kids does he have? What’s happened to the rest of them? How much does he pay in child support? I hope all these questions are answered in time, and I hope he reconciles things with Brandi—sorry, Mandy.

Axe’s big move at the conference was trying to corner the market on synthetic ayahuasca—the vision quest in the season premiere also opened his eyes to the power of a new emerging market. Unfortunately, he isn’t the only one who’s seen the light.

“You stole my shaman,” Axe says to Mike, an early contender for quote of the season. (The shaman’s name is Bram Longriver, which is also just incredible.) “I feel a deep spiritual debt to the man, but I nevertheless feel compelled to separate his dick from his balls,” Wags adds. God, I love this show.

Axe can be mad all he wants, but Mike was just doing good business. I just hope this isn’t the last we get of the Shaman Wars.

After losing his shaman, Axe is so fed up that he hatches a new idea: He wants to become a banker now. Why gamble at the casino, the thinking goes, when you can be the house? In hindsight, I’m surprised it took Billions this long to get to this point: Banks are the worst, and whenever they fuck up, they always get the support of our government. It’s a Billions character’s wet dream!