Designing His Own Philanthropy, Part 1

Part I of Lynda’s detailed survey into Damian’s generous heart. In case you missed Part II, it is here.

Lynda, one of Fan Fun With Damian Lewis’ first and constant supporters, has been a consultant working with charitable families, foundations and trusts throughout the U.S. for more than 25 years. We are extremely thrilled to have her as a guest blogger putting her expertise to work in a survey about our favorite actor’s philanthropic efforts. 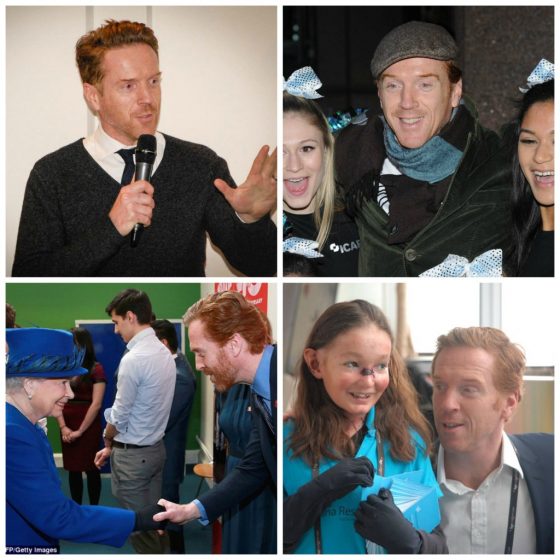 Philanthropy, a word derived from ancient Greek roots, means love of humanity. In modern terms, it is the act of promoting the welfare of others through charitable donations and charitable acts.

GIVE and GET are two critical commandments in the world of philanthropy.   Philanthropists GIVE their money plus their time, often rolling up their sleeves to undertake physical, onsite work days on behalf of a cause important to them, whether building a house or needed playground or making an educational film or counseling young aspiring entrepreneurs. It is impossible for any one person or one family to give to all of the worthwhile charities in the world. So, people have to ask themselves, “What issues or challenges are important to me and my family?” Strategic giving involves setting charitable priorities and selecting recipients wisely through vetting and paring down. Some philanthropists sponsor fundraising events – luncheons, banquets, galas, marathon runs – that “get” or encourage others to give. And public figures can also lend their celebrity to make meaningful contributions to charitable causes. In doing so, they can GET others to donate money, time and effort. In the case of Damian Lewis, he has mastered so many of these generous strategies.

We cannot speak to the sums of money that Damian Lewis and Helen McCrory have donated to charities in the U.K., the US and internationally. We can only assume that their pounds and dollars support the organizations to which they have given their time and for which they have solicited dollars and time from their friends, their fans, and the public. And, although I tried several times during my recent London trip to get Damian to tell us for this Fan Fun post about his charitable priorities and his family traditions of giving (to no avail on the mini-interview front, I’m sorry to say), we can look at the recipients of his generosity over the years to infer some of his philanthropic priorities. 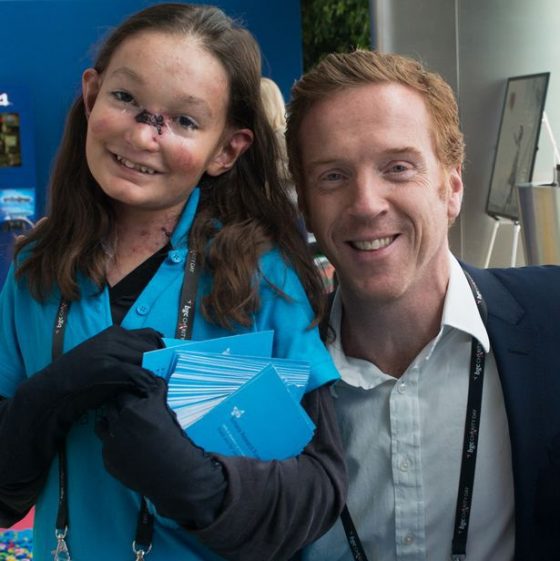 One prominent example, which we follow regularly on this blog, is how Damian has brought his celebrity – his visibility – to Sohana Research Fund. A “rare disease” needs the help of a celebrity to shine a light on the cause and to help raise funds for needed medical research and treatment. In February 2012, as a celebrity supporter of the Fund, Damian went to Number 10 Downing Street as part of ICAP Charity Day. Damian became a patron of the Sohana Fund in 2013. He explained:

“My children are at the school Sohana went to and we became good friends with her. I wanted to help so I became Patron of the Sohana Research Fund which raises money for stem cell research and gene therapy for kids with the condition.” (Mirror UK, February 22, 2015 updated)

Most recently, Damian named Sohana Collins as the living person he most admires.

In February 2015, Damian made a straightforward explanatory video about recessive dystrophic epidermolysis bullosa (RDEB or EB), interviewing leading research scientist Professor John McGrath of Kings College London. This informative video is found on the website of Sohana Research Fund and is used by the organization at its fundraising events.

Since 2013, Damian has repeatedly tweeted his support of the Fund and has taken the time to make multiple videos of support. Here’s one.

Celebrity challenges are an effective strategy for getting charitable donations from others (Remember the groundbreaking Ice Bucket Challenge to support the ALS Association? That challenge raised more than $115 million in donations to the Association.) Damian has joined in on some of that fundraising fun to benefit Sohana Research Fund. Sohana’s mother Sharmila explained:

“Recessive dystrophic epidermolysis bullosa is quite a mouthful and people have real trouble in saying it so we started by asking people to say that to raise awareness of the condition and then a funny tongue twister.”

So, when Sohana and her family issued a Twitter tongue twister challenge #EBtonguetwister in November 2014, Damian was highly visible as he challenged his celebrity friends and his fans to make videos of themselves reciting tongue twisters and also to make monetary contributions to this Fund.

“Damian’s involvement was key to making this work because he then nominated Benedict Cumberbatch and Sienna Miller and Damian’s wife Helen McCrory also did it. Other stars getting involved include Fay Ripley and Tom Hiddleston and now Benedict and Sienna have nominated Eddie Redmayne, Stephen Fry and Cara Delevingne and Tom has nominated Charlie Hunnam, Gemma Arterton and Dominic West.”

In 2016, Damian undertook the same kind of visible challenge solicitation for the “Stick out your Tongue to EB” campaign. Sohana’s mum explained that Sohana is unable to stick out her tongue because of the damage from the disease, so the challenge was for others to metaphorically stick out their tongue to the disease and to literally make and share a video to  challenge friends and fans to video themselves sticking out their tongues and to donate money to the Fund.

On February 28, 2017, Damian spoke passionately on behalf of Sohana Research Fund fundraising at a research update event held at the London Film Museum. And, in mid-April of this year, he participated in the Butterfly Brunch Club campaign, challenging his friends and fans as well as the general public to gather friends together and hold a fundraising brunch to support the Fund. 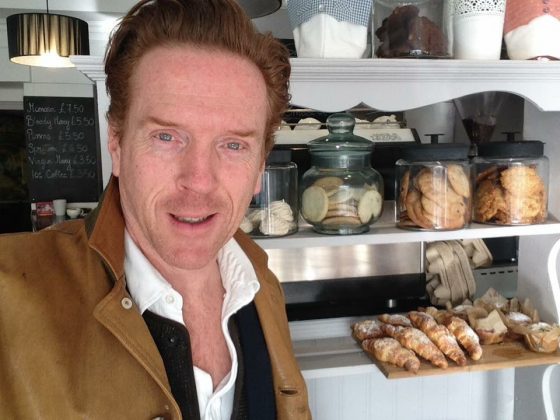 Damian has given his time to other charities that provide financial support for medical research and treatment. In November 2012, he sent out the following tweet to bring awareness to the cause of conquering prostate cancer. 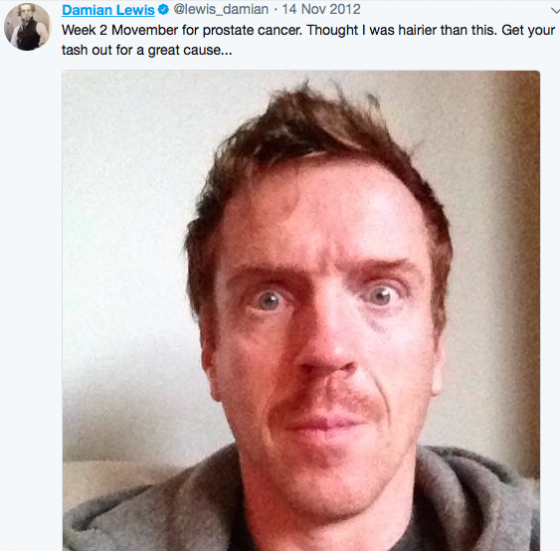 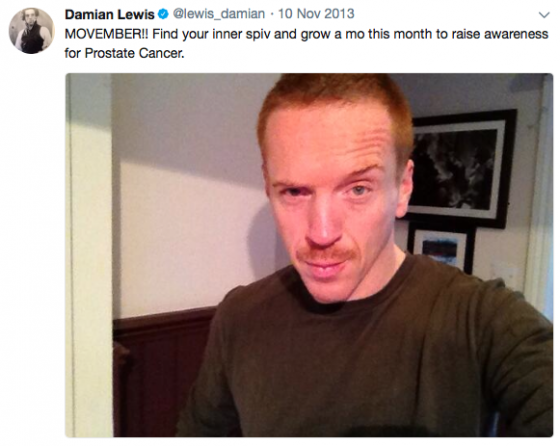 Later that month, he used his guest appearance on Late Night with Jimmy Fallon to put a spotlight on Movember, drawing attention to his newly grown mustache to encourage prostate cancer awareness. In January 2014, Damian was quoted on the Prostate Cancer UK website in support of Men United v. Prostate Cancer:

“I’m not yet 50 but one day I will be and that’s when a man’s risk of prostate cancer spikes. I’m joining Men United because it’s about hammering a disease which kills 10,000 men in the UK each year. Men United aims to tackle that.”

This charitable organization aims to bring visibility to fighting prostate cancer with the same vigor that women’s breast cancer charities have in recent decades provided resources for research, treatment, and early detection.

Damian was also a celebrity phone call “broker” on December 4, 2014 at the ICAP brokerage firm’s London site for the 22nd Annual ICAP Charity Day fundraiser. He rolled up his sleeves, and displayed his sense of humor, making brokerage (fundraising) calls from the trading desk floor and later entertaining the other workers with his Elvis impression. 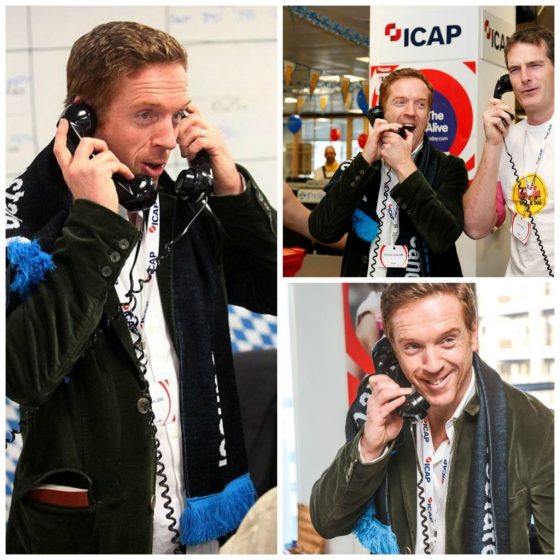 The way this event works is that each celebrity makes his or her brokerage calls alongside an actual ICAP broker, with 100% of trade revenues and commissions for that day donated to the celeb’s charity of choice. Costumes and shenanigans abound; for some laughs, be sure to look at www.icapcharityday.com and look especially for Damian in the 2014 photo gallery. Joined on that day by, among others, Prince Harry, Helen Mirren, Dominic West, and Jamie Oliver making calls for their charity choices, you can see Damian’s choice of charity. 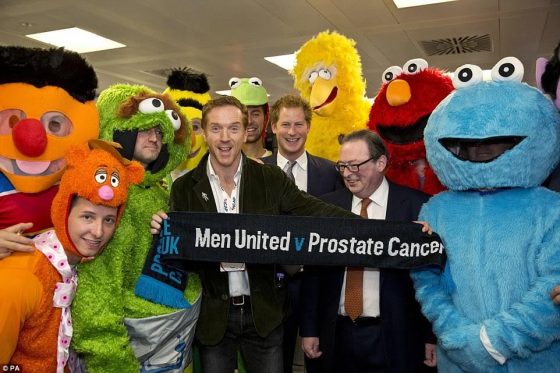 And, in February 2017, he and Helen tweeted their photo wearing symbolic Unity wristbands to bring awareness to World Cancer Day – Cancer Research UK. An Act of Unity Campaign. “Give money today to help find a cure for the horrible disease that is cancer #WorldCancerDay,” Damian tweeted. 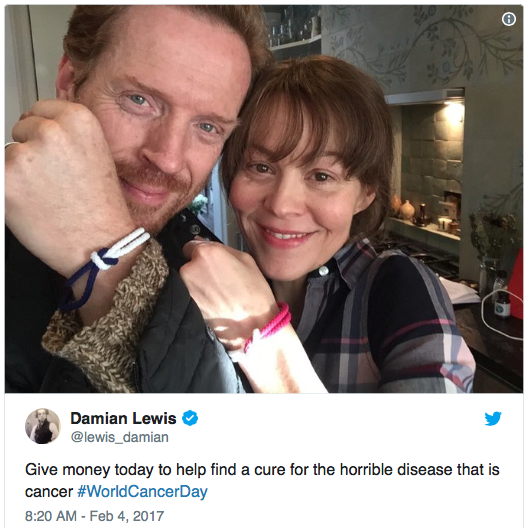