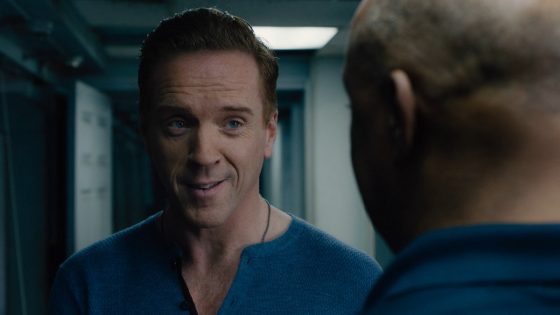 Billions Season 3, with “A Generation Too Late,” just got real dark, folks. Not the sort of dark that takes you weeping to a fetal position when it’s done, your poor heart bleeding from the pain of it. No, this episode is the kind of dark that makes you mad, even when you thought the madness had already reached its upper limit. I don’t mean the characters have become unrecognizably hateful and ugly and you want nothing more to do with them ever. Quite the contrary. This episode instead shows you how real breathing people in technicolor reality sometimes need to go monochromatic, all black and white, when those are the only colors left available to see the world. You feel sorry for them for losing their color a bit and you know it’ll come back eventually (it always does, it has to!) For this hour, though, it’s gone, baby, gone.

Lara signs divorce papers and the deed is done just like that. Remember I caught this glimpse of sad anger in Bobby’s face in one of the previews?

Maybe it was gif’ng it out of context, or the zooming or the color adjusting, but darned if I see any of that same emotion in the actual scene. Maybe that emotion landed on the cutting room floor, a display ultimately incongruous with the rest of the scene, or, more likely, it was wishful thinking that Bobby really cares. There was some emotion there, of course. A sort of resigned, yeah, this sucks, but whaddya gonna do?

In the actual scene, the flourescent lights in the conference room couldn’t be any harsher. “It happens”?  What happens Bobby? You forget about your life partner and the mother of your children the minute she becomes reluctant to sidecar along on your single-minded ride? I like to distinguish my recaps from all the others we get by the attention paid to the emotional truth of the moment. In this moment, there was little emotional truth to be had. Apparently, the marriage was nothing more than a deal gone bad, with Axe out not a nickel more than he anticipated he’d be. In fact, that’s all that really mattered in this transaction: the money of the thing. The scene may have served to bring some life back into Lara, maybe some lingering spark driving her to again play partner in crime to Bobby’s idea of hiding away a hefty chunk of the loot for them to live on. How that plays out is anyone’s guess. Even if these two end up back together…and I’m leaning towards thinking they will (who else they got?)… they may never grow as a couple or as humans beyond slurping up more of that caviar on pizza. Though nothing wrong with that, right?

As the Axelrods dissolve their union, Chuck’s former best friend, newly poor Ira, is intent to do the opposite. Seems he’s outgrown his Tinder-ing and wants to settle down, with someone he initially found on Tinder, right? Anyway, nothing wrong with that, either, gosh knows.

Surely I’m not the first to see the similarity between truffles and a part of the male anatomy? So, it’s something more than cringe-worthy to watch Ira watch slice after slice of his metaphorical left nut fall over buttery pasta for his fiance to fork around and probably ultimately leave half eaten (because who can eat that much truffle?). Also, what restaurant announces a price out loud like that? Tellement gauche! And tells you how much you just spent like it’s a contest on who spends the most?

Damian has said that he thinks up animals to go with the men he has to play. I’d venture to say that Bobby is several animals. When he’s hungry, he’s a jaguar. When he’s hunting, he’s a shark. When he’s ready to strike, he’s a viper. I like to look for faces we haven’t seen Damian do before. We’ve seen the steely gaze before, but in Bobby, it’s somewhat colder, not as overtly violent as other characters Damian has played, more glacial and determined, with not even a hint of fear. And notice the stance that thickens his neck, already thick from the times Damian said he spent building up Bobby at the gym, but even more so because of the stance. A viper about to strike is what it is.

We know that Bobby has found a nimble loophole around not being allowed to trade. In short, he’s got 2 billion of Axe Cap money, to give to whom he chooses, to trade in ways that he dictates, to benefit whomever he chooses. He is the money guy and the idea guy and the delegating guy, all while keeping his hands off the money, except for the bit that ends up his again. Illegal, maybe, but crazy brilliant too. He’s got Taylor on board and Wags, and, in this episode, he’s recruits the little fish from the hotrod place, Michael Panay, who we learn is about to lose it all and therefore has no choice but to bite.

So Panay will do the trades with the “orphaned 2 billion” and float above water with his apartment in the city, house in the Hamptons, and daughter’s horse.  Who will be on the other end of the trading? The police pension fund run by Bobby’s old friend retired police Raul Gomez. Raul has to be convinced too, though, since anything near Bobby is liable to get extra scrutiny. Not beyond Axe to use grilled meat as a sensory spark and anchor to a memory of laying down some money. For agreeing, Raul will take home a piece of Bobby’s earnings.