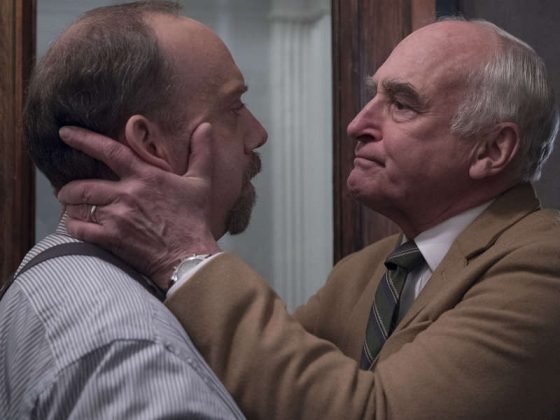 Hell of a Ride

Dust off your Harry Chapin albums, ditto Peter Gabriel’s “Solsbury Hill,” and get your dad feelings ready. This episode is the Charles and Chuck fathers-and-sons tour de force we’ve been waiting for. It’s done a LOT less hackily than these arcs often are (a well-timed flashforward helps set a good tone of ambiguity) and teaches us a whole lot about Chuck’s childhood, which … explains plenty. I was also glad to see Wendy get more work to do this week, she’d been a muted presence this season and Maggie Siff really got the opportunity to swing for the fences and put in a beautiful, moving performance.

Wendy usually spends way more time dealing with the strong negative emotions of others than she does with her own self-care, and here she must deal with the unexpected and tragic death of the man who Mad Men fans still think of as Bob Benson, but on Billions is Craig Heidecker, a cuter/nicer Elon Musk type and Wendy’s onetime lover during her separation from Chuck. His loss, in pursuit of space travel, guts Wendy, but also has a real impact on Taylor, who (sensibly) had placed a major bet against his chance of launching successfully. Obviously this cannot be the first time Taylor has realized that their work is not always aligned with the path of furthering human happiness and scientific advancement, but it definitely seems to be the first time they feel it with any acuity.

Taylor is questioning their status quo from different directions: In addition to the fatal launch, they’re also becoming increasingly irritated by Axe’s various attempts to work around them without letting them in on the machinations in question. It’s one thing to know that Axe needs to maintain boundaries in order to keep Taylor above suspicion as his new CIO, but another to be constantly presented with done deals they need to sign off on.

Wags, amusingly, is mainly occupied this week by a fun subplot revolving around his desire to spend his eternal rest in the last physical burial plot in Manhattan, and the ensuing hijinks required to wrestle it from the wealthy personal injury lawyer currently squatting on it. To be fair to Wags, who winds up absolutely destroying said lawyer’s life, he DID give the guy every chance to sell him the plot at a very fair rate.

Legacy, it seems, is the watchword consuming all of our characters this week. It’s (one of) the reasons Axe decides to get involved with the noisy venture capitalist hoping to shake up his fellow philanthropists (it’s Axe, so obviously he also stands to make a mint off of it), and it’s what Chuck needs to leverage to bring his father back into the fold.

Now we come to the heart of this episode, the aforementioned Rhoades v. Rhoades showdown. We open with Charles Sr. sitting down to talk turkey with Connerty and Dake, who have (grudgingly, on Dake’s part) offered him immunity from prosecution in exchange for selling out his son’s involvement in the Ice Juice maneuver. Axe has been moving the needle on that investigation rather handily, having the New Halls slide an affidavit by Ira under Connerty’s apartment door, which has him determined to sidestep Dake. Connerty has been pursuing these leads against Dake’s wishes – Dake, who is in it with Chuck, obviously just wants them to bring in a win against Bobby and move on with their lives – and it’s really making them butt heads in a big way. When he finally gets the go-ahead to offer Charles Sr. immunity, it’s a big, big deal.

So, will Charles Sr. hang his son out to dry, or not? Would he perjure himself over it? Chuck clearly has the same questions rattling around his brain, and his dad refuses to speak to him, so he opts for…