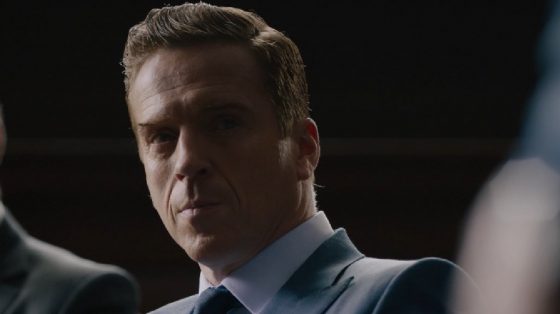 Like three delicately delicious birds, Wendy, Bobby, and Chuck are poised above the deep fryer in Billions Season 3, Episode 6, ‘The Third Ortolan.”

If Wendy had only waited to make the call to short Ice Juice once she was at a safe distance away from pinging the same cell tower pinged by Chuck’s office. Like maybe wait till you’ll on the sidewalk trying to get a cab, or, better yet, hop on the wifi at a Starbucks across town, and then make the call. One barely needs a friend at the NSA to trace such things.

Back when we were talking about which character will prove to be the flaw in the Death Star, who could’ve imagined it’d be Spyros? Not due to any sinister motive, mind you, but simply a misguided attempt to win one for the boss. And, lest there be doubt, Spyros did bring a win for Axe. All evidence points to Wendy having her cake (grabbing a seat for herself on the Axe Cap short) and eating it too (shorting a stock that her husband manipulated Axe into shorting, thereby leaving their joint marital account none the worse for wear). Forgetting that Wendy did it all blindly in a bold move of self and family preservation, the story could easily be framed as her working the play to the Rhoades’ advantage.

The proverbial doo-doo hits the proverbial turbines in this episode. We find that Axe Cap will still be liable for spiking the punch leading to the fall of the stock. And Chuck will still be liable for provocation. But since Wendy has one foot in both of those worlds, she’s screwed either way. We haven’t had enough of a trial to determine if Chuck’s provocation was indeed a crime. Now, we may not ever get there given where the one piece of physical evidence turns up at the end of this episode.

When Spyros brings the news of Wendy’s connection, you see perhaps a fleeting spark of the calculus within Spyros’ discovery crossing Bobby’s mind, maybe even a bit of pride that Spyros dug it all out. Or maybe only I saw that flicker? The point is moot though, because if that thought of pinning it all on Wendy ever existed in Bobby’s mind, it goes away as soon as it came. Axe will not only pitch Spyros out the window but take a leap himself rather than give up Wendy.

Recall him telling Lara last season “except for you and the kids, they’re all cannon fodder”? Also recall, if you will, he said that seconds before opening his eyes mid-kiss to pick up a text from Wendy. Wendy is decidedly not cannon fodder, then or now. We know it’s not conventional love between Wendy and Bobby. We know it’s clearly something more.

The focus he has, the instinct he needs to do what he does, come from his proximity to her. He needs Wendy to clear up the space within his head for him to be that person. When his own ego and narcissism is tripping him up, leaving him paralyzed at whatever intractable impasse, he needs her to clear the path. It’s a mystery, really, what this is. Because I don’t think we’ve ever seen it on TV before. Makes you wish Henry James would rise from the grave and pen a novel of what Bobby and Wendy are to each other. At least then we’d have it explored at the most granular level and explicated out with the fullness it deserves. But, alas, what we have is an entertaining mystery that some find pleasant (he’s a different person around her!) and some find frustrating (what the hell does she have on him?) I imagine the pleasantness and frustration exist in equal measure within us all!

All the quivering in their boots over delivering the bad news to her, I don’t know, seemed sort of overwrought though, no? I mean, if, say, Dollar Bill had been similarly implicated, would Wags have wished Bobby “Godspeed” and would Bobby have been so fearfully driven to slow-motion to give him the news.

Or Taylor? Would the boys have been as afraid of hurting Taylor as they are of hurting Wendy? True that the pain to be delivered is worse because everyone knows the fact of Wendy’s husband puts her in a no-win situation. Still, I couldn’t help but think the show was devolving, just for a bit, into the madonna/whore thing so much of media does to women. Either she’s a saint worthy of constant deference, someone to be worshipped and tiptoed around, or she’s the polar opposite, a gold digger available to be played like a fiddle and used on a whim. Hate to think such a thing of this show and such a character as Wendy, so best reserve judgment till we see the thing play out. Just in case it needs to be said, Wendy is neither madonna nor whore.

Bobby gives her the news and we get a beautiful moment of choked up horror when Wendy wonders if he was the one who sold her out. Then, his gentle earnest denial. She waits a beat, scanning for truth, finds it in his face and voice, and breathes. Then goes home.

Meanwhile, Jack Foley has been prepping Chuck for the contest for governor, doing some fluffing for the horse races ahead over pig ears at The Spotted Pig. (leaving me to wonder if goat ears are as good?) Foley needs to speak to the wife too, because such things always count in public perception, even more so given who she works for. Fortuitously, when they have that meeting, Wendy gets some good advice in the form of a Zen koan. She concludes the only way to manage an unmanageable situation is to bring it all to the table. Break that pesky stick keeping Chuck and Axe at opposite sides.

Must touch a bit on the court room drama, if for nothing else than to remark on how perfect a fit the likes of Rob Morrow are for this show. His signature delivery fits the words impeccably. That the actual court session seems to be a work of fiction is besides the point. I mean, are prosecutor’s obligated to reveal their evidence before trial even starts? It’s up to the prosecutor to know if they have enough to go to trial, no? Not the judge, right? Or maybe all my Law and Order watching never dealt with motions to dismiss. Which is what this is. Bobby, via Bach, is pleading that he’s been wrongfully prevented from doing his life’s work. (It’s a witch hunt!) And for what, where’s the evidence? Judge DeGiulio wonders the same.

Then, we learn that Connerty likes the folk harmonies of the Clancy Brothers while Judge DeGiulio prefers the funk. He gives Connerty a week to come up with some real juice on Ice Juice.

You can’t fake the funk.

Before getting the big reveal that she’s been revealed, Wendy touches base with Taylor to suss out how they are dealing with the possibility that Axe might go to jail. She warns:

It’ll be about mutation. The capital will need to be managed. The people here are the right ones to do it, but can it thrive, grow…if Axe goes to jail?

Then she gives Taylor a treatise on intuition, the purity of acting totally on your gut with full confidence. Wendy warns Taylor the leverage afforded by Axe’s killer instincts will be gone from the company if Taylor doesn’t take up the slack.

Think of your gut as the deepest part of you… [Axe does] If you want to be at his level, in the purest way, the most profound, then, you must too.

Identify it, separate it from your fears, hopes, the other voices in your head…if you don’t cultivate instinct and listen to it, you’re fucking doomed.

Not a surprise that hearing such a thing makes Taylor more nervous than they started. Glorious intuitive focus can be a great thing, when you’re right and it works. What does it become when you’re not right and it doesn’t work? Bull-headed impulsiveness. Taking flying leaps on gut alone has gotten many a person in trouble. Heck, such a skill hasn’t always worked in Axe’s favor either. And that’s not Taylor. Something tells us that Taylor knows that “cultivating instinct” comes from doing the work, collecting the data, hearing all sides of the information, absorbing it all with an open mind and heart. Only then, once the work is done, is a gut worth a darn.

This speech of Wendy’s wasn’t really about Taylor though. It was about showing us what Wendy sees in Axe. What draws her to him and keeps her there. She sees a purity of will unlike any other. Like he’s a sainted monk, and his people, including Taylor, are his adoring acolytes. Does Wendy include herself in the congregation? Possibly not, but, hard to tell when she says things like she did in this scene.