Puppet Masters Walk Free, While Puppets Walk Away with the Phantom Pain of Having a Hand Up Their Ass 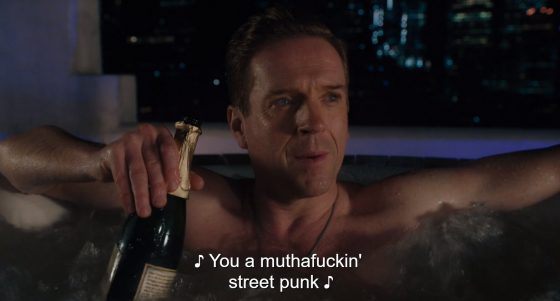 Billions, Season 3 Episode 7, “Not You, Mr. Dake”, starts where the last episode ended. We find Bobby, Wendy and Chuck where we left them, holed up in Bobby’s digs, mapping their next move. We see that dinner came and went while they were getting their stories straight.  What’s a strategy session without a nicely prepared steak as accompaniment? And once you share a meal, you’re friends, right? Thus, we witness the shift in tone, the “nuanced shifts in loyalty” as our central three, who I borrowed Swift-ian lyrics to define as the A-team, the endgame, the first string, in that Last Supper promo, have transformed into a beautiful “trifecta of chicanery.” Leave it to the boys to want to keep Wendy out of the loop on the muddier parts of their plans. When her mind goes in exactly the same direction as there’s did, ie the need to throw someone into the deep fryer in their place, they’re amused. There’s a sense of “Oh, that wise wacky Wendy making fools out of us dumb boys yet again. Is there anything she can’t do? Is there anything she doesn’t know?” This start hints at the situation comedy to come later.

There’s strategery all over the place and righteous indignation against fresh new targets.

Get a load of Chuck taking umbrage over Dr. Gilbert taking Axe’s money while still betraying him. Could it be that the most offensive to Chuck is not breaking the law but disloyalty? Yet another thing he has in common with Bobby: loyalty above all else. How Chuck’s righteousness has flipped! He may actually admire Bobby’s ability to never sink into hypocrisy, his ability to always “tell it like it is”. Traits not shared by the good doctor, who does indeed play both sides of the fence. That the doctor’s play was for the sake of his family and research funding falls completely away. Chuck paints him as a henchman for the mob (aka Axe Cap), the man who withheld treatment from dying Donnie, the man who took money from Axe while slipping evidence to his enemy. A quisling, if you will. Clever twist of fate for the good Doctor Gilbert. Before we know it, funds are transferred, investment accounts are created and revealed and the doctor ends in tears. He’s got five years in jail and a tidy sum waiting for him when he gets out. In some circles of tit for tat, that’s plenty.

Dake is similarly screwed. First, he gets screwed from his guy who he installed in his old job at Southern to keep an eye on Chuck. That guy gladly takes the scotch offered him while telling Dake “Well Chuck probably knows you put me there to keep an eye on him, so me telling you what I’ve seen by keeping an eye on him will be us doing exactly what Chuck expects.” Heh.

The second screw comes from Chuck, who, you will recall, got Dake to take the Ice Juice case to Eastern, far away from any danger of conflict of interest had it been tried in Southern. Chuck got Dake to follow thru on what he started with the take-down of Axe, and then proceeded to take Dake down instead. That sounds like a chess move that probably has a name. Or maybe an ice hockey move, where your hockey stick is aiming for one guy, but then hits the guy who’s protecting you from that other guy. Chuck is like “Oops, sorry, don’t worry, you’ll be back” just as we see Dake’s back returning down south. Yep, NYC will eat you alive, son.

Puppet masters Chuck and Bobby walk free. Puppets, Dr. Gilbert and Dake, in addition to suffering the indignity of a hand up their ass, do not. They’re gaslit into thinking they asked for it and sent to pasture with the empty promise that they’ll live to fight another day.

The masters land winners, though not necessarily any better for the ride. Chuck sums it up nicely:

Beat up, older, like the wins cost much more.

Which makes this episode even darker than that dark one. Simply because the dark hides under some darn silly shenanigans.

Only two players in this game end up relatively unscathed, not winners by any stretch, but still whole and clean: Taylor and Connerty. Taylor kept careful watch as the entire thing played out. They saw that Mafee was in extremis and identified Wendy as both a culprit of the stress and as someone who could help. Taylor came thru for the guy who hired them: that’s loyalty.

Similarly, Connerty now has Chuck’s number, is coming back to Southern, and will put forth every effort to nab his one-time boss who is now so readily given to corruption. Connerty is loyal to nothing but the truth the whole truth, so help him God. He’s a bit too clean to land on top of the heap at the end and may even die trying. I mean die in the woo-woo spiritual sense. Regardless, the triumvirate still have these two hurdles, Taylor and Connerty, to clear before they’re really home free, if ever.

So, yeah, the puppet masters win by screwing the puppets. What they do with Mafee is more of a poke in comparison, but poke they do, via the third member of the puppetry troupe, Wendy.

Taylor instills the idea that Wendy can make a difference. And she does. But, I’m sure I’m not the only one a bit miffed the show had Wendy sell herself short all to cover for her ill-timed short.  (Forgive me, sometimes I cannot NOT throw puns at this show) Really, Dr. Rhoades? Man-child Mafee, in a fit of nerves, clumsily lets out the fact that his gaze often follows your ass when you walk around the office and that leads you to conclude he like “likes” you?

Just because a man’s eyes go to your butt (or your boobs) doesn’t mean he “likes” you. It just means he’s a cis-het man. Why be coy about it?

I’m not talking about leering or cat-calling, which, I think everyone can agree, are gross and abusive. No, this is something kinda okay, even in modern sexual climates. It’s a truth universally acknowledged that women within a certain age range and threshold for appearance will get the oh-so-subtle boob scans. Likewise, a cis-het man hunched over something really interesting at the cafe will reflexively look up a bit when a woman in spandex walks out the door. We’ve all seen it. Nothing to be ashamed of really. It’s like that hammer the doctor strikes to your knee making your leg go schwing before you even know what the heck he’s doing. Pure reflex. Doesn’t mean a darn thing more than that. It happens, that is, until a woman has crossed over to that glorious Age of Invisibility, the time in her life when no one ever sees her at all. (It is then, friends, that the tables are turned and the gawk-ee becomes the gawker *evil laugh*… oh, time, how nonsensical you are)

The fact we even have to imagine this cognitive disconnect in the knowledgeable and emotionally mature power player in a man’s world that is Wendy Rhoades is bizarre. Wendy really thinks Mafee likes her? Worse still, we’re supposed to believe Wendy thinks that Mafee likes her? To be fair, it was likely all a big joke that I just took too seriously.

The Halls’ and Orrin’s simultaneous nods of “Ah!” and Wags summarizing the play as “the oldest trick in the book” eased the blow somewhat. But the laugh came out bitter. Alas who the hell am I to be offended by the depths they had Wendy sink to? Also, did I really write last time that Bobby and Wendy were a relationship fit for the forensic pen of Henry James?Really? Who even reads Henry James outside English 307? I read him once, some thirty years ago, and just because it was an experience that made lovely creases in my brain where there were none before doesn’t mean the name means a hill of beans to anyone anymore. Particularly not the demographic for this show (or any show). Nor the lead characters of this night time soap bordering on sit com as it did in this episode. Nothing wrong with either of those genres mind you! As one of our faithful readers NotLinda noted, Billions is more iike a game or a puzzle than it is a story. And games are fun, yo.

I could go on about how they broke character continuity by having Wendy play the coquet. But, let me back it up and try to maintain a sense of humor. And it was funny, which was the main intention anyway. Her come hither sighs and laying her head on Mafee’s shoulder were meant to be funny. To his credit, Mafee remained adorably confused the entire time.