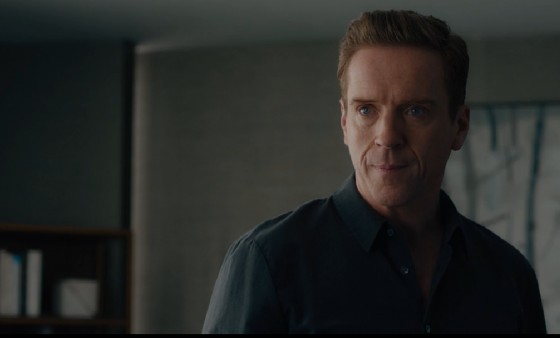 First question when we got the title for Billions, Season 3, Episode 8, “All the Wilburys”:  what, not just the traveling ones? Seems the Wilburys are a clever in group and the goal of this episode, now that our glorious Three are out free and clear is to delineate who among the satellites is out and who is in.

Foley and Senior catch Wendy and Junior in flagrante delicto engaging in the “childish enthusiasms” of their married sexual behavior. This gives them ammo for 1) displaying the fact they can access anything and 2) getting Chuck to commit to the work of becoming Governor by resigning his position as U.S. Attorney. Jack Foley says:

Consider it an object lesson… People learn much better when heightened emotions accompany the instruction.

Chuck and Wendy go home and put the coffee on and have a long hard talk about it. Wendy’s advice to Chuck is do it if you want to, not because the “two old men” want you to.

Chuck calls her out in her guilt over what they did to get to this point. He invokes Macbeth:

Blood will have blood.

Then tells her to get over it and get to the task at hand. Wendy then implores Chuck to reverse the power dynamic with Foley, to not allow him this power.

Foley’s hurt a lot of people, find one, use one, get back on top.

Newly freed Axe leaps home to the firm to be greeted by a pep rally set to that Ozzy Osbourne voice that has the quality of transferring to the listener’s own throat. Also, lots of rah-rah high fives, woo-hoos and guttural grunts. Spyros breaks the spell by throwing some Whitman at the crew, most likely Whitman via Dead Poet’s Society. The awkwardness of the scene is groan-worthy. Bobby’s ready to jump back into the thick of it, wants to immediately run up the capital investment, go deep with investors’ money, confident in coming up strong. He doesn’t care to examine the positions gained in his absence. Taylor is hesitant, saying investors will still have questions about the trial, about trusting Axe again with their capital. Wendy, distracted by her own troubles and requesting the use of The Halls to deal with it, expresses trepidation too.

This is not then.

For some reason, Axe takes a meeting with Krakow (who he has so lovingly aliased as the name of the tallest player to ever play in the NBA in his phone contacts). Recall, Krakow of the poker table tiffs from last season has this season been crowned Secretary of Treasury and has sent Axe Armand de Brignac to celebrate his freedom. Krakow’s “proximity to the FERC” gives him first-hand knowledge of the ins and outs of EPA regulations. He wants Axe to trade on information he has within the gov, from his offshore accounts. The tip? The EPA is about to rescind a regulation that will bring natural gas prices back up.

Chuck finds some gubernatorial bolstering from Foley’s man in Albany.  Scolari tells Chuck he’s got downstate, but he needs Buffalo, which is the territory of a mayor who Chuck outed as a homophobe last season. Since Chuck got the dirt on Mayor Sweeney, he knows the mayor is primed to help find dirt on Foley.

From one traveling man to another.

Axe and Wags gang up on Spyros and fire him. He’s not a Wilbury. The writers of this show are those guys in High Fidelity, music geeks perpetually hunched over vinyl. There’s a clever comic bit about who can be a Wilbury, and who cannot leaving me wondering: Did Richard Dreyfus really want to be a traveling Wilbury?

This scene made me think of a diagram, which I remember a friend sharing on Facebook a while ago. Pretty darn accurate. Wags, Bobby, and Dollar Bill are the cool kids, but they’re also the geeks, which at some glorious point in life becomes the same thing. Spyros, on the other hand, is clearly a dork. As he’s being dragged away, Spyros laments that he’s all the Wilbury’s put together, and damn if he isn’t this season if not at Axe Capital then certainly for those of us at home who chuckle (sometimes uncomfortably) at his antics. We see that Spyros’ dorky obsession may be coffee. When he’s packing away his stuff, among the pile of clearly coffee table books about coffee is a paperback, which I thought may be something else, but on closer examination, is yet another book about coffee: Uncommon Grounds .

Spyros also wants to give Dollar Bill a tip before leaving. Some “Clarence Beeks shit.” Beeks was the insider trader for the two old rich guys (the Statler and Waldorf of the movie to throw my own reference into the mix) of Trading Places. Must confess the indica kicked in like thirty minutes after finding seats in the theater the night I watched that movie. Fell asleep long before Clarence Beeks made an impression. This one 11 second clip is admittedly pretty awesome.

As Spyros leaves, Dollar Bill can’t help himself. This show with the elevator drama. Hoping the elevator thing is on purpose and not something you only notice like 9 months after the thing you made is already in the can. Maybe they’ll do a self-reflexive thing with elevator doors closing on some crucial moment later in the season. One can hope. Raising a hand for the stalwart few of us who will get the joke.

Spyros’ tip? A list of companies under investigation by the SEC who haven’t disclosed their status to shareholders, ie insider info on companies about to crash for Bill to short and those that are strong enough to beat the feds for him to go long.

Chuck finds dirt on Foley alright. His dealings in inferior steel complete with thick briefcases changing hands in hotel rooms. Gotta say that Old Money Foley going down smarts a bit. Aren’t guys like Foley the “good” rich people? Old establishment money flowing generously to cultural pursuits and other worthy causes. Not in this show. Call it a stretch, but this bit of plot development brought to mind the cynical idea that maybe the entire industry of creating sub-par goods is to give that cushion of lucre to the guys who buy and upsell. Otherwise, why create inferior product? Product that you know won’t pass any quality test? Because quality tests are rigged for this very purpose: To sign off on the crap so that some guy can sell it at prime price, give you a kick back, and keep the bulk of his earnings from it. Fun fact: such is the way a lot of third world markets work…in so called “banana republics” where quality counts for nothing so much as what someone can make a buck off of. Is this show telling us that old establishment money is sustained by such corruption? Maybe it is. Barely makes a difference anymore what’s old and what’s new, when all is sustained by grift.

Just as Chuck has gained the upper hand on remaining free of Foley’s puppet strings, he gets another message from Judge DeGiulio. The good judge needs Chuck to stay put as a US Attorney in order to grease the wheels of his own bid to the Supreme Court. Chuck doesn’t say no but warns:

There are twists and turns to the Supreme Court, highway men that may jump you at any time.

Then Chuck seeks counsel from his wife. Seeing Wendy and Chuck together, the looks they share, rolling eyes at the same stuff, fighting for the same stuff, rings so true to life. Her keen appraisal in the advice she gives him, what she sees as his strengths, things he knows, but sometimes loses sight of, show that they are a true pair, shoring each other up through whatever comes their way. Maybe the Rhoades are the real Bonnie and Clyde, because I can’t recall such mutual understanding ever existing in the Axelrod marriage. Maybe it was there, but certainly not as deeply felt as it is in these scenes between the Rhoades. Maybe, the reason Bobby never went to Lara with his concerns and troubles was that, unlike Wendy with Chuck, Lara had absolutely nothing to say.

Back at the office, Axe goes to Wendy incredulous that the feeling of winning doesn’t last for more than a day. This guy.

Bobby is facing residual damage with his kids, particularly Gordie who seems sensitive to the rift between his parents. There’s a brief flicker of Bobby’s pain at seeing his kid in pain, but blink and you might miss it.

Wendy tells Bobby scar tissue is not stronger, it’s just rougher, and that surgery can lead to its own set of complications. The surgery the trio just performed on their respective careers will no doubt lead to more complications later on too. Color me glad the dick-wagging stopped long enough to recognize this truth. They help each other come to terms with what they’ve done.

Barely registers as bad, the world I come from.

Then Axe turns tables and give his own bit of advice to Wendy, a keeper for Wendy’s book of wisdoms (no worries, I’m keeping a record). The advice: Keep feeling bad for being bad, wallow in the weakness as long as necessary but know that you are more powerful for having experienced it. Then, when you put yourself back in charge, that is when you’ll feel better.