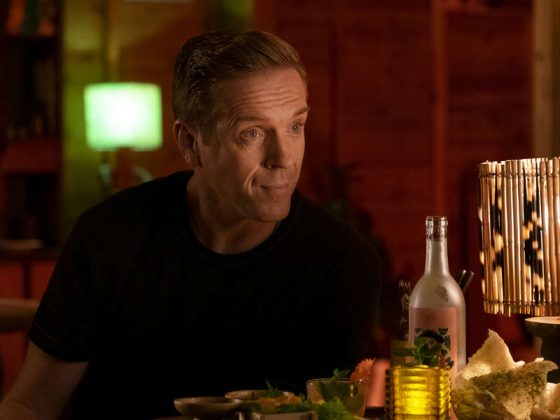 Showtime’s hit series “Billions” returns March 17 for its fourth season at its new time of 9 p.m. and opens with a sticky (yet irresistible) dramatic conundrum: At the end of last season, a few too many loyal Axe Capital employees had morphed into enemies and competitors — and hundreds of millions and, yes, billions of dollars are now at stake.

If the first four episodes are harbingers of the rest of the season, Season 4 — in addition to delivering the classic “Billions” drama of high-stakes wheeling and dealing — is going to be more fun than ever. In this season, for example, we get to see Chuck Rhoades (New Haven’s own Paul Giamatti) chair dance and (sort of) moonwalk, and we watch gender non-binary Taylor Mason (Asia Kate Dillon) strut in a short black dress, long black wig and heels (Wags (David Costabile) opines: “Kate Jackson hot”).

In addition, we get to hear “Dollar” Bill Stearn (Kelly AuCoin) sing Springsteen and we can’t help but wonder why he’s carrying around a chicken in a bowling bag. Plus, we get lines like “Your margins are thinner than Kate Moss on a juice fast.” And there’s a very funny sequence in the first episode in which Chuck walks all over Manhattan making deals in an attempt to get a gun permit for a big shot his father thinks is important. While doing so, he tries to leverage a New York City “Park Anywhere Permit,” which, to his chagrin, the high-powered players he talks to already possess.

Mason was the closest Bobby Axelrod (Damian Lewis) had to a rightful heir. Mason was mega-smart, ambitious and obviously capable of running Axe Capital, as proven when Bobby was under indictment and banned from trading. But Season 3 ended with Bobby desiring Taylor’s “total destruction.” He explained: “Not out of anger. But if it becomes clear that I can be taken advantage of, that I can groom you, bring you along, prop you up, then lose you and a serious chunk of business, too…”

Wendy’s in her element at Axe Capital; Wags is…well, Wags. And there’s a new guy named Tuk (Dhruv Maheshwari), who is so intimidated by Axe he has to whisper what he wants to say to Ben Kim (Daniel Isaac) to relay to Axe.

There are also references to the TV shows “Charlie’s Angels,” “Game of Thrones” (Showtime let them plug an HBO show?) and “Happy Days” (Fonzie, of course).

And the music? The show has always been known for its stellar taste in music and this season is no exception, with references to and music by the Beatles, Stealer’s Wheel singer/songwriter Gerry Rafferty and his song “Baker Street,” Chris Stapleton and his song “Tennessee Whiskey,” Al Green, Chaka Khan, Kid Rock, “Brick House” by the Commodores, Steely Dan, Huey Lewis, Kevin Gates and his song “John Gotti” and Bruce Springsteen’s song “Atlantic City.” Plus, there’s a performance by New Haven product Michael Bolton.

Read the rest of the original article at New Haven Register