It’s a Fresh Start, and the Same Old Enemies, for Chuck and Axe 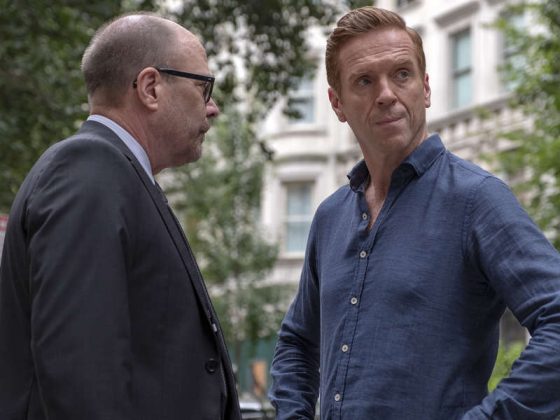 The fourth season of Billions begins with a very familiar image: Wags in a club, flanked by women, snorting coke. Apparently, he’s on a mission to secure a deal for a sovereign wealth fund, and as always, that means partying hard until the deal is done. Things seem to be looking good. Wags tells the man he’s meeting with that their final stipulation is that the client does no business with Taylor Mason. The man seems to agree, telling Wags that they can bring the party back to the Embassy of the Arab State of Qadir, where he’ll get to seal the deal with the Shiekh. Things don’t go as planned though. Rather than get a big meeting, Wags gets drugged and thrown into a dingy storage closet.

The episode flashes back to 27 hours earlier, allowing us to see how Wags got into this mess and what it all means. Back at Axe Capital, Axe is changing things up. His new business philosophy is that everyone shares tips and information, and he has new non-compete clauses for everyone to sign so that they don’t end up working for Taylor like Mafee did. Axe fires a guy for not adhering to the new rules, and Wendy backs him up. This is a new, tight ship. Axe isn’t just looking to thrive, he’s looking to drown Taylor Mason Capital at the same time.

But what about Chuck? What’s he up to now that he’s been fired as U.S. Attorney General? Well, he’s now a power broker that does favors for the rich and powerful. He meets with a man who wants to get a carry and conceal permit in New York, something that just doesn’t happen unless you’re formerly of the NYPD or FBI. When Chuck offers him a “park anywhere” pass instead—which is the beginning of a great running gag that pays off in spades by the end of the episode—the man balks at Chuck’s apparent lack of influence.

As Bryan gets sworn in as the new U.S. Attorney, ready to do the bidding of Jock Jeffcoat, Chuck is told that all of his cases will be coming under review. It’s clear early on that this episode, and perhaps much of this season, will be about the way power can fluctuate, and the way decisions have consequences that reverberate. As Chuck Sr. lays out, his son’s willingness to give up on the conceal and carry permit will tarnish his reputation. Along with Bryan looking into his old cases, there’s a good chance that if Chuck doesn’t act fast, he’ll be seen as a guy out of touch with New York’s elite, unable to use his connections to get jobs done.

That sets Chuck on an incredibly entertaining path to secure that conceal and carry permit. He goes to the Commissioner first, simply asking for the permit, but the Commissioner has no time for a man with no more power or influence. So, Chuck pivots and meets up with a man named Mr. Izan, who he believes can introduce him to Ambassador Suarez. He says he can, but that in return he needs tickets to a synagogue choir that his ex-wife’s new boyfriend is blocking him from attending. Chuck once again offers up the parking pass instead, but Izan doesn’t want it.

Luckily, Chuck knows a guy with choir tickets. But that guy wants early slope access, known as “first tracks,” at a fancy ski resort for the whole season. Again, this guy won’t accept the park anywhere pass, and Chuck is forced to pivot once again. This feels like Chuck starting from scratch, chasing down one lead after another until he can get the deal done. Eventually, Axe uses Wendy to get first tracks from Steven Birch and then finds his way into a meeting with the ambassador when his assistant turns out to desperately need a park anywhere pass (finally!) after securing the choir tickets by delivering the first tracks (got all that?). He fixes a problem for the ambassador’s stepson—it’s a bit of morally shady business, getting Axe to help him move the site of a new school so that the ambassador’s sex offender stepson can still live in the area—and that allows him to call in a favor that he can use with the Commissioner, involving faking the age of a Little League pitcher.

The whole plot is classic Billions. It’s twisty and unpredictable and populated with some truly outrageous characters. At the end of the episode, Chuck has found his way back into the orbit of the elite, drinking with the Commissioner while Bryan looks on in disgust. But what about Axe? Is he able to gain back some of his power? It’s hard to say. On the one hand, he’s back in business. On the other hand, he’s so consumed with destroying Taylor that he might be losing focus. He spends most of the episode either bribing people to stay away from Taylor Mason Capital, including the headhunter in charge of hiring for the firm, or chasing down a meeting with the Shiekh, especially once it’s become clear that they’ve kidnapped Wags.