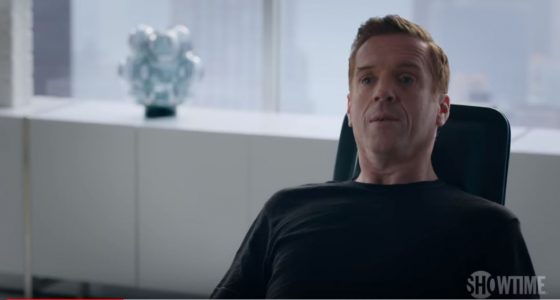 The structure of last week’s season premiere forced Wendy and Taylor slightly off to the sidelines, but, thankfully, this is not the case in “Arousal Template.” This episode features standard-fare plotting for our two alpha males, none of it necessitating detailed analysis: Axe is still scheming to take down Taylor; Chuck is still scheming to reenter politics, this time as New York State Attorney General. Axe has a new love/business interest, venture capitalist Rebecca Cantu (Nina Arianda), and Chuck is “tasked” by Commissioner Sansome in order to secure the NYPD’s endorsement for his AG bid.

Meanwhile, Wendy is silently grappling with her own long-dormant needs, and Taylor is discreetly maneuvering a genius play behind the scenes. (Juxtaposing a raucous Axe Cap party with a solitary Taylor doing tai chi was an excellent metaphor for the whole episode.)

Taylor is fully aware that Mason Capital is suffering from Axe’s squeeze: Their headhunter was paid off to keep decent applicants at bay, and now all banks are refusing them leverage at Axe’s command. This leaves Taylor completely dependent on Grigor Andolov, who swoops in like a terrifying Mighty Mouse with this proposal: allow his “friends,” a pair of brothers straight out of Russian mobster central casting, to provide the leverage Taylor needs.

Only two episodes into the season, and already I am way more interested in Taylor outwitting Andolov than anything to do with Chuck or Axe. Mainly because Taylor is coming at this with limited allies and a discernible amount of fear: They keep their emotions repressed during interactions with Andolov, but just before Taylor leaves for the episode-concluding showdown, their eyes belie their steel façade. I feel that was an important note for Asia Kate Dillon to hit, because Taylor is one of the few characters on Billions that still has a discernible soul.

Taylor is up against a wall with their Russian oligarch patron. Saying no is not an option — and neither is saying yes, because it would turn Taylor into Andolov’s puppet. But by engaging in a sneaky chess maneuver, Taylor masterfully orchestrates a ruse ensuring Andolov’s buddies have no money to give for Mason Capital’s leverage in the first place.

They do so by playing mind games with one of the bank representatives that turned them down — and Axe, by extension. Awesomely referencing this famous scene from Pretty Woman, Taylor announces to the bank rep that they have all the leverage they need. This causes the panicked rep to call Axe, and together they figure out the capital is coming from Russian Stereotypes No. 1 and No. 2. And whaddaya know? No. 1 and No. 2’s money just happens to be tied up in that very bank! Axe then unwittingly helpsTaylor by ordering the rep to pull back the brothers’ loans. Ruh-roh! Now Andolov’s goons have no money to give Mason Capital.

That night, Taylor meets Andolov at a dark piano bar, and lays a new deal on the table. They know that Andolov is using Axe’s freeze on the banks to his advantage, “because it makes me more reliant on you.” Some Kid Rock lyrics are spoken, illustrating both Taylor’s refusal to be intimidated by Andolov’s tactics, and their demands: Andolov will open the banks up to Mason Capital again. He agrees, quoting Bob Ritchie and my own reaction: “Only God knows why.”

Now, I loved watching Taylor outsmart everyone in this episode, but given that it’s only the beginning of the season, this kind of a major victory so early on makes me wary — and intrigued — for what’s to come next.

As for Wendy, her screen-time continues to be of the subplot variety. However, I found her storyline to be much juicier than the one where her husband debates throwing corrupt ex-cop Raul Gomez (Ruben Santiago-Hudson) or corrupt investor Michael Panay (Hari Dhillon) under the bus.

“Arousal Template” gets its title from Wendy’s realization that a shift has occurred in her sexual relationship with Chuck: When she finds herself initiating vanilla sex one night, Chuck still pleads with her to let him “get the box,” even though their BDSM-less encounter “is working for [her].” We then cut to a sad postcoital scene: Paraphernalia strewn about, Chuck fast asleep, and Wendy curled up in a ball, clearly despondent that her husband only gets off on Wendy the domme, and not on Wendy, his wife.

The other woman is Bonnie (Sarah Stiles), whom Wendy bonded with at an Axe Cap employee’s birthday party the night before. Bonnie is no fool, quickly inferring that their “session” is for Wendy’s benefit. Wendy asks pointed questions, such as whether the hard-ass-at-work Bonnie needs to be submissive at home. The depressing answer is that she goes running at night “until I forget that I want anything at all.” The final shot of the episode has Wendy doing the same.

I am very interested in seeing where this storyline goes, because how much longer can Wendy realistically sacrifice her happiness for the sake of her husband’s multilayered avarice?