Beat or Be Beaten 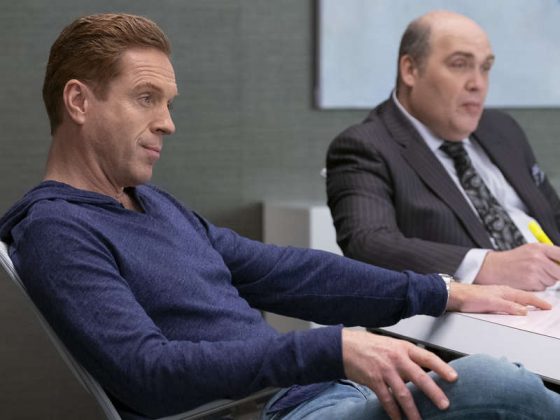 “Wendy,” he says, as she looks at his battered body in shock, “what I did tonight I cannot live without.”

It’s funny that “Billions” has moved Chuck and Wendy’s sadomasochism to the forefront of the story. Even though a depiction of that aspect of their relationship opened the entire series, I don’t think I ever appreciated what an effective analogy it is for the behavior of, well, pretty much everyone on the show. No one here seems fulfilled unless they’re giving or taking a beating.

In this week’s episode, the prime mover in that respect is Chuck, and not simply because of the physical beating he sustains. Having regained his crown as king of New York’s legal jungle, he is constantly seeking ways to destroy his foes before they come for his throat.

Public enemy No. 1 in this respect is the United States attorney general, Jock Jeffcoat, who Chuck’s staff discovers has been making suspicious trips to the Cayman Islands. While they can uncover no further evidence that he is taking advantage of that haven for financial shenanigans, they do get a direct hit on his fellow cabinet member Todd Krakow (Danny Strong), the unctuous hedge funder turned treasury secretary.

But just as Chuck returns from the Caymans with a crooked banker named Abington (played by the “Cosby Show” veteran Geoffrey Owens, always a welcome sight on the small screen), who is prepared to spill all he knows about Krakow’s conduct, Connerty and Sacker swoop in and whisk the witness away with F.B.I. backup.

Of course, Chuck wanted Connerty to swipe the Krakow case, and in fact colluded with the garrulous and grasping Judge Adam DeGiulio (Rob Morrow) to help this happen. By taking the case, Connerty would sabotage his relationship with Jeffcoat, who would be virtually guaranteed to want to quash the investigation into his corrupt colleague.

This is indeed what happens, but the result is the opposite of what Chuck had hoped. Connerty is crushed that he won’t be able to take out the treasury secretary, yes. But he and Jeffcoat both realize this was all the work of their common enemy, Chuck. Instead of dividing them, Rhoades’s ruse has brought them closer together.

Bryan will likely need all the support he can get because amid all this maneuvering, he is also setting up a wiretap on Chuck and Charles Sr. Connerty believes, correctly, that Charles is doing dirty deeds to get a major land deal approved; he also believes, incorrectly, that Chuck is in on it. Will he find some other crime to prosecute — Chuck’s too-cosy relationship with Judge DeGiulio, perhaps — or will the whole thing blow up in his face?

It’s tough to say. On this show it often pays to be paranoid. The question is, paranoid about what? Is it worse to overstep like Connerty, or to underestimate like many others?

Wags, for example, is usually among the most cynical and suspicious characters of the bunch. But he is so blinded by his desire to look legit in the eyes of the city’s richest and most respectable financiers that he walks right into a gathering of their prestigious fraternity, in the full drag required of novices, without realizing his invitation was a setup by an old enemy. His promise of revenge is too profane for this publication even to paraphrase, but I’m quite sure it’s as sincere as it is hilarious.

Wags’s boss, Bobby, also learns the hard way that he should have been more cautious. Turns out that during his brief hiatus from running his company, Taylor adjusted his contract with one of his proxy traders, Victor Mateo (Louis Cancelmi), to make their allegedly untraceable relationship a whole lot more traceable. Now Victor is in hot water for shady conduct with a research firm, and Axe could wind up boiling along with him. It’s “a Trojan Horse time bomb,” as Wags puts it.

Bobby’s first attempt to defuse that time bomb is to ask Chuck to take over the case against Mateo and make it go away. But Rhoades realizes that all the heat on him from Connerty and Jeffcoat would only draw more attention to the matter, and begs off. So Axe is left with only one other option: buy the research firm to silence its chief executive, shut down Mateo’s firm to end its threat, and force Victor into what’s essentially indentured servitude, back with the grunts at Axe Cap.

Axe has yet to make a meal of his top target, Taylor Mason, but not for lack of trying. At one point early in the episode, he and his black-ops guru, Hall, actually skulk around a rooftop across from one of Mason’s facilities, dressed in black and casing the joint like heroes in a Marvel-Netflix series. Taylor, of course, is aware of Axe’s vindictiveness; Doug Mason, the brainiac hedge-funder’s aerospace engineer father, has been made aware as well, and their joint business venture is closed up tight.

Not tight enough, though. Under the guise of friendship, Wendy has resumed contact with Taylor — and begun combing through old therapy files, looking for a weakness to exploit. She finds one in Doug, whose failure has haunted his child for years. A not-so-chance meeting with Taylor’s right-hand man Mafee, whom Wendy is an old hand at manipulating, gives her enough info to determine which company the Masons are partnering with to make Doug’s dream a reality.

Possibly venting the rage that she is prevented from taking out on her narcissistic husband, Wendy presents Axe with truly vicious plan: Instead of destroying Doug’s new venture himself, he can arrange things so that Taylor is the one who has to do the deed. The breach, and the damage to Taylor as a result, will be irreparable.