There can be only one left standing 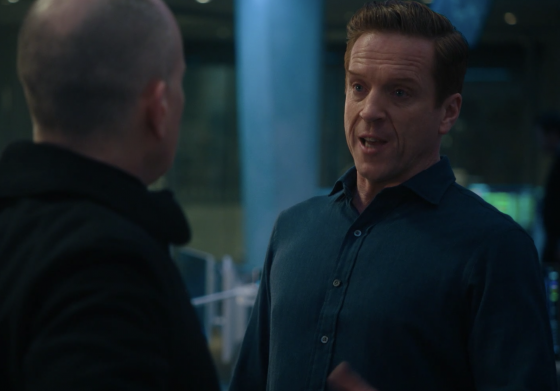 Much like “Golden Frog Time” before it, the penultimate episode of season four is Billions at its best. It’s a twisty, sometimes confusing, always entertaining episode that establishes the season’s endgame while also asking “are you surethat’s the endgame?” There are so many story threads here, so many different character motivations, that it can be difficult to parse what’s really going on — and that’s half the fun. Add in every character’s propensity for lying and you get a glorious episode that deals in unreality, shifting perspectives, and perfectly sets up a finale where loyalties and relationships will be tested.

The episode begins in a panic, as Chuck Sr. has discovered that his home is bugged. He visits his son at the crack of dawn to deliver the news—Chuck has no interest in the details of booze, drugs, and floor sex that led to the discovery—and they hatch a plan. Chuck Sr. goes on the lam, updating his son on his situation via burner phones, and Chuck Jr. decides he has to kick his moves against Jock into high gear. So, he calls in favors with multiple people, and sends them on a hunt to discover why Jock is so desperate to prevent blockchain voting.

Chuck also needs a favor from Axe. He needs to borrow his best safe-cracker in order to get the papers that prove the deal with Krakow. Axe obliges, but he’s angry that Chuck hasn’t done anything about Taylor yet. Their already tentative partnership is starting to fray…a common theme throughout “Lamster.” So, Axe sends Hall to do the dirty work, while Bryan shows up with his brother Jackie. The brothers manage to get in and out before Hall comes in, creating a lifted fingerprint that gets Bryan into the safe, and gets him photos of the documents. Hall, for his part, notices the painting is askew when he enters. I think there’s more to this scene than the show is letting on, and the finale will fill in the blanks. Personally, I think Hall knew this was coming, and Bryan is going to be trapped. He’s going down by the end of the season.

For now though, Chuck is still going after Jock. His buddies learn that Jock is stealing elections by rigging votes. He’s already installed two Governors of his liking, and now he’s working on a Senate seat. Jock is “eyeballs deep in election fraud,” and so Chuck goes to someone he believes he can trust. He calls Kate, meets with her, and gives her the details, telling her to open a DOJ investigation, and offering to coach her how to keep it hidden from her boss. She turns right around and tells her boss all about it, in exchange for a position as the head of the Civil Rights Division. Again, I’m not sure that what we see here is the truth. Kate’s loyalty to Jock doesn’t feel real to me, and that American flag pin—and those cufflinks—is Chekov’s gun just waiting to be fired. It means something; perhaps it’s a wire, Chuck fighting back.

With Chuck breathing down his neck, Jock makes his play against the old man, having the FBI detain Chuck Sr. Jock questions him himself, leaning on a lie about having a witness in the form of the man who secured the land deal for Chuck Sr.’s development project, a man only named as “the idiot.” Sr. calls his bluff though, and that leaves Jock ordering Bryan to get the recording, the one they can’t legally listen to, so that they can discover who this man is and pressure him into being a witness. I can’t help but wonder if Chuck and his father set all of this up, if this is all part of the plan. How much do they know, and were they anticipating Jock lashing out in this way? Jock’s order to Bryan feels like a dangerous move that could play right into Chuck’s hands.