One of my favorite things about my favorite TV show is how it showcases the New York dining scene from hole-in-the-walls to neighborhood gems to Michelin-starred restaurants. And it has been my pleasure to share the information about restaurants appearing on the show first in my weekly recaps and then in a full dining guide by the end of the season for Season 1,  Season 2, Season 3, and Season 4.

Fan Fun Billions dining guides are some of the most popular posts  on the blog and even some leading media outlets have noticed. Look what Forbes Magazine says about us!

“There are posts on actor Damian Lewis’s official website, that diligently track, with screenshots, all the food locations featured in every season. These posts even manage to name-check the take-out Chinese in one scene as the beloved eatery Wo-Hop.”

This is a bittersweet moment to kick off our Season 5 dining guide since New York restaurants have been closed (with the exception of take out and delivery) since mid March due to the Covid-19 pandemic with many restaurant workers out of jobs and some small establishments closing permanently. And if even Daniel Humm, the chef-owner of  three Michelin starred restaurant Eleven Madison Park, which appeared on Billions in last season’s Episode 7 Infinite Game, is saying that there is a possibility they may stay closed after the lockdown is over, there will certainly be changes to the vibrant dining world of New York City when this is over. I am hoping with all my heart that we go back to normal sooner than later and most of the city’s restaurants survive the crisis.

I describe each restaurant/bar that makes an appearance or gets a mention in Billions Season 5 below with a picture of the scene as a refresher, a link to the establishment’s website, its location as well as its Yelp review where available. I really hope you have a chance to try one or several of these places when the lock down is over. Please let me know if I am missing anything and I am happy to add it to the list.

The one with Chuck being transparent with Kate about Axe Cibao Restaurant: Classic Cuban dishes served in a no-frills setting with counter service. And thanks to DA Gramm, we now know why they call plantains “mangu” in Dominican Republic 🙂

The one from where Lauren has special room service delivered to Ms. Kashkhouk You can hear Billions co-creator and show runner Brian Koppelman talk to Meyer on his podcast The Moment here. Peter Luger Steak House:  Truly a city institution, Peter Luger is an old school steakhouse serving aged beef since 1887. Their specialty is porterhouse. One thing you have to know about arguably the best steak house in New York is that they do not accept credit cards. However, even though they do not advertise it, they accept debit cards. You are welcome! 🙂 Peter Luger got its first mention in Billions in Season 1 where Chuck Sr said he would go there for dinner with his friends and it appeared on the show in Season 3 Episode 11 Kompenso where Chuck and Ira shared a porterhouse and became friends again. And now the restaurant gets another mention as Chuck and DeGiulio plan to go there for an early dinner to celebrate De Giulio becoming the Solicitor General – the judge is paying! 🙂

And here is what the Billions writers have to say about the place:

Peter Luger Steak House was opened in 1887 in Brooklyn. New York Times critic Pete Wells gave the restaurant a 0-star review in 2019, but we at Billions respectfully disagree: https://t.co/RJsKv5uaZk

The one whose chef cooking for The Mike conference dinner 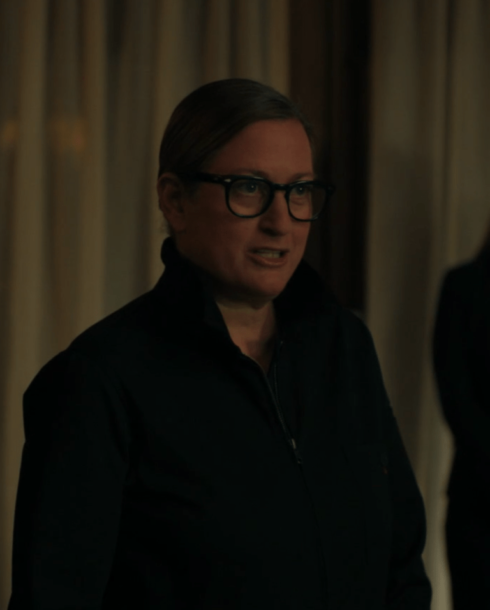 Lilia: If Bobby Axelrod is a carnivorous monster, I am a pasta monster! And Missy Robbins who makes a cameo on Billions as the chef cooking for Mike Prince’s conference dinner at the Mohank Mountain House, is without question one of my (and also President Obama’s) culinary heroes!

Lewisto and I have followed Chef Robbins and her divine cooking for over a decade from Spiaggia  in Chicago to A Voce on Manhattan… And finally to her own restaurant Lilia in Williamsburg serving fantastic Italian fare and homemade pastas in a spacious room that used to be an auto body shop and one of the “hardest to secure a table” restaurants in New York.

Chef Robbins serves her signature Mafaldine with Pink Peppercorns and Parmagiano Reggiano to the conference attendees in the episode. This is the chef’s take on the classic cacio e pepe and you can find the recipe here. 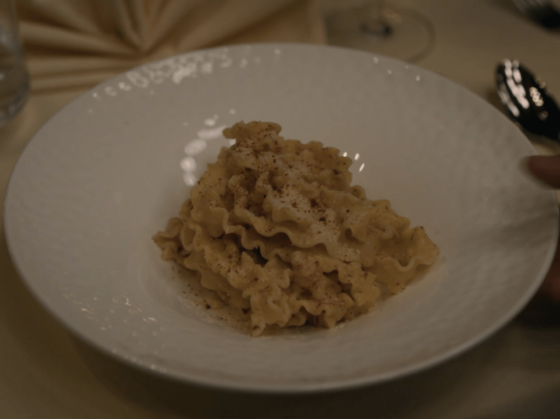 The one with the “from the oven to the mouth” pizza

Una Pizza Napoletana: Self-taught chef Anthony Mangieri opened Una Pizza in a tiny space in East Village in early 2000s serving only and only Neapolitan Pizza. Later, he moved his pizzeria to San Francisco for a few years, but now, lucky us, the chef is back and Una Pizza now serves small plates as well desserts next to the to-die-for pies at its new industrial space on the Lower East Side. They also have an all-Italian wine list that focuses on natural winemaking — totally a soft spot for wine snobs like yours truly! There is now a new branch in New Jersey – Mangieri’s home state. 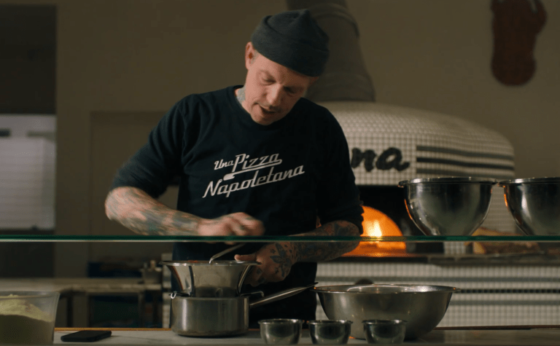 The pizzeria made its first appearance on the show in Season 4 Episode 5 A Proper Sendoff where Axe and Rebecca had a double date with Chuck and Wendy and chef Mangieri personally served them. And now Chef Mangieri is allowing his pizza to travel ONLY for Axe! Given that Axe calls him “my new pizza guy” Una Pizza Napoletana  seems to be replacing Bruno’s pizzeria in Billions.