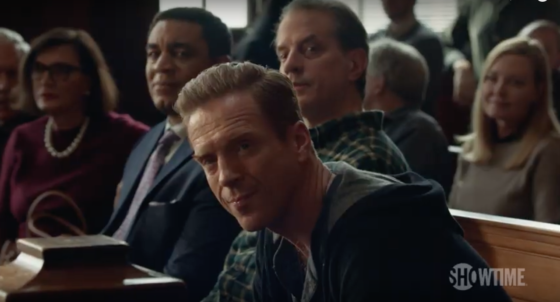 How good is Bobby Axelrod when it comes to grandstanding? We thought he couldn’t get more Axe-y than last week’s “Greed is good” speech, delivered to an auditorium full of privileged youngsters. Apparently, he was just getting warmed up for tonight’s opportunity zone bid, which saw Yonkers, New York’s native son pouring his heart and soul into revitalizing his old neighborhood, or “ancestral lands,” as he arrogantly puts it at one point. Here’s the thing about Axe’s plea: I believe he believed he was sincere, and not just because he gave a shoutout to Ricky’s Clam House. At that moment, he was playing to win, which means he would do whatever it took to secure that deal, despite all the warning signs that he would bail.

That’s what made the final scene of this episode such a melancholy one. (The use of Mötley Crüe’s “Home Sweet Home” didn’t hurt either.) I wasn’t surprised in the slightest that, after Mike Prince conceded his defeat over the Yonkers opportunity zone, Axe immediately reneged on his promise to have dinner with Savion Williams (Akili McDowell), the 14-year-old African-American kid who now lives in the billionaire’s childhood home. Now that he’s triumphed over Mike, he realizes what we knew all along — That win was all he was after in the first place, regardless of how well he convinced himself otherwise. We could see that Savion was a pawn in his game, even if Axe couldn’t.

The end of “Opportunity Zone” may have ended on a down note, but like so many of the episodes written by co-showrunners Brian Koppelman and David Levien (who were joined by Emily Hornsby for this one), the characters are now strategically positioned for Billions’ next act.

While this episode had Axe wooing Kate Sacker’s businessman father, Franklin (Harry Lennix), as a partner in the Yonkers opportunity zone, it turns out that these two are also going into banking together — and Chuck, still champing at the bit to entrap Axe, is more than eager to follow where that trail leads. Kate, now living in the working-class district where she’s seeking a congressional seat, appears to be letting the chips fall where they may with regards to her father and his questionable business choices. Without missing a beat, she sees right through Axe’s decision to team up with her father: Franklin is black and has a daughter with a high-powered job in the state attorney general’s office (though I think Wags’ “diversity business partner from New York” label wins the “Most Outwardly Politically Correct But Still Cringe-Worthy” award). She tries to warn Franklin that he’s playing with fire, but he doesn’t listen, forcing her to make peace with his decision.

As for Mike Prince, I think it’s safe to say that Chuck greased the wheels for his late-night conciliatory call to Axe. As soon as Chuck found out Mike is Axe’s real enemy, he attempted to recruit the nice-guy billionaire. Mike, however, let it be known that he doesn’t want to be sucked back into a life of playing dirty. But there is no way that Mike didn’t have an ulterior motive when he placed that 11th-hour phone call: I think he played with Axe’s mind just enough so he would abandon the opportunity zone project, allowing Mike to swoop in and save the town like the hero he’s fashioned himself to be.

This episode also kicked off a great Chuck arc courtesy of two words: Julianna Margulies. Never mind that the New York State Attorney General is clearly about to have his hands full going after Axe and his banking venture; his new teaching gig up at Yale just got way more exciting, and I am all in on both plot lines. Margulies plays Catherine Brant, a sociology professor and author who quickly gets on Chuck’s good side while sitting in on his first criminal law class. After Chuck and an unprepared student reenact this scene from Legally Blonde, which leads to a generational debate over coddling vs. tough-love teaching methods, Catherine tells the students to shut up and lean in. Later in the episode, Chuck, having initially declined Catherine’s invitation to attend her lecture on his now-infamous speech (yeah, that one), reconsiders his decision and opens himself up to a discussion on his private life. Could this be a sign that his self-improvement goal is for real?

Another character focused on self-improvement this episode is Wags, who, having reconnected with his born-again-Christian son, George, is still on a mission to atone for his years of terrible parenting. But Wags is oblivious to the fact that his failures as a father can’t be fixed with Band-Aids like baptism or Tinder. It’s an earnest storyline that you normally wouldn’t expect from Billions, yet it works well, because, like Axe, Wags does feel in his heart that he can do better, and he’ll go to the ends of the earth to make that happen — even if it ends up hurting more people, which it inevitably will. Wags agrees to George’s offer to be baptized, but all a full-body drenching does is give Wags the worst, most selfish idea possible: The only way to get things right as a “paterfamilias” is a “do-over.” So, he’s gonna have another child. This kid isn’t even conceived yet and already I’m mourning his or her future.

Finally, the last thing I expected to see at the start of this season was Wendy and Taylor forming a solid partnership. To be fair, even though Wendy spent much of season four cruelly manipulating Taylor, season five has slowly built to this collaboration, so we might as well go with it. The truth is, Taylor is flailing. Not only did they lose their COO, but Taylor cannot deny how happy Mafee (Dan Soder) is back among his onetime Axe Cap pals (his boxing match with Dollar Bill apparently forgotten). They need to do something big to be effective again, while still holding tight to their principles, to prevent Mason Capital from being absorbed even further back into Axe Capital. So, with Wendy’s help, Taylor masterfully persuades a Big Oil CEO to go the environmentally friendly route. High off of their successful meeting, Taylor suggests Wendy partner up with them to turn Mase Cap into an impact fund. Wendy doesn’t immediately say yes to the offer, but I think she’s more than tempted by the idea.

I know that Axe and Taylor are at a frosty détente at best, so I can’t wait to see how this new Taylor-Wendy relationship is going to affect the Axe dynamic. Can’t imagine it’s going to run smoothly.

Could that be part of Taylor’s ultimate plan?