Axe Goes Back to Where it All Started, and Gets a Big Surprise 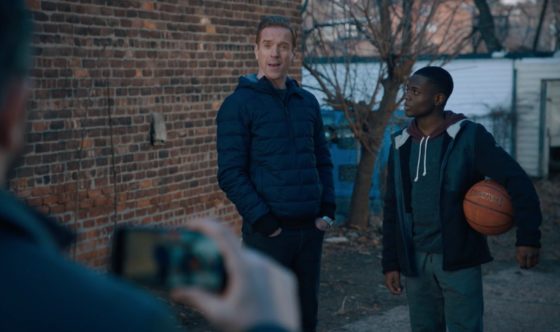 There’s really no place like home, especially if you’re planning to use that place as part of a PR move to give your reputation a more squeaky-clean look and feel. That’s what Axe is doing at the start of this week’s episode of Billions. He’s visiting Yonkers, where he grew up, shooting hoops with a teenager who lives in the house that Axe grew up in. It isn’t long before one of Axe’s guys starts filming the whole thing as Axe launches into his story about building his business from the ground up, starting with shoveling snow in Yonkers. The visit leads to an article in the paper, and it gets the ball rolling on the episode’s main narrative focus: the battle over an Opportunity Zone, which is a section of Yonkers that’s offering tax breaks in order to bring in new development.

Axe wants in, and because he’s trying his best to present a wholesome image, he says it’s because he still has his roots in Yonkers. Behind closed doors though, he’s telling Wendy that he’s largely doing this because it gives him room for other deals and to make money elsewhere. It’s a good investment. What’s great about this episode is the way the setup allows for the usual expectations, and then completely subverts them. For the first 20 minutes of the episode or so, it’s looking like this is going to be all about Axe squaring off against Prince in an attempt to land the Yonkers Opportunity Zone, with all the big talk, backroom dealing, and intimidation that comes with that. But before long the episode is using this setup to deliver a character-driven story, one that’s also surprisingly emotional.

I think it’s fair to say that this season, and even part of the previous one, hasn’t been Billions at its best, and that’s largely because the characters were starting to feel a little complacent. We’ve been watching Chuck and Axe do their thing for a while now, and the first few episodes of this season, however entertaining at times, was a lot more of the same. Other than Chuck and Wendy’s marriage coming to an end, it was starting to feel like the show was forgetting about the interior lives of its characters, which is what grounds the more outlandish material. Thankfully, this is a more complicated, compelling hour because it’s so focused on the characters, namely the dissonance between what they’re feeling and what they’re saying.

In fact, much of this episode is about these characters trying to “find/define” themselves in one way or another. Every story this week is about identity in some form, which begins to move the characters in some interesting directions. Let’s start with the smaller stories of the week. There’s Wags, who’s having a true identity crisis about his role (or lack thereof) as a father. His daughter became a stripper and his oldest son is devoutly religious, and he’s not sure which one he’s more disappointed in. So, he goes off the deep end. He decides it’s time to find a young woman to carry a new baby, his last chance at molding a child in his vision. God only knows where this leads, but with Wags involved you know it’s going to be like watching a car wreck in slow motion.

Then there’s Taylor, who’s struggling to see themselves as the person that once went up against Axe and took him to his limit. Who is Taylor now? They’re not sure, but they want to figure it out. When a meeting with an oil executive goes off the rails, Taylor has to search for a new way forward, for a new way to be in this world. So, they team up with Wendy, secure a second meeting, and manage to convince the steak-eating bigwig to lead his oil company into a greener future; it’s the “activist play,” allowing the company to tout its environmental bonafides while really changing course in order to make a ton of money. Now, Taylor sees a future, and they hope that Wendy will join them in landing more oil companies and more money. The question is, will Axe have a say in this? Or is this Taylor looking to secure their own future separate from him?

Still, it’s our central characters who are grappling most with their own legacies and what it means to be a leader in this world. As Mike Prince realizes he’s going to lose out on the Yonkers bid, Chuck offers him a potential out. He tells him to pledge a donation to the city, no matter the outcome of the board’s decision, suggesting that the move will make Axe think Prince is trying to buy the Opportunity Zone and push him into doing something illegal to make sure he wins. Then Chuck will be there to catch Axe redhanded. The thing is, Prince prides himself on doing the right thing. He remembers the person he used to be; selfish and ruthless and unable to connect with those around him. He doesn’t want to go back to that, and he sure as hell doesn’t want Axe to be the reason why he gives up his moral standing.

So, Prince calls to congratulate Axe on getting the Yonkers Opportunity Zone, refusing to take Chuck up on his offer. Will this moral stance last? Will he be able to sustain those ideas if Axe continues to win? Maybe he can. Maybe Prince is a different kind of business leader.

And that brings us to Axe. He gets exactly what he wants here, and yet he’s still unhappy. He seems so alone and confused and unsure of himself. He admits he’s not an emotional guy, and yet we can see that he’s struggling with something. One of those things is obvious: he has feelings for Wendy, and she doesn’t seem to reciprocate them. He’s not one for quiet moments, and yet here he is in his home, enjoying a quiet moment at dinner with Wendy. He’s practically glowing he’s so happy. But his angst, his restlessness, might be rooted in more than just his feelings for Wendy. Perhaps Prince’s moral stand has him questioning his own path. Add in a lengthy visit to where he grew up, and perhaps he’s wondering about the man he’s become.

Or maybe he’s just sick of…